Automotive LiDAR Market size surpassed USD 150 million in 2017 and is anticipated to grow at over 40% CAGR from 2018 to 2024. Increasing research activities for the development of the autonomous vehicles will fuel the industry growth.

The automotive manufacturers are evolving to cope up with the changing market dynamics and collaborating with the tech giants to achieve the goals of self-driving cars. The players such as General Motors, Waymo, Uber, and Apple are engaged in developing their own self-driving vehicles. These companies already started testing their self-driving vehicles on the roads and are looking forward to the mass-production for commercialization of such vehicles by 2020. As LiDAR is the key enabling factor in the autonomous vehicles, the mass production of autonomous vehicles is augmenting the demand for LiDAR sensors. 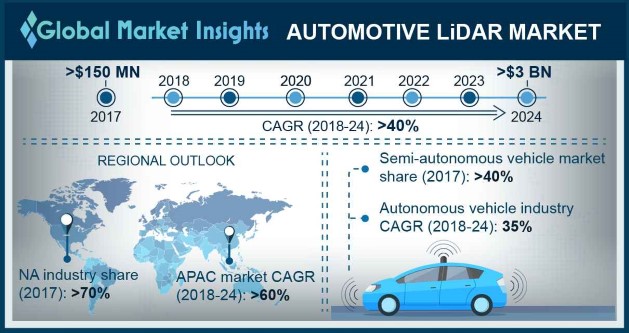 The mechanical LiDAR is expected to lead the market owing to growing demand in autonomous vehicles. It has been widely used in the self-vehicles due to its high accuracy and reliability in ADAS applications. These sensors are also integrated into the new functionalities such as 3D mapping and car-surround sensors. However, the expensive nature of the mechanical LiDAR technology has restricted its use in the semi-autonomous.

The solid-state automotive LiDAR market is estimated to grow substantially through 2024. The solid-state LiDAR technology is currently in the development phase and is not commercialized yet. Moreover, the technology is gaining a lot of traction as it is cost-effective, faster, and provides high-quality data as compared to conventional LiDAR sensors. Additionally, the companies are conducting various strategic initiatives to accelerate the innovation process.

The semi-autonomous vehicle segment captured more than 40% market share in 2017 driven by the rapid integration of the advanced driving assistance systems into the vehicles. The LiDAR sensors have been used extensively in semi-autonomous vehicles to enable traffic adaptive cruise control & lane keeping. It enables the cruise control system to automatically handle the acceleration and braking functionalities without any human intervention. It also provides the lane keeping system with steering inputs to keep the vehicles within the lane.

North America dominated the automotive LiDAR market with around 70% share in 2017 propelled by increasing research activities for the development of autonomous vehicles in the region. The supportive government policies related to the testing of autonomous vehicles and investments for driving the research activities by the government have also fueling the market growth.

Asia Pacific market is poised to witness 60% CAGR through 2024 led by research activities and investments in autonomous vehicles by the Chinese players. The favorable government initiatives in countries including China, Japan, and South Korea to commercialize the self-driving car are also estimated to augment the regional market demand.

The industry players are forming partnerships with other LiDAR developers and conducting R&D activities to strengthen their product portfolio and to expand their market share.

The market research report on automotive LiDAR includes an in-depth coverage of the industry with estimates & forecast in terms of shipments in units and revenue in USD respectively from 2016 to 2024, for the following segments:

The market size of automotive LiDAR crossed a value of USD 150 million in 2017.
The industry share of automotive LiDAR will witness CAGR of over 40% up to 2024.
APAC market will grow at a CAGR of over 60% during the forecast timeline driven by research activities and investments in autonomous vehicles by the Chinese players.
North America is leading the global industry with over 70% share due to presence of prominent automakers and technology startups, along with strong government support towards the development of autonomous cars.
According to the analysts at GMI, the autonomous vehicles in the market will observe around 35% growth through 2024.
Mechanical LiDAR is widely being deployed in autonomous vehicle applications owing to its reliability, high accuracy, and the ability of the sensors to offer 3D mapping features.
Customize this Report
Inquiry Before Buying