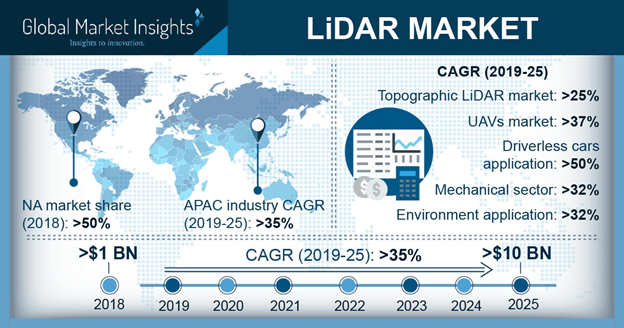 There has been an increasing demand for advanced mapping solutions, such as LiDAR, due to the rise in surveying & excavation activities across the globe. The LiDAR technology provides an extensive amount of accurate & quality information for various applications. It is significantly more accurate and offers higher resolution images as compared to other traditional methodologies such as aerial mapping. The emergence of the LiDAR technology has brought a paradigm shift in the terrain mapping landscape as it has been widely used for a range of applications such as floodplain mapping, forest inventory, hydrology, geomorphology, landscape ecology, survey assessments, and costal engineering & volumetric calculations. All these applications use the LiDAR technology to conduct analysis, manage, visualize, and disseminate data, supplementing the growth of the LiDAR market.

The solid-state LIDAR technology is gaining a lot of traction among automakers across the world as the technology is faster and cost-effective compared to the traditional LiDAR solutions. The use of the solid-state technology can reduce the price of a single LiDAR unit below USD 100. This significant price reduction of LiDAR devices can accelerate the development of the autonomous technology exponentially. Currently, the expensive nature of LiDAR hardware is the primary factor preventing the adoption of LiDAR market in the large-scale manufacturing of autonomous cars.

The UAVs in LiDAR market are anticipated to register a growth rate of over 37% over the projected time duration.  The primary factor that is propelling the integration of LiDAR devices in Unmanned Aerial Vehicles (UAVs) is the emergence of smaller LiDAR sensors. The LiDAR sensors mounted on UAVs are equipped with sophisticated photogrammetry software that can process high-resolution images rapidly in the cloud, enabling various stakeholders and relevant parties with real-time actionable insights. The UAV-based LiDAR sector has been growing rapidly over the last five years since manufacturers, such as Leddartech, Geodetics, Velodyne, Routescene YellowScan, and Riegl, have ramped up their efforts toward engineering LiDAR sensors for small-sized drones.

The mechanical LiDAR market held over 90% shares in 2018 due to its increasing usage in driverless cars. It has been extensively used in autonomous vehicles due to its higher reliability & precision in Advanced Driver Assistance Systems (ADAS). The technology has also been adopted for machine vision applications in the manufacturing sector to enhance safety and productivity. However, the bulky & expensive nature of a mechanical LiDAR is preventing its usage in certain industries with budgetary and space constraints.

The solid-state LiDAR market is predicted to grow substantially during the forecast timeframe. The technology is currently in its development phase and is yet to be commercialized. It has received a lot of interest from automobile manufacturers as it has the potential to drive the cost of manufacturing a driverless car substantially and generate higher resolution data as compared to conventional LiDAR solutions. The companies operating in the LiDAR landscape are undertaking various strategic initiatives to identify new & innovative ways to develop solid state LiDAR sensors.

The corridor mapping segment held over 30% revenue shares in the LiDAR market in 2018 due to the increasing demand for LiDAR data in infrastructure and network management services in various sectors such as utilities, railway, roads, and oil & gas. The corridor mapping enables high resolution mapping of artificial infrastructures, networks, and natural corridors with linear development including railways, pipelines, coastal sections & rivers, powerlines, and roads. It seamlessly maps and scans inspected lines by thoroughly processing 3D point clouds for extracting the data necessary for characterizing elements of interest. 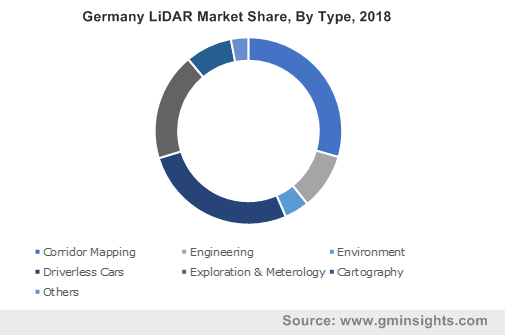 The driverless cars LiDAR market is predicted to witness a CAGR of over 50% due to the growing number of research activities to produce autonomous cars. The existing automobile suppliers are scaling their operations to keep up with the increasing demand for automotive LiDAR systems. Suppliers have conducted various collaborative efforts for establishing new production facilities to support a large-scale manufacturing of advanced automotive LiDAR devices. The expensive nature of the existing LiDAR devices is a key factor restricting its adoption in driverless cars.

North America region dominated the LiDAR market with a industry share of over 50% in 2018. This is attributed to the presence of prominent automakers and the rising investments on accelerating innovations in the LiDAR landscape. The extensive usage of the LiDAR technology across various industry verticals is further adding to the growth of the LiDAR market. Moreover, consumers in the region have been using these drones for various recreational purposes.

The Asia Pacific LiDAR market is estimated to grow at a CAGR of over 35% during the forecast time period due to the increasing usage of drones for various applications such as cartography, agriculture, and corridor mapping. The rise in the number of smart city initiatives is driving its adoption for flood mapping, urban modelling, and forestry applications. The increase in the number infrastructural activities in countries, such as China, India, and Japan, has generated a myriad of opportunities for the expansion of the LiDAR market.

The LiDAR market comprises large players such as Leica Geosystems, Velodyne, Trimble, and Optech. The companies are adopting inorganic growth strategies to solidify their presence in the market. For instance, in July 2016, Leica Geosystems purchased assets from P3D Systems, a 3D laser scanning solution developer. This acquisition is aimed at enhancing its existing LiDAR portfolio. The enterprises are investing on the development of customized LiDAR devices for various applications to better position themselves in the market. Start-ups are conducting various fundraising activities and collaborating with other companies working on the LiDAR technology. For instance, in September 2017, LedderTech, a developer of LiDAR sensors, raised a funding round of over USD 130 million from Delphi, Osram, Integrated Device Technology, and Magneti Marelli to accelerate its ASIC development efforts and expand its ongoing LiDAR development programs.

The Light Detection and Ranging (LiDAR) is a widely-accepted technique for generating precise & directly georeferenced spatial information of the shape & surface characteristics of the Earth. Technological advancements in LiDAR mapping systems and their enabling technologies have driven their adoption across various industry verticals. It has become an established method to collect highly-dense & accurate data across various landscapes, shallow water areas, and project sites. Its active remote sensing capability is analogous to radar but uses laser light pulse rays instead of radio waves. The technology has been extensively used for surveying & engineering applications due to its ability to produce high accuracies and point densities, enabling the development of precise & realistic 3D representations of infrastructures such as roadways, railways, buildings, bridges, breakwaters, and other shoreline structures.

The market size of LIDAR was valued over USD 12 billion in 2018.
The industry share of LIDAR is projected to witness 6% growth rate during 2019 to 2025.
LiDAR technology has brought a major shift towards the terrain mapping landscape as it is used for an extensive range of applications including forest inventory, geomorphology, and floodplain mapping.
Asia Pacific market is estimated to grow at a CAGR of over 35% during the forecast period due to increasing use of drones across applications like agriculture, corridor mapping, and cartography.
According to the analysts at GMI, the driverless car application segment in the market is predicted to witness a CAGR of over 50% from 2019 to 2025.
Machine vision applications across the manufacturing sector have been adopting mechanical LiDAR to enhance productivity and safety, accelerating LiDAR market share.