Conductive Polymers Market size worth over USD 6 bn by 2025

Conductive Polymers Market size will exceed USD 6 billion by 2025; according to a new research report by Global Market Insights, Inc.

Growing need for antistatic material for safe packaging & coating of electronic and related equipment, that are vulnerable to electrostatic damages will primarily drive the conductive polymers market share during the forecast spell. Electroactive polymers are majorly used as anti-static packaging material to shield devices against any type of electromagnetic disturbances. The working of nearby electronic devices emits electromagnetic frequencies, that interfere with that of other electronic devices in periphery, thereby affecting the overall performance which may result in device damages and lower its overall lifespan. Global electronics industry stood at USD 2.8 trillion in 2018 and it is poised to grow at 4% year on year. According to a study conducted by NASA, ESD not only causes high part replacement cost, but also results in greater spending on the repair labor, logistics and disposition. These factors will eventually drive conductive polymers market demand in near future.

Advancements in automotive industry with technologies such as artificial intelligence and self-driving cars is further expected to grow at a decent rate due to rise in production of electrical vehicles. This will eventually propel demand for sensors & actuators that utilize conductive polymers. Europe is one of the largest market for automotive sensors. According to the European Automobile Manufacturers Association, 19.6 million motor vehicles were manufactured in Europe in 2017, contributing to 20% of the global production. Increasing automobile demand especially in developing nations will drive the conducting polymer-based sensors over the forecast period. However, inherently conducting polymers are observed to lose their characteristics under uncertain environment conditions. It limits the application of ICPs in hot and moist conditions, thereby, restraining the conducting polymer market to a greater extent. 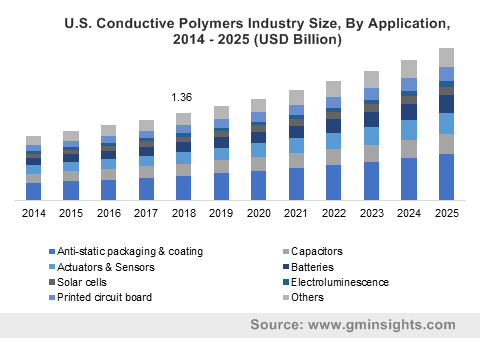 Conducting polymers are segmented on the basis of conduction mechanism, which includes, conducting polymer composites and inherently conductive polymers. It is sub-divided into ABS, polycarbonates, PVC, PP, nylon, and others. Among the composites, ABS type of conducting polymers held a prominent share of over 25% in 2025, owing to low cost and high-quality conduction performance demonstrated by ABS material. On the other hand, inherently conductive polymers are a class of polymers that were observed to conduct electricity due to its chemical structure bonds. It includes, polyaniline (PANI), polypyrrole (PPy), polyphenylene vinylenes (PPV), PEDOT, and others. Polyaniline type of inherently conducing polymers have the highest conductive polymers market share owing to its large-scale applicability in printed circuit board manufacturing for corrosion protection.

In 2018, anti-static packaging & coating applications generated the highest revenue of over USD 950 million. In addition, growing utility in solar applications, where the product is utilized as a deposition materials for enhancing conduction electricity capacity will create lucrative opportunities for the market.

North America will have the largest share of the conducting polymer market by 2025. Rise in complex electronic equipment manufacturing, related continuous R&D efforts, innovations in enhanced performing PCBs and overall miniaturization of electronic parts will fuel the product demand in North America by 2025.

Conductive Polymers market research report includes in-depth coverage of the industry, with estimates & forecast in terms of volume in tons and revenue in USD million from 2014 to 2025, for the following segments:

Conductive Polymers Market
Contact Us  Request Free Sample
Top
We use cookies to enhance your experience. By continuing to visit this site you agree to our use of cookies. More info X