Global Conductive Polymers Market size was more than USD 3.5 billion in 2018 and will witness around 8.0% CAGR during the forecast timespan. 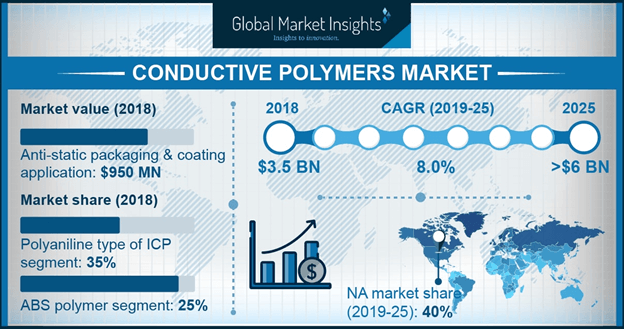 Increasing demand for anti-static packaging in the U.S. will primarily drive electrically conductive polymer demand over the forecast timeframe. Anti-static packaging is used in a variety of industries to package, store, and transport items with ESD sensitivity, with the main objective to protect the equipment from damage. Additionally, the product has potential applications where they can replace metals & semi-metals, that require greater energy in processing and fabrication. Growing applicability of the product as a result of rising portable electronic devices is subsequently, driving demand for conducting polymers market.

Introduction of electroactive polymers in molecular electronics has created lucrative opportunities in the automobile sector. Currently, the electric vehicles are being adopted as a viable eco-friendly option as compared to internal combustion automotive that result in global climate change, EV market in developed nations is poised to grow at a decent rate especially in European Union. As per the European Environmental Agency, electric vehicles sales in Europe progressed by 51% in 2017, as compared to the 2016 sales. The growing possible market for electric vehicle will drive larger demands for batteries, actuators & sensors that will eventually result in increasing the automobile functional attributes. The resulting trend will propel conductive polymer demand in the coming years.

The market is segmented on the basis of conduction mechanism into conducting polymer composites and inherently conducting polymers. In 2018, composites segment occupied the largest share in the market. It mainly includes acrylonitrile butadiene styrene (ABS), polycarbonate (PC), polyvinyl chloride (PVC), polypropylene (PP), nylon, and others. The others segment includes PET, HDPE etc. ABS type of polymer composites accounted for over 25% share in 2018 for the composite segment. It is an attractive segment owing to its comparatively superior performance. The conduction mechanism in ABS consumes lesser energy with ease in processing and high impact strength.

Intrinsically conductive polymers (ICPs) segment include polyaniline (PANI), polypyrrole (PPy), polyphenylene vinylenes (PPV), PEDOT, and others. ICPs are oligomeric or polymeric resins composed of phenylene rings. They offer efficient processability, mainly due to dispersion. The polyaniline type of ICP is a well-known polymeric compound and it holds over 35% of conductive polymers market share in 2018 as it is easy to synthesize and can be chemically modified. It is often used as a conductor in electronic bodies and electromagnetic shielding for PCBs.

Conductive bags and antistatic poly bags provide faraday cage and ESD protection. Generally, capacitors, actuators & sensors, printed circuit board and other materials prone to ESD are packaged in such flexible bags. Electroactive polymers are also used as a coating on capacitors to inhibit its resulting radiation that may affect the nearby appliances. They are also used to replace metals and semimetals used in capacitors and PCBs thereby, lowering the overall cost of the electronic part while enhancing its performance that is limited in semiconducting materials. 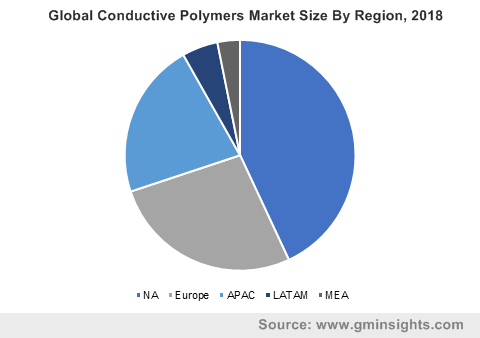 North America is anticipated to be the largest market for products over the forecast period, accounting for over 40% of the overall conductive polymers market share. Strong presence of electronics & semiconductor industry backed by presence of latest technology and R&D present in the region, especially the U.S. will drive this growth. The country is witnessing a resurgence of the innovative electronic industry even as it is challenged by the other countries such as China, Japan, and South Korea. According to the U.S. Congressional Research Service, in 2015, the U.S. accounted for about half of the global semiconductor sales, which accounted for about USD 150 billion. As per the report, the country is expected to maintain its dominance during the forecast period, making it a lucrative market for electroactive polymers.

In comparison to other regions, there is a lack of awareness about the possible future applications of organic polymers in nanoelectronics and related fields. Moreover, the product demand is projected to expand at a substantial rate in other regions, especially, Asia Pacific over the forecast period.

Earlier polymers were used as an insulators in semiconductor and electronics industry. However, with advent of conducting polymers, the polymer industry potentially introduced electrically conducting materials to reduce weight and improve efficiency particularly when doped. Polyacetylene was the first conductive material to be prepared. A number of materials were tested and are now commercially available, which are used in myriad applications such as solar energy industry, electronics, packaging, medical, textile, construction, transportation, etc. Additionally, automation and miniaturization trends in electronic and industrial devices are expected boost the conductive polymers market demand in the coming years.