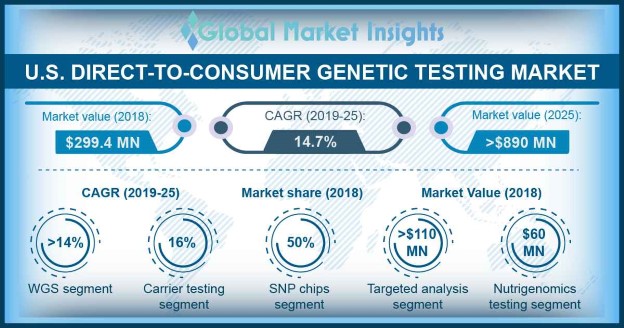 Growing public awareness regarding genetic disorders and availability of technologically advanced direct-to-consumer genetic testing kits will be a high impact rendering factor for industry growth in near future. Also, several campaigns undertaken by industry players and government have made people aware regarding benefits of early diagnosis. Direct-to-consumer genetic testing require minimum intervention of healthcare professionals and is efficient in providing access to individual’s genetic makeup that further assists in treating ailments. Aforementioned factors will positively stimulate the demand for the U.S. market over the forecast period.

Nutrigenomics testing segment of the U.S. market held around USD 60 million in 2018 and is anticipated to grow substantially by 2025. Nutrigenomic testing is used to know the interaction amongst genome and nutrients at molecular level. Moreover, it enables in detecting individual’s response to foods, beverages and supplements that assists patients to consume personalized diet. DTC nutrigenomics testing has crucial role in helping obese people to manage their body metabolism and weight control, thereby favouring segment growth.

Carrier testing segment of the U.S. direct-to-consumer genetic testing market is projected to show around 16% CAGR over the analysis period. Carrier testing is used to identify if a person is a carrier of specific autosomal recessive diseases. Carrier testing is often used by people planning for pregnancy that enable them to detect risks of their offspring inheriting genetic disorders. Thus, growing concern amongst people in analysing their own genetic makeup will fuel segment growth in forthcoming future.

Targeted analysis segment of U.S. direct-to-consumer genetic testing market was valued for more than USD 110 million in 2018 and it is anticipated to witness significant growth in coming years. Targeted analysis identifies the defects or the mutations in the genes that result in specific genetic disease. It effectively measures an individual’s genetic makeup that encodes crucial information required for detecting several ailments. Apart from benefits gained through targeted analysis, it delivers results in lesser cost as compared to the rest of alternatives available in the market. Above mentioned factors will augment demand for targeted analysis thereby propelling segment growth.

Whole genome sequencing (WGS) segment of the U.S. market is anticipated to witness more than 14% CAGR throughout the analysis timeframe. WGS enables detection of the entire genome sequence of an individual and helps in identification, characterization and mutation of disease progression. Moreover, it helps in tracking disease outbreaks and also delivers abundant data in minimum time to support assembling of novel genomes. Thus, potential to produce large volumes with the help of WGS for genomics research will boost the segment growth. 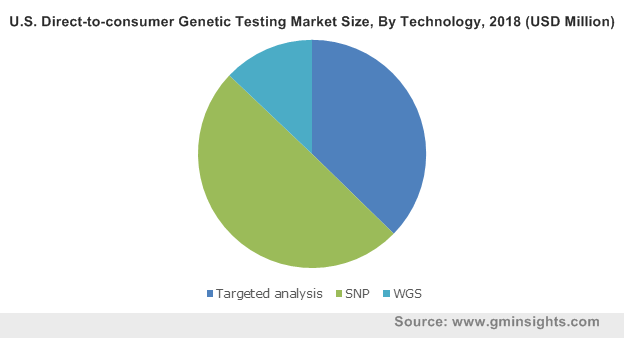