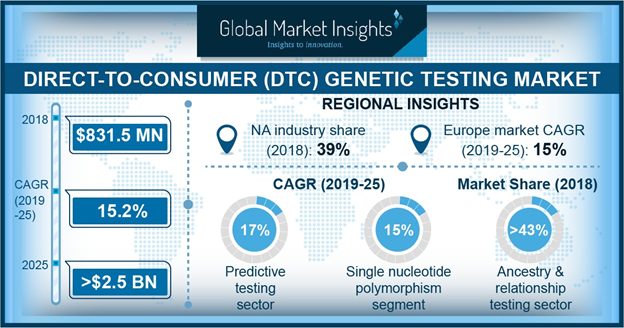 Increasing demand for personalized medications to treat genetic diseases will positively impact industry growth in forthcoming years. Individual’s genome must be tested to develop personalized medicines. This increases the demand for DTC genetic kits since, it provides detailed information about individual’s genetic predisposition. As detailed information regarding genetic makeup of individuals is easily available with the use of DTC genetic kits, researchers can easily design and develop personalized medicine that would help in faster patient recovery. Aforementioned factor is expected to drive the industry growth. However, high cost of DTC genetic testing kits may hamper industry growth to some extent during the forecast period.

Predictive testing segment will experience around 17% growth throughout the analysis period. Considerable segmental growth can be associated with rising prevalence of genetic diseases. Recently developed DTC genetic tests help to identify mutations that increase the chances of acquiring specific disease accurately. Surging awareness regarding benefits of such presymptomatic testing has reduced the mortality rates by enabling effective management of disease. Above mentioned factors have stimulated the segmental growth that is predicted to continue over the forecast timeframe.

Ancestry and relationship testing segment accounted for over 43% revenue share in 2018. Increasing awareness regarding ethnicity tests amongst the American and European population has increased the demand for DTC genetic tests. Accuracy and efficiency possessed by these tests has fostered segmental growth. Moreover, ancestry tests developed by companies such as Ancestry.com are user friendly. Availability of robust DTC ancestry tests providing meaningful clinical, genealogical and even forensic information will positively impact the segment growth.

Targeted analysis segment was valued over USD 310 million in 2018. Targeted analysis is utilized for determining the defects in genes that are responsible for a particular disorder. Targeted genotyping can accurately measure an individual's gene pool that encodes important information regarding various diseases. Targeted analysis can be conducted at significant low cost compared to other available techniques that should augment its adoption rate over forecast timeframe.

Single nucleotide polymorphism segment will experience around 15% growth throughout the forecast period. Single nucleotide polymorphism chips specifically detect changes in single nucleotide that increases the efficiency of tests. For instance, SNP chips utilized for diagnosing hereditary cancers have detected 1300 mutations in BRCA2 genes. Various companies such as Ancestry.com and Color Genomics utilize SNP arrays that analyse gene sequences at a specific resolution and reveal detailed analysis about the defective genes that may in future cause certain disease. Increasing adoption of such advanced SNP chips in DTC testing kits will trigger the segmental growth. 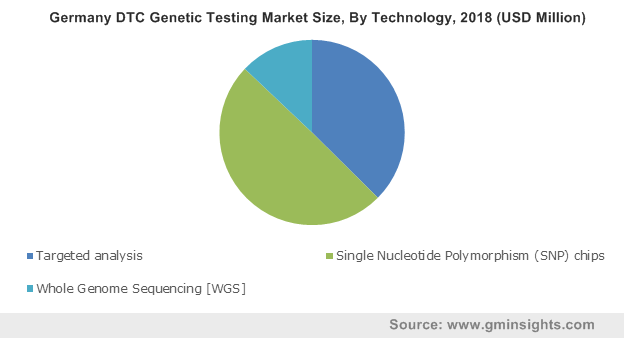 North America direct-to-consumer genetic testing market accounted for around 39% regional share in 2018. Regional market growth can be attributed to increasing prevalence of genetic diseases. Rare genetic diseases such as thalassemia, hemophilia and anaemia require continuous and critical monitoring. According to CDC, every year more than 1,000 people are affected by thalassemia. Furthermore, American population has higher literacy rate and also, awareness regarding DTC tests is high amongst the American population that augments demand for DTC genetic tests.

Europe is estimated to experience around 15% growth over the coming years. European direct-to-consumer genetic testing market is highly regulated and for carrying out some of the genetic tests through DTC kits, customers are required to have physician’s prescription. However, currently, European regulatory bodies are working on improving regulations set on DTC tests due to improved accuracy and efficiency possessed by them. Thus, improvement in regulatory scenario will positively impact regional market growth. 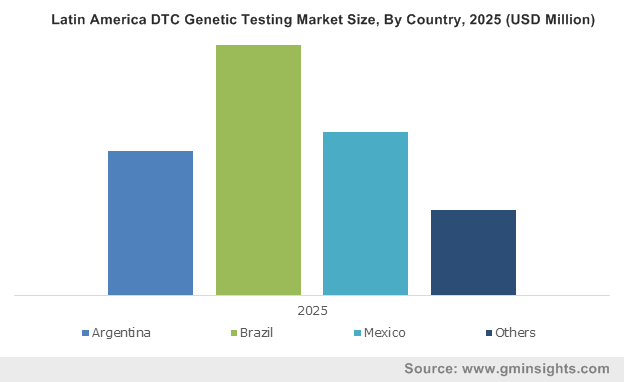 Direct-to-consumer genetic testing industry can be traced back to early 2000’s. Earlier DTC tests were thought to be convenient as they would allow the patients to access their genetic information without involvement of physician. Although, DTC genetic testing kits had several benefits, in the initial days, they were stringently regulated by regulatory bodies. Regulatory scenario has always been stringent since the introduction of DTC genetic kits in European countries. Currently, there has been change in the regulatory scenario and European countries have started receiving approval for DTC genetic kits. Defects in the DTC kits have been reduced and people have started relying on these kits. DTC genetic testing market is sort of matured in North America due to numerous technological advancements and is still in developing phase in Asian countries. With further advancements in technology, DTC genetic tests industry will experience numerous growth opportunities.