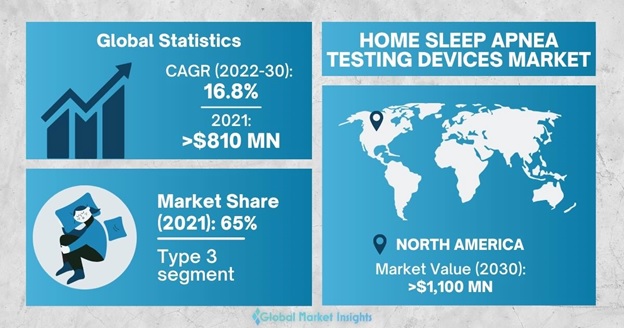 Home sleep apnea testing devices are the devices that are specifically used at home to diagnose sleep apnea disorders. There are variety of home sleep apnea testing devices with different sensors and equipment that help in collecting information regarding breathing rate, heart rate, brain activity, muscle movement, etc. Home testing has become a very convenient, cost-effective and accurate way to diagnose sleep apnea disorders.  The overnight sleep study helps the sleep technologist in reviewing complete patient condition and further prescribe the necessary treatment. Increase in prevalence of sleep apnea can be directly associated with variety of health issues and chronic diseases. Growing demand for home sleep apnea testing owing to several advantages offered by the devices will help enhance the market growth during the forecast period.

Increase in number of people suffering from sleep apnea disorder across the globe is one of the major factors augmenting the market expansion. As per the recent research article, the global prevalence of obstructive sleep apnea (OSA) is projected to be around 1 billion currently. Rise in number of sleeps centers across the globe and large number of undiagnosed population will be some of the significant factors impacting the industry growth.

The recent outbreak of COVID-19 has had a slight negative affect on the market impelled by growing risk of cross contamination and also, spread of the virus resulted in closing of the sleep centers and laboratories. As COVID-19 pandemic has spread across the world with high magnitude, the priority is given to essential procedures and elective procedures were delayed or cancelled. Furthermore, the American Sleep Association agreed with postponing elective and in-person sleep laboratory appointments. Coronavirus is known to spread through aerosols or can be present on equipment at sleep clinics, thereby increasing the risk of infection. In patients diagnosed with COVID-19 infection, the presence of obstructive sleep apnea was related with high risk of hospitalization and approximately doubled the risk of respiratory failure.

Sleep apnea is becoming more widely recognized as one of the life-shortening and life-damaging diseases. Sleep disorders including sleep apnea has become a major health issue in the U.S. in the past few years. Moreover, according to the Health Europa, at present around 175 million people in the Europe suffer from sleep apnea. Majority of the patient population that are left undiagnosed and untreated are at high risk of serious health issues such as diabetes, hypertension and other cardiovascular diseases. Various studies show that the increase in sleep apnea disorder prevalence has resulted in growing economic burden, thereby requiring more enhanced diagnostic and treatment strategies.

The portable home sleep apnea testing devices market was valued at around USD 490 million in 2018. Rising use of portable devices credited to several advantages such as ease of use, small size and easy to carry has resulted in showcasing the potential to drive the market value. Recent technological advancements have led to several product improvement such as accurate diagnosis and flexibility of device use during the sleep. 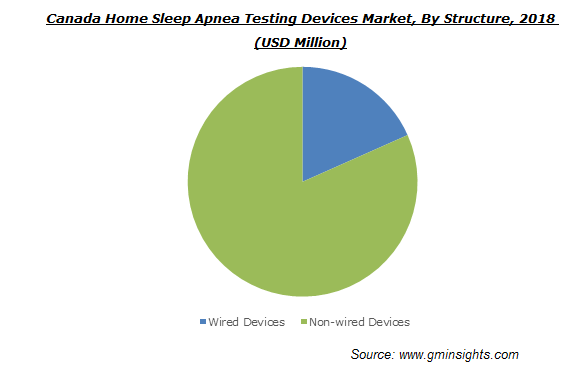 Presence of large number of sleep centers and rapidly increasing sleep apnea disorder prevalence in the U.S. will stimulate the industry expansion 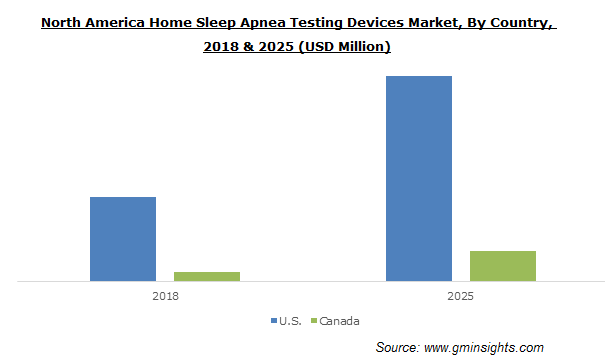 U.S. dominated the North America home sleep apnea testing devices market and accounted for over USD 175 million in 2018. Increasing number of people suffering from sleep apnea disorder in the country has resulted in augmenting the industry revenue. As per the American Sleep Apnea Association, sleep disorders, especially sleep apnea has had a significant economic impact and become a major health issue in the country. It is estimated that around 22 million Americans are currently suffering from sleep apnea, out of which, 80% of the moderate to severe sleep apnea cases remain undiagnosed. Also, increase in number of sleep centers will significantly affect the market growth.

China market is predicted to expand at a CAGR of 19% through 2025 led by changing eating habits, growing prevalence of chronic obstructive pulmonary disease and rise in awareness among the people regarding sleep apnea diagnosis at home. As per the recent statistics, currently, China has more than 2,000 sleep centers and over 40% of the Chinese population suffers from sleep disorders.

Some of the major companies operating in the home sleep apnea testing devices market include ResMed, Philips Respironics, Natus Medical, Compumedics and Contec Medical Systems. These industry leaders have been engaging into mergers, acquisition, partnerships and collaborations to expand their product portfolios and reinforce their market position. Huge investment in R&D aimed at developing new products has created enormous industry competition. Rising demand for highly effective testing devices will provide more growth opportunities for the industry participants. Commercialization and innovation in the product are the key strategies adopted by these companies for future growth perspective.

The home sleep apnea testing devices market research report includes an in-depth coverage of the industry with estimates & forecast in terms of revenue in USD & volume in Units from 2014 to 2025, for the following segments: