Fundus Cameras Market size exceeded USD 473 million in 2020 and is anticipated to grow at a CAGR of over 3.2% between 2021 and 2027. The growing prevalence of eye diseases such as cataracts, age-related macular degeneration (AMD), hyperopia, diabetic retinopathy, glaucoma among others are projected to boost the market growth. 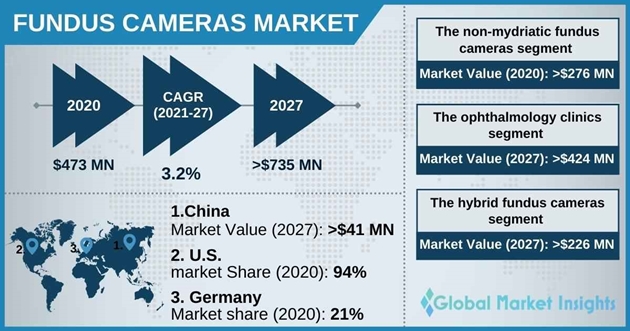 However, the high cost of fundus cameras and the lack of ophthalmologists in developing economies may negatively affect the fundus cameras market expansion. In developing countries including India, uneven distribution of ophthalmology services has been witnessed with the majority of ophthalmologists practicing in the urban areas. According to the U.S. Food Drug and Administration, fundus cameras are classified under the Class II medical devices category, and the majority of devices belonging to Class II require premarket notification (510k) approval for marketing the product. The device manufacturer is also mandated to provide appropriate labelling that describes the intended patient population, image acquisition factors, and guidance for patients regarding screening results.

The COVID-19 outbreak arose as an unprecedented health concern drastically impacting the global economy and several industries including the healthcare industry. The pandemic has significantly increased the disease burden and inflicted enormous financial adversities on healthcare services, including ophthalmology practice. The revised standard operating protocols updated by the regulatory authorities, incorporating social distancing norms have hindered the daily operations of the ophthalmologists. According to the Indian Journal of Ophthalmology, the ophthalmology clinics have been drastically affected, with a majority of the clinics suspending or cancelling the routine care & surgery services and only catering to the emergency requirements. The Indian government advised ophthalmology practices to postpone the routine outpatient examination for minimum of 4 weeks or until further instructions. The hampered ophthalmology practices limited the adoption of fundus cameras, thereby restricting the industry growth.

The ophthalmologists are at high risk of infection as close contact, droplets, and aerosols during face-to-face clinical examination might facilitate the spread of the SARS-CoV-2 virus. As a result, the American Academy of Ophthalmology (AAO), the Centers for Disease Control and Prevention (CDC), the Israeli Ophthalmological Society (IOS), and the American Society of Retina Specialists published clinical recommendations and guidelines for ophthalmology practices. The acceptance of these guidelines and fear among patients along with other factors limited the ophthalmology practice during the COVID-19 pandemic.

Technological developments in retinal imaging technology including fundus cameras will drive the industry expansion during the forecast timeframe. The emergence of a miniature table-top retinal camera system has promoted portability and offered highly sophisticated images as compared to the conventional fundus cameras. For instance, the development of 3nethra, a highly portable table-top fundus camera developed by Forus Inc. The 3nethra features an automated refractometer, low-power LED lights for imaging anterior as well as posterior segments, and a digital telemedicine feature that can transmit images to smartphones. Moreover, the incorporation of digital technology in fundus cameras led to the availability of an affordable alternative to conventional and expensive ophthalmic imaging systems.

The development of the CR-2 non-mydriatic digital retinal camera by Canon offers advanced features such as autofundus, autofocus & autocapture modes along with a digital processor. Similarly, EasyScan, a retinal imaging system offered by iOptics incorporates the scanning laser ophthalmoscopy technique and provides high resolution and image clarity. Integration of automated technology such as iris detection, auto capture, autofocus, and auto-exposure features, shows the ability to work in absence of an external power source along with other features incorporated in these cameras.

The latest technological advancement in retinal imaging system represents the smartphone-based accessories and advanced lens adaptors that upgrades the smartphone into a fundus camera. Some models use apps developed for imaging the abnormalities on the basis of artificial intelligence (AI) driven algorithms. For instance, the Welch Allyn iExaminer transforms the PanOptic ophthalmoscope into a mobile digital imaging system and aids in capturing high-resolution images. The D-eye System utilizes an add-on adaptor with an inbuilt lens attachment to the smartphone and is able to capture high-resolution, wide-angle images. These advents in fundus imaging are slated to offer affordable screening systems, for use in remote areas to reduce preventable visual morbidity by enabling easy and timely fundus screening.

The non-mydriatic fundus cameras market was valued at USD 276 million in 2020 led by the increasing adoption of non-mydriatic fundus imaging systems that are painless in nature and allow imaging of the retina and optic nerve with no dilation. For the patients suffering from glaucoma and those highly sensitive to light, the non-mydriatic fundus cameras are widely used. Non-mydriatic retinal cameras use infrared video systems that provide a high-resolution and better quality of images even in a low-light environment. These cameras use automated features such as auto capture, autofocus, and autoexposure, further reducing the need for frequent manual intervention. Non-mydriatic cameras are highly preferred in imaging pediatric patients, telemedicine screening programs and some cameras also find application in autofluorescence imaging. 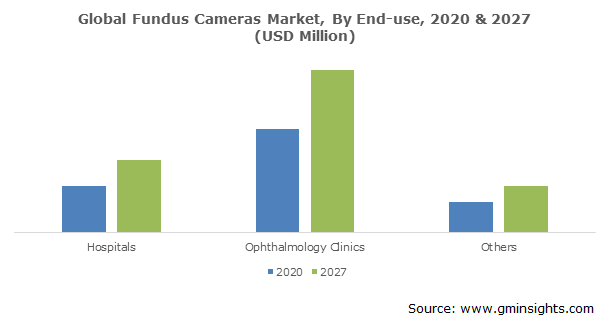 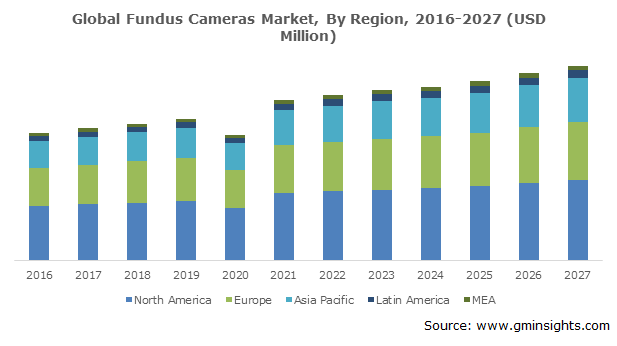 U.S. dominated the North America fundus cameras market with around 94% of revenue share in 2020 and is poised to cross USD 281 million by 2027 on account of the high acceptance of technically advanced devices, favorable reimbursement scenarios and high healthcare expenditure across the country. Favorable demographic trends such as increasing prevalence of chronic eye-related diseases, rising geriatric population will surge demand for fundus cameras for diagnosis of ophthalmic diseases. The strong presence of industry players in the U.S. and the focus of companies on strategies such as new product launches, mergers, and acquisitions will favor the industry value. Additionally, favorable reimbursement policies offered under the Centers for Medicare and Medicaid Services’ Medicare Physician Fee Schedule provides access to affordable ophthalmology services in the country.

In Europe, Germany region held 21% of the market share in 2020 and will surpass USD 44 million by 2027 due to the increasing prevalence of chronic diseases such as age-related macular degeneration (AMD), glaucoma, dry eye disease, diabetic retinopathy among others. The high prevalence of eye disorders and highly susceptible geriatric population are projected to fuel the demand for fundus cameras, thereby fostering the regional expansion.

Strategies adopted by prominent players will spur the industry demand

Fundus cameras market research report includes an in-depth coverage of the industry with estimates & forecast in terms of revenue in USD from 2016 to 2027, for the following segments:

The market size of fundus cameras surpassed USD 473 million in 2020 and will expand at a CAGR of 3.2% from 2021 to 2027.
The non-mydriatic fundus cameras accounted for USD 276 million in 2020 and will grow due to the surging adoption of painless non-mydriatic fundus imaging systems.
The ophthalmology clinics segment will exceed USD 424 million by 2027 owing to the high preference of these clinics for primary eye care.
The U.S. held 94% of the North America fundus cameras market value in 2020 and will depict lucrative growth led by favorable reimbursement scenarios and high healthcare expenditure in the country.
Customize this Report
Inquiry Before Buying