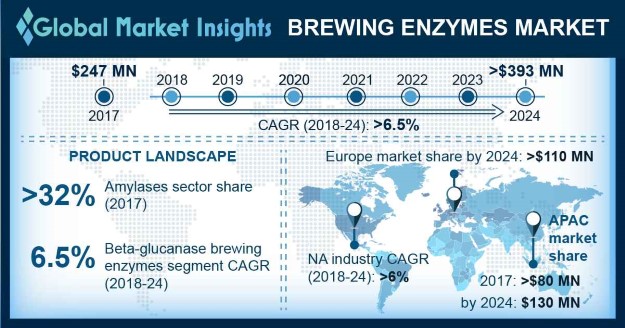 Necessity to optimize production to meet the rising beer demand is propel the brewing enzymes market growth. Requirement improved beer quality & better flavour will augment the product demand. Focus of beer producers on improving the economic feasibility owing to rising count of breweries globally will supplement the industry growth. Strategic R&D spending on by enzyme manufacturers on product development focussing on improving the product efficiency will boost the business revenue during the forecast timeframe from 2018 to 2024. Additionally, improved beer stability is strongly supporting the volume sales.

According to industry sources, the global beer production was 190.91 billion liters in 2017. China is the major beer producer contributing approximately 21% of the total beer production. Growing count of active breweries is surging the business development. For instance, as per industry reports, the number of active breweries in European Union have grown from 5,086 in 2012 to 8,490 in 2016. Growing demand for craft beer supported by rising number of craft breweries is fuelling the brewing enzymes industry growth. For instance, according to the Brewers Association, the count of craft breweries in Europe have grown substantially from 2,420 in 2012 to 6,266 in 2017.

Rising count of microbreweries and necessity to compete with large manufacturers through cost reduction is surging the brewing enzymes business revenue. For instance, microbreweries in UK grew from 778 in 2010 to 2,198 in 2016. Extensive product launches in alcohol-free and low-alcohol segment owing to trend towards healthy lifestyle is fuelling the market expansion. MEA and Europe witness higher demand for the non-alcoholic beer. Europe accounts for over 30% of the non-alcoholic beer market share. Need to improve the cost efficiency and taste consistency of beer is expanding the brewing enzymes business development.

Amylases accounted at over 32% of the global brewing enzymes market share in 2017. Wide-ranging functional benefits along with strong outlook in several brewery processes including fermentation, mashing, and cereal cooking is positively influencing the amylases business growth. Stable & uniform mashing coupled with improved filtration are among the key factors driving the product demand. Higher production of fermentable glucose in beer production particularly in light beer is fuelling the industry development. Necessity to expand the beer production capacity with utilization of existing manufacturing facilities is driving the market revenue. The optimal temperature of amylase is higher than other products.

Beta-glucanase brewing enzymes is estimated to witness growth at around 6.5% up to 2024. Enhanced wort separation by hydrolysing glucans, improved filtration and reduced viscosity are among the primary factors driving the industry demand globally. The optimal temperature for beta-glucanase is among the lowest at around 45 deg. C.

North America brewing enzymes market will witness growth at over 6.0% from 2018 to 2024. Rising competitiveness in beer industry along with need for improving the economic viability is driving the business growth in the region. For instance, as per Brewers Association, the total U.S. brewery count grew at around 16% in 2017 as compared to the previous year, with around 620 new microbreweries in 2017. Increased beer production in the U.S., owing to presence of key industry players will propel the regional market share. The U.S. beer production was over 220 million hectolitres in 2016. Rising demand for alcoholic beverages particularly from bars & pubs will support the industry growth.

Asia Pacific dominates the brewing enzymes market projected at around USD 130 million in 2024. China, Japan, Vietnam, Thailand, and India are the major beer producing countries in the region. Increasing beer manufacturing plants owing to favourable socio-economic conditions will fuel the industry demand. Urbanization along with growing consumer spending on food & beverages has enhanced the product penetration. Rising demand for low alcohol beer particularly in China and Japan is stimulating the market growth.