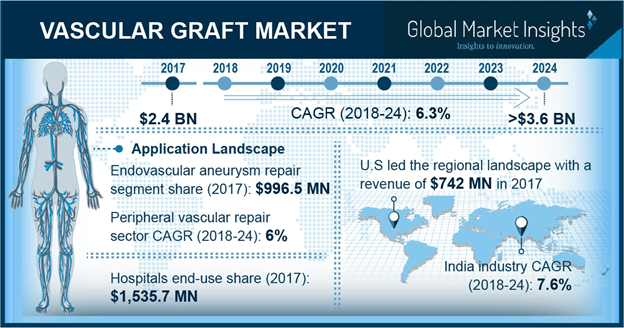 Rising pervasiveness of cardiovascular diseases and aortic aneurysms coupled with chronic kidney disease will boost market growth during the foreseeable future. Rising incidence of cardiac disorders is attributable to adoption of sedentary lifestyle along with unhealthy diet and alcohol abuse. High number of cardiovascular diseases will spur market growth in the upcoming years.

Increasing geriatric population pool coupled with rising number of chronic limbic ischemia cases will potentially spur the market growth. According to United Nations (UN) statistics, in 2017, there were an estimated 962 million people aged above 60 years across the globe, accounting for about 13% of the total world population. The major factors for such demographic shifts are increasing life expectancy and decline in fertility rate. Such factors will lead to increasing demand for vascular grafts in healthcare facilities, thus propelling vascular graft market growth.

However, low reimbursement rate and high cost of cardiovascular surgeries in developing economies can hinder the market growth. Complications associated with vascular grafts such as graft rejection and infection will restrict market growth in the upcoming years.

Polyester graft segment dominated in 2017, with segmental revenue of USD 1,457.3 million. Polyester graft has wide array of indications such as abdominal and thoracic aortic aneurysms, peripheral artery disorder, and haemodialysis access. Recent advancements in polyester graft have enabled its rapid adoption; for instance, combination of polyester grafts with collagen for development of biosynthetic grafts. This provides better tensile strength and reduces chances of graft rejection. Moreover, high demand of polyester grafts, due to its associated advantages such as longer lifespan and blood compatibility will augment segmental growth.

Expanded polytetrafluoroethylene (EPTFE) graft segment will grow at a momentous rate of 6.3% during the forecast timeframe. Fast growth rate is attributable to its huge applicability and associated biocompatibility. EPTFE graft is broadly used in haemodialysis access, peripheral vascular surgery and extra-anatomical procedures. Technological advancements in the conventional EPTFE graft will lead to its escalated demand in the future. For instance, end-point covalent attachment of EPTFE with heparin provides high thrombogenic resistance and reduced platelet attachment. Such advancements will favour segmental growth in upcoming years.

Indian vascular graft market is forecasted to grow at a rapid rate of 7.6%, owing to rising number of cardiovascular surgeries due to escalating incidence rate of chronic diseases. Additionally, increasing incidence of end-stage renal disease will lead to higher number of hemodialysis procedures performed, thereby increasing demand for vascular access. Improvement in healthcare policies and growing awareness among Indian population will drive industry growth in India during the projected timeframe.

Employment of synthetic vascular grafts for cardiovascular surgeries dates back to the late 1950s and have progressed from basic vascular grafts to sophisticated stents. Dacron and EPTFE are the most widely used materials for large diameter vascular grafts. With introduction of significant technological advancements, several improvements have been sought by researchers and medical device companies. Already new research studies are being conducted to prepare cell free and tissue-engineered vascular grafts. Vascular graft industry is expected to grow rapidly in the future and witness high success due to increasing life expectancy of people, growing burden of chronic diseases and innovative product launches. These factors will offer wide range of scope and opportunities for the rapid growth of industry.