Telemedicine carts are systems that integrate a display, camera, microphones, speakers and network access to enable remote consultation between a caregiver and a patient. A telemedicine cart may feature flexible handles, pneumatic height adjustment, antimicrobial work surfaces for easy handling of the equipment. Telemedicine carts are often equipped with specialized cameras and sensors. The cameras are used to obtain specialized images of the ear infection or skin infection for virtual patient diagnosis. The sensors are used for data collection such as pulse rate or oxygen saturation. 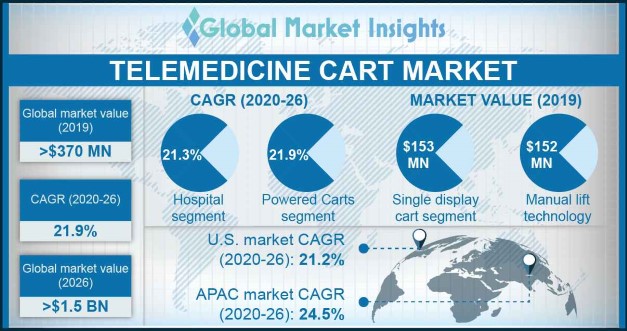 Telemedicine is an emerging concept in the medical technology landscape. The industry first saw its emergence during the American civil war, when commanders started using telegraphs to request supplies and medical assistance at the frontline. At the end of the 20th century, some hospitals started investigating the use of telecommunications to treat remote patients. This was the first use of modern telemedicine. In 1959, University of Nebraska doctors relayed a neurological examination to students across the campus by the means of a two-way TV system. As technology advanced, market players launched the modern telemedicine cart with dedicated displays, cameras, and integrated sensors. These carts can be used for remote consultation sessions, administer emergency care during disasters, or to include a remote physician in the consulting room. Market players are currently working on addition of new technology to the carts, increasing the affordability to increase product adoption and expand the telemedicine carts market share.

Rising prevalence of infectious diseases, especially in the remote parts of the world will help in expansion of the market. For instance, in August 2018, Congo witnessed a massive Ebola outbreak that required immediate assistance of healthcare personnel. As telemedicine services are helpful particularly in rural areas where specialists may not be readily available, the demand for telemedicine carts witnessed a significant growth. Major factors leading to rise in infectious diseases include a rise in zoonotic diseases and a lack of vaccines for such diseases. Thus, growing prevalence of infectious diseases will lead to an increase in adoption of telemedicine carts across the forecast timeframe.

High cost of telemedicine carts might be a growth dampening factor for telemedicine cart market expansion. Moreover, dearth of specific regulatory bodies governing telemedicine services will present as a major hurdle to the industry growth. 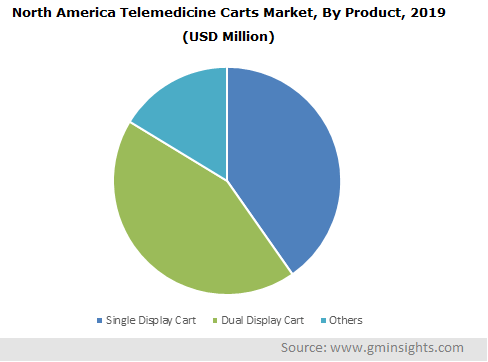 By operation, the telemedicine cart market size is segmented as powered and non-powered. Based on the battery technology, powered telemedicine carts are further segmented as LiFe (lithium iron phosphate) and SLA (sealed lead acid) battery powered. The powered carts market will witness a 21.9% CAGR. This significant expansion can be attributed to the independent power source in the telemedicine carts, enabling them to be used from remote locations where power is often unreliable. Furthermore, as large percentage of population is underserved in remote areas of the globe, the adoption of telemedicine services will boost market demand.

By lift technology, telemedicine carts are split into electronically powered and manual lift technology. The electronically powered carts market held a 60% market share in 2019, making it the segment of choice. It is forecasted that the segment will see significant growth during the coming years. Telemedicine carts with electronic lift technology use motors to adjust the height of the cart automatically. Furthermore, they have a memory function which remembers the height setting and increases the ease of use of these carts. These factors will increase the product demand, fueling industry growth over the forecast period.

Increase in specialty centers will power the segment growth

Based on the end use, telemedicine cart market is segmented into hospitals, clinics, specialty centres, home care, and others. The specialty centre segment was valued at USD 74 million in 2019 and is poised to witness significant growth. Specialty care centres include services such as cardiology, anaesthesia and emergency care. These specialty centres are increasing in remote areas and owing to a lack of trained medical personnel in these parts, telemedicine will be the preferred alternative. These factors will boost the market demand across the analysis timeframe. 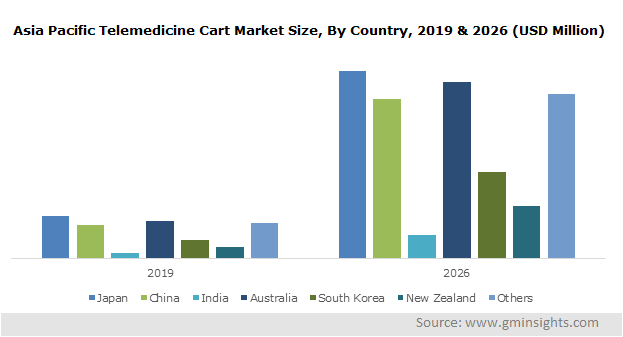 The Asia Pacific held a significant market share in 2019 and is forecasted to exhibit a 24.5% CAGR. The region accounts for a large percentage of the global population, most of which resides in rural areas. Increasing sophistication of telecommunication services, coupled with increasing penetration of internet will prove conducive to the industry growth. Furthermore, government initiatives promoting development of telemedicine will increase adoption of telemedicine solutions. These factors will boost the APAC telemedicine cart market share.

North America was valued upwards of USD 220 million in 2019 and the market is expected to witness significant growth in the future. Increasing healthcare expenditure will increase the demand for price-sensitive alternatives. An increasing number of insurers reimbursing telemedicine will drive technology adoption. Furthermore, a growing inclination of the consumers towards homecare and a presence of key players in the region will contribute to the regional industry growth.

Novel product approvals in Europe and the U.S. will drive market growth

Major companies in the telemedicine cart market share include American Well, AMD Global Technologies, Ergotron, Parsys, and Poly. These players are launching innovative products, partnering with caregivers in a bid to increase market share. Furthermore, they are adopting inorganic strategies such as mergers and acquisitions to expand their operations in the industry.

The telemedicine cart market research report includes an in-depth coverage of the industry with estimates & forecast in terms of revenue in USD from 2015 to 2026, for the following segments:

The above information is provided for the following geographies: