Digital Therapeutics Market size is projected to experience significant growth from 2020 to 2026. Digital therapeutics is a field of medicine which delivers evidence-based therapeutic mediation for preventing, managing or treating a disease or disorder. Digital therapeutics includes software-based interventions or software used in conjunction with wearable devices such as fitness trackers, smart pills, non-invasive blood glucose meters and smart inhalers among others. 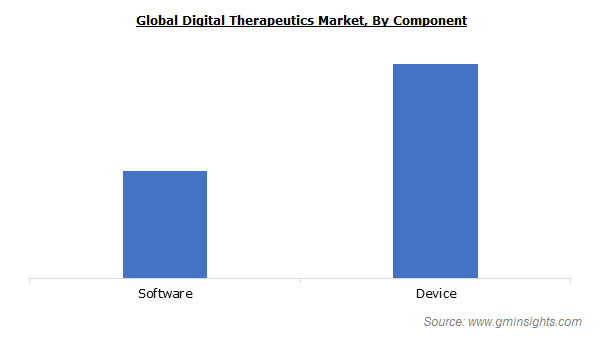 Additionally, increase in adoption of smartphones & tablets coupled with need to control healthcare costs are other factors contributing to the growth of the market. Adoption of smart phones especially in the developing economies such as India, China, Brazil, and South Africa is on a rise, which could significantly impact the growth of the market during the analysis period. For instance, the number of smart phone users in 2018 were 2.9 billion individuals, whereas in 2019 the number grew to 3.2 billion individuals. Thus, the increase in smartphone adoption, technological advancements and increased launch of novel healthcare applications will supplement the market growth during the study period.

On the basis of component, the market is segmented into software and devices. Software will witness a higher growth rate during the analysis period owing to the frequent launch of fitness as well as health apps on smart phones. For instance, in 2015, there were around 150,000 health apps available in the market, however as of 2018, the number doubled and had reached to around 318,000. Thus, the increase in the availability of app will aid in boosting the market growth.

Based on application, digital therapeutics market is segmented as diabetes, obesity, gastrointestinal disorder (GID), cardiovascular disease (CVD), respiratory disease, smoking cessation, central nervous system (CNS) disease, and others. Diabetes segment was the major revenue contributor in the market owing to the increasing diabetes cases globally. This is mostly prevalent in developing countries such as India and China which are known as the diabetes hub of the world. For instance, the total diabetes population in India is expected to reach 69.9 million by 2025 and 80 million by 2030.

On the basis of sales channel, the digital therapeutics market is segmented into business-to-business (B2B) and business-to-consumers (B2C). Business-to-consumers is predicted to hold a major share in the market due to the direct availability of apps on various platforms such as Android, Windows and Apple among others. Also, the rise in smartphone utilization will further augment the growth of the market.

North America held a major share in the digital therapeutics industry owing to the already increased awareness regarding the availability and benefits of health apps. Also, major players operating in the digital therapeutics market are based in the U.S., which will result in the increased exposure of apps to the general population. Thus, this will result in the increased usage and adoption of apps, thereby augmenting the market growth.

Asia Pacific digital therapeutics industry is estimated to garner a higher growth rate during the forecast period due to the increasing smart phone penetration, awareness and the rising trend of self-management of health via mobile applications.