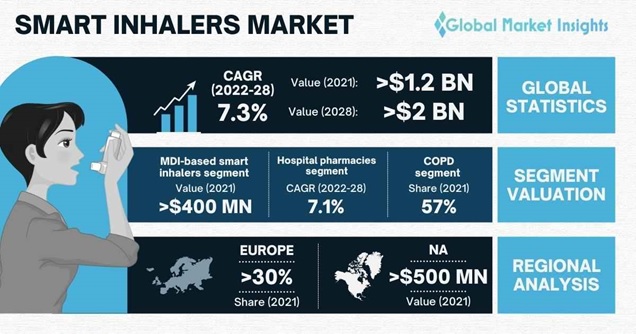 However, the dearth of awareness about the symptoms of COPD and asthma has resulted in most of the people suffering from respiratory diseases remaining undiagnosed and, thus, untreated. This is considered primary factor for hampering the smart inhalers market expansion. Most of the people suffering from symptoms of COPD are unaware of disease. Still, the use of smart inhalers is not widely supported within the public health system. This is owing to the limited availability of reimbursement and low awareness among the patients regarding novel technology. Moreover, the limited availability of the product in emerging regions creates an obstacle, that directly affect the overall industry growth as per the current scenario.

Dry Power Inhaler (DPI)- based smart inhalers segment is projected to witness more than 10.8% growth rate by 2025. The DPI based smart inhalers contain add-on sensor developed by digital companies to work with dry powder inhaler manufactured by pharma companies. Recently, Teva introduced the digital dry powder inhaler, ProAir Digihaler with built-in sensors. The smart inhaler connects with the mobile application and provides inhaler use information to people with COPD and asthma. In the past years, various pharma companies collaborated with digital companies to develop smart inhalers.

Metered Dose Inhaler (MDI)- based smart inhalers segment captured around 34% of the market share in 2018. The leading MDI manufacturers are focusing on collaborating with software and digital companies to serve the targeted population. Also, such collaborations and partnerships help manufacturers to launch their products more conveniently with enhanced distribution channel and thus fuel the growth of the smart inhalers market. 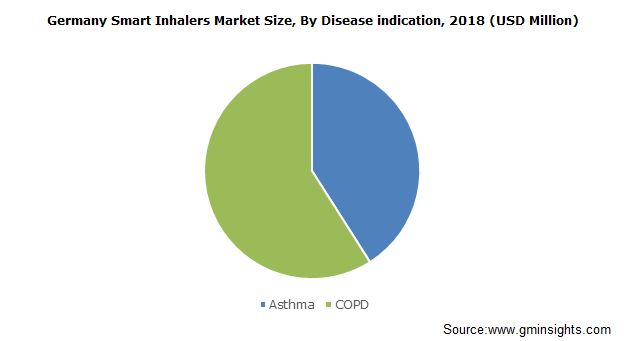 The asthma segment in the smart inhalers market accounted for USD 50 million in 2018. Asthma is considered as one of the most prevalent chronic inflammatory airway diseases. According to the Asthma and Allergy Foundation of America, more than 25 million Americans have asthma.  The growing prevalence of asthma will propel the segment growth.

The COPD segment is predicted to expand at a CAGR of 11% through 2025 led by the rising preference of COPD among the general population.

North America smart inhalers market size was USD 44 million in 2018 owing to the rising per capita income that is fostering people to spend more on health care. This factor is anticipated to positively influence the growth in treatment options for respiratory disorders. Also, technological advancements and affordability of smart inhalers among the target population are further slated to boost the North America market progression.

Asia Pacific smart inhalers market is poised to register growth of over 12.5% by 2025 on account of the rising healthcare expenditure and an increasing number of product development. India and China, along with other developing countries, are considered as the preferable destinations for investments and expenditure. The prime driving factors in the region are infrastructural developments, rapid industrialization, and economic growth. The growth in this region is paving way for considerable growth opportunities for smart inhaler manufacturers.

Some of the notable companies operating in smart inhalers market include AstraZeneca plc, GlaxoSmithKline, Aptar Pharma, Novartis, Boehringer Ingelheim, Teva Pharmaceuticals,  H&T Presspart Manufacturing Ltd., Findair Sp. z o. o., Vectura Group, and  Zeolr Technologies Pvt Ltd. Collaborations, partnerships, and agreements between digital and pharma companies play an important role in the market’s supply chain. The growing adoption of digitally improved inhalers across various end-use is enhancing the growth and innovation in the digital healthcare industry. The smart inhaler technology is becoming one of the most important areas of collaboration between digital health and pharma companies.

The development of the first commercial pressurized metered-dose inhalers (pMDIs) was marketed in 1956 as the first portable multidose delivery system. Since then, the pMDI has become the most commonly prescribed inhalation device to treat COPD and asthma. While, asthma and COPD are the very common respiratory disease, where the total medication costs are high. In 2004, GlaxoSmithKline launched the first pMDI with a built-in dose counter, Seretide Evohaler. The connected devices for asthma and COPD are becoming increasingly accessible, particularly smart inhalers that can accurately monitor, track, and prompt medication use. The smart inhaler was initially introduced in the U.S market to treat asthma and COPD. Smart inhalers are rapidly evolving as one of the most noticeable areas of pharmaceutical engagement in digital health. The increasing number of companies are embracing the use of this digital technology in order to enhance the respiratory diseases management and improve the effectiveness of prescribed medications.

Smart inhalers market research report includes in-depth coverage of the industry with estimates & forecast in terms of revenue in USD million from 2016 to 2025, for the following segments: