Streaming Devices Market size estimated at over USD 5 billion with shipments of 60 million units in 2016 and is predicted to grow at around 22% CAGR from 2017 to 2024. 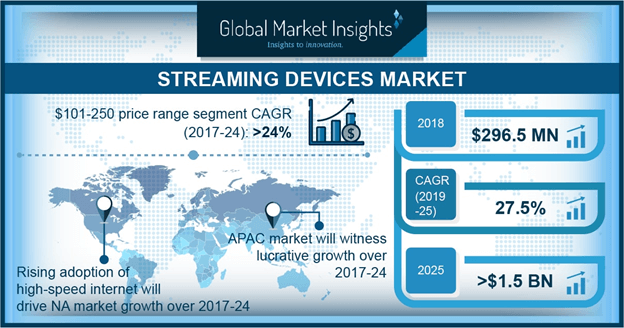 The increasing internet penetration and rising adoption of video streaming platforms, such as Netflix, Hulu, YouTube, Hotstar, and Amazon Prime, are driving the streaming devices market. These platforms are introducing movies, TV shows, and original exclusive content to keep users engaged with their services. In January 2018, Hulu revealed that its subscriber base has grown to around 25 million, showcasing a rise of 48% in the user base. With the rising adoption of these services, players offering smart TVs are focusing on providing consumers easy, fast, and affordable ways to watch these services on TV. For instance, in August 2019, Atria Convergence Technologies (ACT), an Indian telecommunications company announced the launch of 4K Android TV box compatible with Netflix streaming and supporting platforms such as Zee5, Hotstar, and Sony LIV. The increasing number of Over-The-Top (OTT) services is projected to drive industry growth. The convenience and affordability in viewing content in real-time are encouraging consumers to use these services.

The rising demand for OTT content globally is providing several opportunities to service providers, driving the market competition. For existing and new vendors to remain competitive in the market, they are improving their services constantly. To increase efficiency, Amazon, Apple, and Google are deploying advanced features in their devices. For instance, in March 2019, Roku Inc., announced that its streaming devices will support Alexa voice assistant and compatible TVs in the U.S. This has enabled users to search for content and channels without using the physical control of TVs. In January 2019, Google introduced third-generation Chromecast with advanced design and 15% fast performance compatible with a range of online video services including Netflix, SonyLIV, Voot, and Hotstar.

USD 101 – 250 price range is anticipated to witness a growth of 24% CAGR over the coming years. The devices available in this price range consist of several accessories such as remote control with batteries, infrared extender cable, far-field voice recognition, hands-free voice control, and Ethernet adapter,  which are compatible with several TV resolutions. Devices, such as Roku Ultra, are compatible with 4K and higher resolutions, offering enhanced consumer experience. Players in the streaming devices market including Google and Amazon are increasing their focus on offering devices built-in with beamforming technology for faster and more reliable wireless communication in media streaming players. For instance, in August 2019, Amazon Inc., released Fire TV Cube priced at USD 119.99 with features of Echo Dot, Fire TV Stick, and multi-directional IR emitter to allow users to have hands-free TV control. 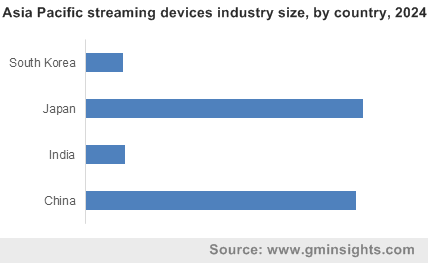 The introduction of high-speed data plans, increasing usage of digital media, and rising awareness of business productivity offer several potential growth opportunities to the Asia Pacific streaming devices market growth. Telecommunication providers are offering OTT services with their data plans, fueling the market growth in the region. Airtel, a telecommunications services company based in India is offering a free subscription to Amazon Prime and Netflix for mobile & broadband customers in the country. The rising government focus on digitization coupled with increasing penetration of LTE and 5G technology in the region will provide several growth benefits to the market. According to the Beijing Communications Administration, Beijing has plans to establish over 10,000 5G base stations by the end of 2019. Moreover, the growing focus on established OTT providers in this region is likely to open new avenues for the market players.

Key players operating in the streaming devices market include Amazon.com, Inc., Google LLC, Humax, Apple Inc., Nvidia Corporation, Xiaomi Inc., Intel Corporation, Logitech International S.A, and Roku, Inc. These companies are increasingly investing in the development of innovative technologies, such as high HD systems, to increase revenue and sustain in the market. The players are investing in several business strategies to sustain in the market. For instance, Roku, Inc. is offering a streaming stick compatible with 4K HDR, long-range wireless, and voice remote with TV power & volume features. The rising adoption of digital media is encouraging players to focus on new service development to enhance the customer experience. In July 2019, Apple Inc., announced its plan to introduce Apple TV+ streaming services to allow its users to watch content on iPhone, iPad, MAC, Apple TV, and other smart TVs. The new version also offers access to new shows being produced by the company based on a subscription service.

The companies operating in the industry are offering a limited range of products catering to specific resolution type. With the ongoing technological advancements, companies are required to include innovative features in devices to attract more customers and remain competitive in the market. Moreover, players experience government regulations regarding copyright issues and content piracy, impacting market growth. Countries in the Middle East and European regions have stringent regulations for controlling data streaming. In March 2016, the South African Film and Publication Board (FPB) announced to ban Netflix video on-demand services. Furthermore, the introduction of smart TVs offering the same functionality as streaming devices at low cost is another obstacle impacting market growth.

The market size of streaming devices estimated at over USD 5 billion in 2016.
The industry share of streaming devices is predicted to grow at around 22% CAGR from 2017 to 2024.
USD 101-250 price range streaming devices will witness growth of over 24% during the forecast period.
Key companies operating in the market include Amazon.com, Inc., Google LLC, Humax, Apple Inc., Nvidia Corporation, Xiaomi Inc., Intel Corporation, Logitech International S.A, and Roku, Inc.
Streaming device that support 1080p resolution are in high demand due to the system’s HD video quality offering at low cost and compatibility with most digital content.
Asia Pacific market is expected to observe robust revenue growth opportunities owing to availability of high-speed internet plans coupled with rising product awareness in the region.