Sodium Cumenesulfonate Market size was valued at around USD 57.5 million in 2019 and will showcase a growth rate of 4.3% from 2020 to 2026. Rising urbanization, growing laundry detergent requirements, and the proliferating demand for personal care products will boost product sales by 2026. 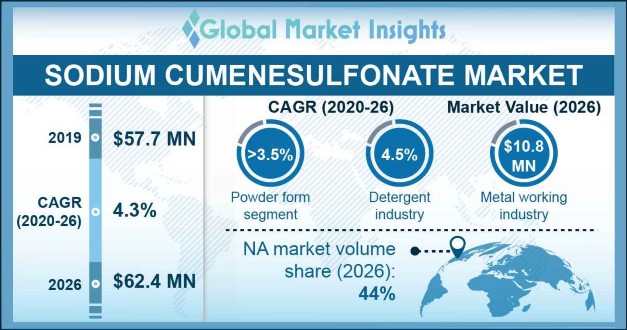 Sodium cumenesulfonate, also known as benzenesulfonic acid, (1-methylethyl)-, sodium salt, and sodium 2-isopropylbenzenesulfonate, is used in several applications owing to its viscosity-reducing properties. Furthermore, the chemical is used as a coupling agent, solubilizer, and anti-caking agents in powder detergents. Additionally, it promotes compatibility among several chemicals present in multi-component systems. The use of chemicals in a wide range of shampoos and dishwashing agents is expected to drive the sodium cumenesulfonate market.

During the forecast period, the sodium cumenesulfonate market growth will largely depend on the growing detergent and oil & gas industries. The oil & gas industry will witness a strong growth during the forecast period owing to increasing oil & gas exploration activities in North America and Europe. The metal working industry will also witness strong demand growth due to rising end-user industries, such as automobiles and construction, in Asia Pacific.

The major material used in the production of sodium 2-isopropylbenzenesulfonate includes cumene, sodium hydroxide, and sulfuric acid, among others. The prices of these raw materials will hugely fluctuate in the global market scenarios; hence, directly affecting the cost of production. Cumene is one of the major raw materials used in the production of sodium cumenesulfonate and is produced from propene and benzene (crude oil derivatives). Any fluctuation in the global crude oil prices will hugely impact the overall production cost of sodium cumenesulfonate. 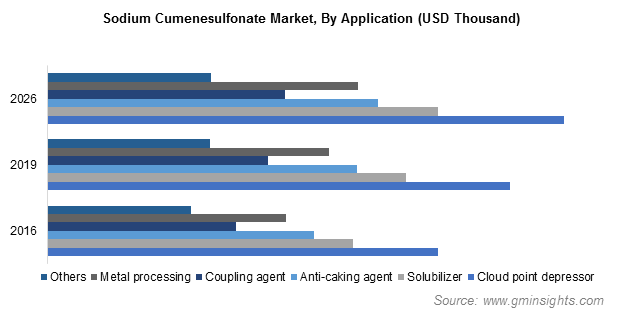 Cloud point depressor is an important property required during the usage of petroleum-based mineral oils at lower temperatures. Sodium 2-isopropylbenzenesulfonate enables detergent manufacturers and other industry users to lower down the cloud point of aqueous formulated products. The cloud point depressor application generated around USD 14.8 million revenue in 2019.

The growing liquid detergent industry in developed economies along with rising concerns for hygiene is driving product demand for cloud point depressor application. Furthermore, the proliferating chemical industry in Asia Pacific is expected to support the sodium cumenesulfonate market segment growth over the forecast timeframe.

The sodium cumenesulfonate market from metal working industry is expected to generate around USD 10.8 million revenue by 2026. Metal worked parts and fabricated products are used in various sectors such as automotive, oil & gas, consumer products, agriculture, aerospace & defense, marine, and medical industries. Growth in the automotive and aerospace sectors will drive the metal processing industry, which, in turn, will propel product demand in the metal working industry. 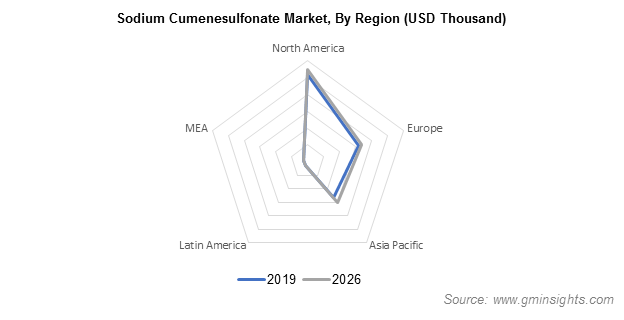 Sodium cumenesulfonate market report includes in-depth coverage of the industry with estimates & forecast in terms of volume in tons & revenue in USD thousand from 2016 to 2026 for the following segments:

Global market for sodium cumenesulfonate will expand at nearly 4.3% CAGR through 2026, with high demand for hydrotrope organic compound in laundry detergent and personal care formulations.
The liquid form sodium cumenesulfonate will account for close to 70% of the industry share in terms of volume by 2026, as it sees extensive use in household cleaning products and detergents.
The industry revenues from cloud point depressor application was pegged at USD 14.8 million in 2019 due to its requirement in using petroleum-based mineral oils at lower temperatures.
North America region is estimated to account for 44% volumetric share of sodium cumenesulfonate by 2026 owing to consistent expansion of oil & gas sector and robust demand for detergents.
Customize this Report
Inquiry Before Buying