Global metalworking fluids market revenue in 2019 was USD 11.6 billion and will grow with a CAGR over 4.8% during the forecast period driven by the augmenting demand for designing applications and metal processing in general manufacturing and automobiles industries. Indispensable use of these fluids across automotive and metal fabrication industries will complement business growth by 2026.

Increasing product demand in the industries such as automation, metal fabrication, steel and original equipment manufacturers (OEM) is analysed to be a major factor propelling the global metalworking fluids market share by 2026. The product is majorly used for metal removal, protection, forming metal treating applications in these industries. 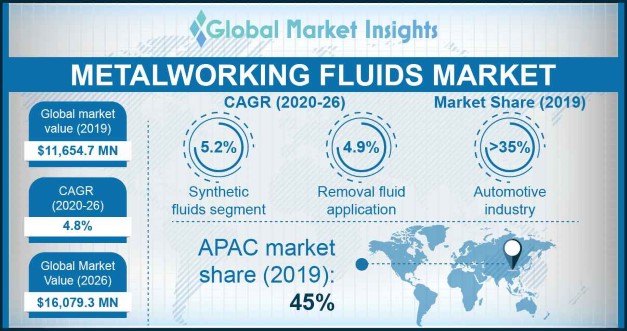 Volatility in the crude oil prices owing to geopolitical scenario in the Middle East may hamper its demand at some extent over the forecast period. Furthermore, strict government dumping regulations of metalworking fluids shall act as a major downside to the market. However, many manufacturers are seen to innovate new dumping and treatment processes to comply with the ongoing regulations, which shall create new growth avenues in the future.

Synthetic fluids will observe maximum gains of 5.2% CAGR between 2020 and 2026 on account of its superior and consistent performance. Neat oils will showcase potential growth prospects over the projected timeframe owing to their multiple benefits including rust prevention, metal finishing, higher evaporation capability and lubricity.

They assist in chip formation and prevent overheating resulting in extending the service life of machine tools. Growing requirements for lowering the operational costs and increasing the efficiency & life of machinery will positively contribute towards escalating the metalworking fluids market revenue over the projected timeframe.

Removal fluids accounted for more than 50% of the overall volume in 2019 and is expected to grow with a highest CAGR of 4.9% during the forecast timespan. These fluids offer a wide range of performance capabilities for meeting industrial requirements in grinding and machining operations.

Automotive industry had the largest share in 2019 and accounted for over 35% of the overall volume. Increasing disposable income and living standards in countries such as India, Indonesia, among others will further fuel the automotive demand over the forecast period. For instance, according to the OICA, China automotive production in 2015 was 24.5 million units and reached to 27.8 million units in 2018. 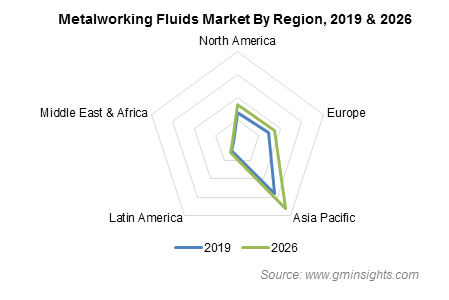 Asia Pacific led the market in 2019 and accounted for 45% of the overall industry volume. Increasing automotive customer base in China and India along with robust industrialization in the region will substantially boost the product demand in the coming years.

Expansion of manufacturing facilities and production capacities is prominently increasing the product penetration. For instance, in August 2018, Volkswagen Group opened its new FAW-Volkswagen plant in China with production capacity of 1,200 vehicle units per day. In addition, rising government support in India and China to strengthen their manufacturing industries will further complement the metalworking fluids market growth in the near future.

The major players involved in metalworking fluids industry held more than 50% of the total industry share. The ecosystem has presence of some multi-national giants such as FUCHS, Castrol, Quacker, Chem Arrow Corporation, ExxonMobil, The Lubrizol Corporation and Total S.A.

Every company has a wide product portfolio which includes metalworking fluids with specifications for almost every application. Furthermore, industry players are adopting various organic and inorganic growth strategies to attain a larger share in the overall market. For instance, Exxon Mobil in 2017 expanded its hydrocarbon fluids capacity by 250,000 tons per year.

The players can also be seen adopting inorganic strategies such as mergers, acquisitions and partnerships to attain strategic dominance over their competitors. For instance, in August 2018, Yushiro Chemical Industries, a manufacturer of metalworking chemicals in Asia Pacific region announced strategic partnership with North America based Qualichem. This partnership agreement is in accordance with their strategy to share technology and material expertise.

Metalworking fluids market report includes in-depth coverage of the industry, with estimates & forecast in terms of revenue in Kilo Tons and USD million from 2015 to 2026, for the following segments:

Metalworking fluids market will observe a CAGR of 4.8% over 2020-2026 with rising demand for designing applications and metal processing in general manufacturing and automobiles industries.
Synthetic fluids segment will witness a CAGR of 5.2% through 2026 on account of growing product demand owing to its superior and consistent performance.
Removal fluids segment had captured over 50% share in 2019 and will record a CAGR of 4.9% through 2026 due to increasing product adoption in industries for grinding and machining operations.
Automotive segment had captured over 35% share in 2019 on account of rising disposable income and improving living standards in countries like India, Indonesia, etc.
Asia Pacific market accounted for 45% share in 2019 owing to increasing automotive customer base in China and India along with robust industrialization in the region.
Customize this Report
Inquiry Before Buying