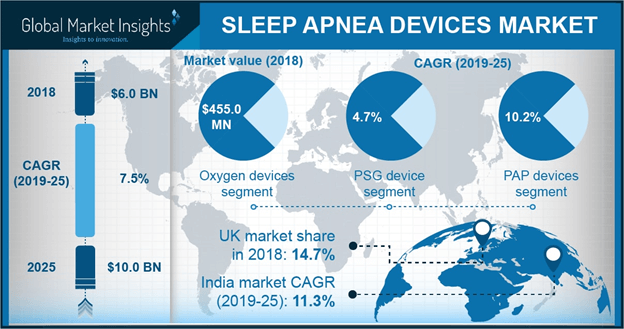 Sleep apnea is an acute sleep disorder, in which person's breathing is interrupted during sleep. Untreated sleep apnea can cause chronic disorders such as cardiovascular diseases, high blood pressure, obesity and neurological conditions. Hence, increasing prevalence of sleep disorders across the globe will significantly drive sleep apnea devices industry growth over the projected timeframe. For instance, according to the National Healthy Sleep Awareness Project, in 2014, nearly 25 million adults in the U.S. were affected by sleep apnea and other sleeping disorders. The aforementioned factors will augment the global market growth.

However, high cost associated with diagnostic and therapeutic devices might restrict sleep apnea devices industry growth in the coming years. Also, stringent regulatory scenario for the approval of these devices will also serve as a major market growth limiting factor. 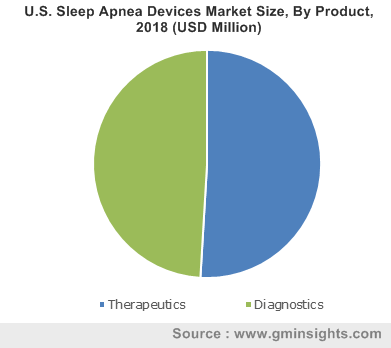 Polysomnography (PSG) device is used for the diagnosis of sleep disorders. PSG device market held major revenue size of USD 770.1 million in 2018. Increasing prevalence of sleep apnea and related co-morbidities in various parts of the world is a major factor boosting the demand for polysomnography devices. Moreover, rising awareness regarding sleep apnea and other sleep disorders among the population will further propel market growth. 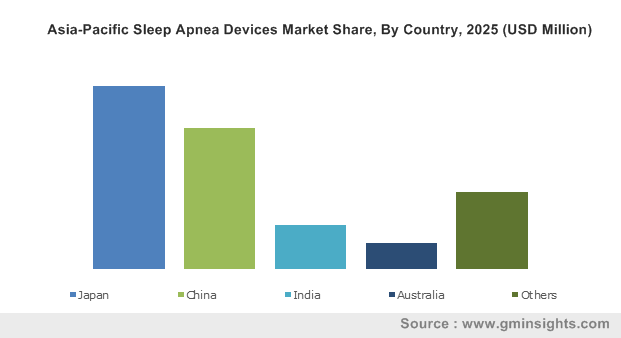 UK market held significant revenue share of about 14.7% in 2018, owing to increasing number of companies manufacturing sleep apnea devices in the country. Growing elderly population base prone to suffer from sleeping disorders is another chief reason escalating the business growth. Also, rising demand among the population for sleep apnea diagnosis and therapeutic devices will further augment UK market growth in the forthcoming years.

Indian market is estimated to witness lucrative growth of 11.3% CAGR across the forecast timeframe, due to increasing prevalence of sleep apnea and other sleep disorders. Rising disposable income in emerging countries such as India and China will further impact the business growth. Additionally, increasing rate of obesity owing to high adoption rate of sedentary lifestyle is another major factor influencing the prevalence of sleeping disorders, thus boosting product demand.

Sleep apnea was discovered in the year 1965. It occurs when the upper airway becomes blocked repeatedly during sleep. Previously, the only effective therapy for obstructive sleep apnea was tracheostomy, that bypasses the upper airway obstruction. Launch of continuous positive airway pressure (CPAP) therapy in 1981, was a major discovery in the treatment of sleep apnea. Increasing technological developments in the sleep apnea diagnostic and therapeutic devices will further augment industry growth. Latest treatments for OSA includes Hypoglossal nerve stimulation, Expiratory Positive Airway Pressure (EPAP) among few others. Additionally, the industry is highly competitive due to the presence of established players such as Becton Dickinson, GE Healthcare, Invacare Corporation and Philips Respironics among few others. Growing investment in R&D activities to launch novel products is the major focus of companies, thus offering robust market growth opportunities in the foreseeable future.