Sandblasting Media Market size was valued at around USD 9.0 billion in 2020 and is estimated to grow at a CAGR of 7.4% from 2021 to 2027 owing to the demand for robotic sandblasting due to the rising need for solid waste management. Additionally, the surging demand from the construction and metalworking industries is likely to offer new growth opportunities for industry growth. In terms of volume, the market share is anticipated to grow at 6% CAGR while recording 30,175.2 Kilo Tons through the forecast period. 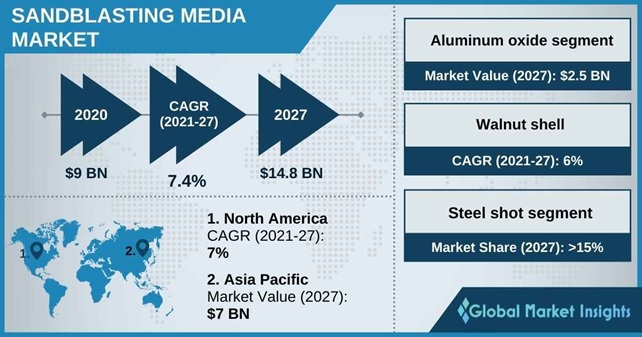 Extensive applications of sandblasting for surface texturing of concrete and rust removal on surfaces to enhance durability and appearance will spur the sandblasting media market share. To meet the high competition and survive market shocks, manufacturers and various producers have started to adopt automation technologies. This is done to increase production capacities, reduce manufacturing lead times, increase efficiency, and decrease waste generation.

The aluminum oxide segment will generate a revenue of around USD 2.5 billion in sandblasting media market by 2027. It is preferred in specialized applications, in which a surface finish is required that justifies the extra cost. Aluminum oxide hardness generally ranges from 8 – 9 Mohs with a high etch surface profile. The product is recyclable, sharp angular, and a long-lasting media used in various applications. Aluminum oxide is characterized by its superior hardness and strength. It can be used in applications, ranging from anti-slip surfaces, industrial applications as a blasting media, and as a raw material in refractories. 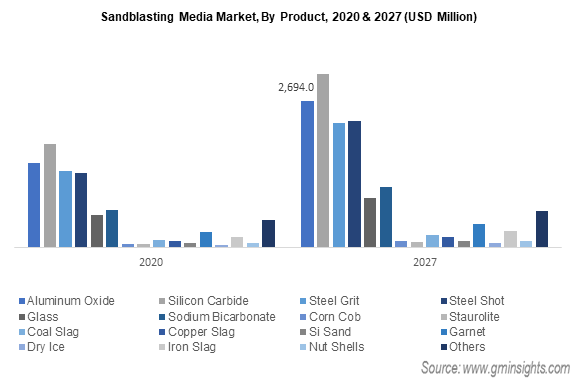 The walnut shell segment will witness around 6% CAGR in the sandblasting media market from 2021 to 2027. These are hard and fibrous abrasive derived from crushed walnut shells made in line with the International Trade Standard. Walnut shell is soft abrasive type having usage in industrial application. These abrasives share excellent durability and is commonly used to polish and blast clean glass, soft metals, wood, fiberglass, stone, and plastic. Walnut shell works as a de-burring and de-flashing product for casting, molding, and electrical parts. 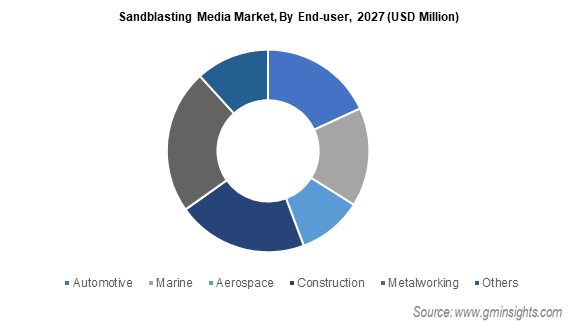 The metalworking segment will generate a demand of around 6.5 million tons by 2027. The metalworking industry will witness significant growth driven by rising application in the steel, aluminum, copper, zinc, and other metal products market. The segment will also dominate the end-user segment throughout the forecast spell. Abrasive blasting is a quick and efficient solution to get metal parts functioning properly and looking their optimum best. Sandblasting was earlier used in the past with sand as major media. However, continuous upgradation in metal fabrication industry continued to improve the other types of grits that are being utilized. 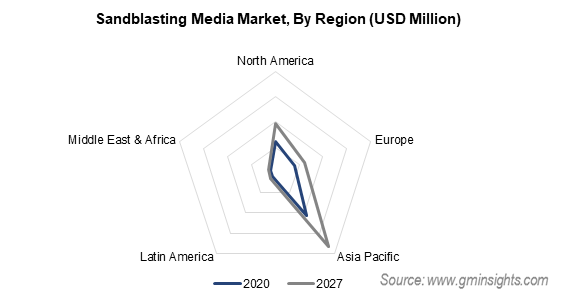 Asia Pacific is expected to generate around USD 7 billion by 2027. China holds a major share in the market owing to the high usage of sandblasting media in different end-user industries. Furthermore, India is expected to be the fastest-growing country in the region due to high metalworking activities in the country and is also one of the major end-user consumers.

Increasing construction activities and initiatives taken by various governments in the Asia Pacific will positively impact on the sandblasting media market during the forecast timeframe. Sandblasting is frequently considered as a feasible operation for surface preparation or cleaning of metal parts in this region in almost all countries such as Thailand, Indonesia, Malaysia, and others. Therefore, the region holds a major share in sandblasting media industry and is expected to grow at a significant rate during the forecast timeframe.

Several small, medium, and international players are operating in the global sandblasting media market. Companies are majorly involved in strategic partnerships and mergers & acquisitions to offer competitive benefits along with strengthening their product portfolios.

The sandblasting media market report includes in-depth coverage of the industry with estimates & forecast in terms of volume in kilo tons and revenue in USD million from 2021 to 2027 for the following segments:

Sandblasting media market share surpassed USD 9 billion in 2020 and is anticipated to expand at a CAGR of 7.4% between 2021 and 2027 with escalating demand from the metalworking and construction sectors.
The market revenue from walnut shell blasting is set to grow at a CAGR of 6% through 2027 owing to the rising product usage across a range of applications comprising the cleaning of aircraft engines, automotive parts, graffiti removal, turbines, and architectural restoration & cleaning.
The market share from metalworking application is expected to record a demand of around 6.5 million tons up to 2027 impelled by growing application in the aluminum, zinc, steel, copper, and other metal products industry.
Asia Pacific sandblasting media industry will cross a valuation of USD 7 billion by 2027 driven by the high product deployment across different end-user industries in China.
Customize this Report
Inquiry Before Buying