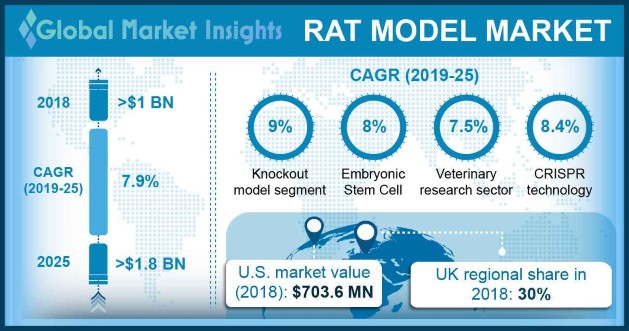 Rat model is defined as the use of animal model for research in biomedical science and psycology. Rats and humans have various similarities such as physiology, similar body organs, similar genetic structure to the humans and often suffer from the same diseases. Hence, it is used by scientists and researchers to study and find cure for diseases, create new products and test the end products before being used on humans. The essential factor for using animal models in research is to model human physiology and function as well as to advance the understanding of human diseases. Thus, such models have been instrumental in achieving this goal and is expected to continue to play an important role.

The concept of lab rat established over 150 years ago when rats were the major animal model for the understanding of human diseases. Rats were the first mammalian species to be cultivated for use in the laboratory. Consequently, most in vivo assays were initially developed and improved in the rat. In 2017, newly developed genetic rat models were created to study Phelan-McDermid syndrome. The syndrome demonstrates severe language delay, high rates of autism, attention deficits and, intellectual disability. These models are considered as one of the best models because of its social ability and enhanced cognitive compared to mice. Furthermore, they are frequently used in the immunology research since it imitates autoimmune diseases such as diabetes mellitus and multiple sclerosis. However, rising concern for the welfare of animals and growing awareness pertaining to animal rights will impede the market growth.

Growing demand for rat model market in biomedical research for understanding the current health issues is boosting the market growth. Rat models have resolved disease pathologies of numerous diseases due to which there is a rise in the adoption of these models in biomedical research. These models have currently dominated the research in cardiovascular diseases, and this is because rats have been a key physiological model for cardiovascular research. Other factors that have fostered the adoption of rat models are its easy handling and low cost. Hence, the aforementioned factors are propelling the market growth.

Based on rat type, the market is segmented as inbred, outbred, knockout, hybrid and others. Inbred market held the majority of market share in the year 2018 and was valued at around USD 275.9 million. The high revenue share is attributed to growing usage of inbred rat models to study various complex disorders such as cardiovascular disorders, cancer research and neurodegenerative disorders. Furthermore, inbred models are shown to be more advanced in terms of cognition and memory. Rats are capable of learning a wider variety of tasks owing to which many studies on memory and learning are performed in rats. Thus, all these factors are contributing in the segmental growth and thereby fuelling the market growth positively. 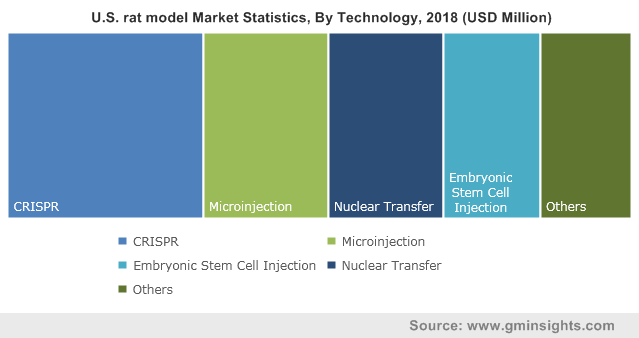 Growing application of rat models in research and development will augment the demand and adoption, thereby propelling the market growth

Based on application, the market is segmented into research and development, production and quality control, academics and others. Research and development segment accounted for around USD 780.4 million in 2018. The use of rat models in research and development activity is rising with each passing year. This is because rat is an excellent model for cardiovascular diseases such as hypertension and stroke. Such models that are used for research on breast cancer are better than mice models. Also, they are hormone receptive with histopathology and have premalignant stages that more closely resemble the human disease. Furthermore, rat is the primary model for mechanistic studies of human reproduction. Thus, all the aforementioned factors will positively contribute to segmental growth over foreseeable future.

Based on use, the market is segmented as human and veterinary. The use of animal testing for human research is projected to grow at around 8.0% CAGR from 2019 to 2025. The utilization of rats for the understanding of several diseases such as diabetes, hypertension and cognitive learning is propelling the segmental growth. Various applications of these models in gaining the understandings regarding the biological behaviour of the diseases such as heart disorders, cancer among others is boosting the segmental growth.

Based on end-use, the industry is segmented as companies, organizations, academic & research institutes and contract research organizations. The companies segment held the majority market share in the year 2018 and was valued at around USD 661.2 million. The growing research and development activities in pharma industry, testing new drugs in order to assure the safety and efficacy of drugs before moving into the clinical phase with human subjects are some of the factors that have propelled the market growth. Hence, some of these attributes have fostered the companies segment and is expected to witness a significant growth over the analysis period.

Presence of key players and rapidly increasing animal testing in biomedical research in the U.S. will boost the rat model industry demand 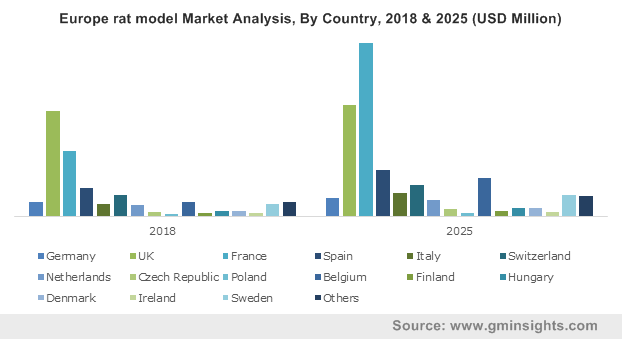 U.S. dominated the North America rat model market outlook with revenue of around USD 703.6 million in the year 2018. The presence of major biotech and pharmaceutical companies, along with established research and development institutes will enrich the industry in the country. For instance, in the U.S. each year around 10 million rat models are used for the research purposes. Furthermore, growing procedure in these models for the development and understanding of numerous diseases has uplifted the market growth in the country. Also, the ongoing research on neurological and psychiatric diseases that has affected larger section of country has foster the adoption of such models for studies. Hence, the aforementioned factors are some of the factors contributing into the market growth positively.

UK rat model industry size held the largest revenue in 2018 and was valued at USD 16.5 million. The high growth is due to ongoing research on cocaine addiction in rats along with other diseases. For instance, According to The National Drug Treatment Monitoring System, from 2018, the number of people being treated for cocaine problems increased by 18% from 2017. With the help of rat model, researchers in the country discovered a new path in the brain that links impulses with habits. Furthermore, scientists also showed that long term addiction to drugs can change the area of the brain called basolateral amygdala which is associated with the link between an emotion and a stimulus. Thus, rise in the number of these models for testing is expected to witness significant growth in the upcoming years.

Some of the leading market players in the industry include Envigo, genOway, Charles River, Horizon Discovery Group plc, Biomere, Transviragen Inc., Janvier Labs, Taconic Biosciences Inc. and Transpogen Biopharmaceutical, Inc. These players have been engaging into acquisitions & mergers, partnerships and collaborations to increase their product portfolios and reinforce their market position.

The rat model market research report includes an in-depth coverage of the industry with estimates & forecast in terms of revenue in USD from 2014 to 2025, for the following segments:

The market size of rat model surpassed USD 1 billion in 2018.
The industry share of rat model is set to achieve over 7.9% CAGR up to 2025.
Rat model is defined as the use of animal model for research in biomedical science and psychology. Rats and humans have various similarities such as physiology, similar body organs, similar genetic structure to the humans and often suffer from the same diseases. Hence, it is used by scientists and researchers to study and find cure for diseases, create new products and test the end products before being used on humans.
The inbred rat model segment dominated the overall market with USD 275.9 million revenue share in 2018.
Envigo, genOway, Charles River, Horizon Discovery Group plc, Biomere, Transviragen Inc., Janvier Labs, Taconic Biosciences Inc. and Transpogen Biopharmaceutical, Inc. are the prominent players operating in the global market.