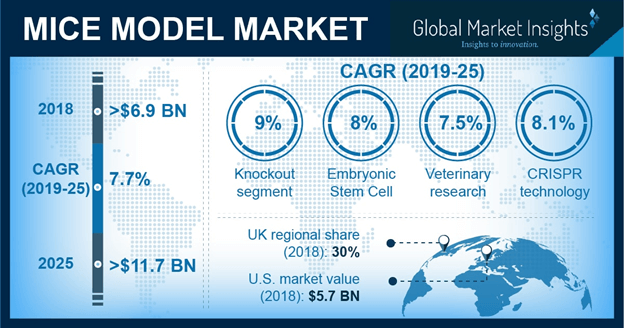 The use of mice as model organisms is the ability to model human disease in mice for research in biomedical science and psychology. One of the essential factors for using the model in research is its 95% genetic similarity with the humans. Hence, by studying mice model that have indications of diseases such as diabetes, cancer, and Alzheimer’s, the researchers can learn more about how these diseases might be treated in patients. Thus, growing use of mice for research purpose has been instrumental in achieving the goal and is expected to play an important role in augmenting the market size.

The concept of lab mice was introduced in 1920’s by Clarence Cook Little who believed that mice was the perfect model for studying cancer. Since cancer is an inheritable disease, Clarence Cook Little thought that mice were an ideal subject for his experiments due to their short life span and low maintenance. However, rats were the first mammalian species to be developed for use in the laboratory. Most in vivo assays were initially established and improved in the rat. Though, over the past thirty years, mice have rapidly overtaken rats as the preferred animal research model leading to increased mice model market growth.

The shift in popularity from rat to mice among scientists is chiefly owing to the initiation of the first transgenic mice in 1987 and development of targeted gene manipulation. Transgenic mice closely model the physiology and function of human diseases that further enable scientists to examine the effect of individual genes on disease. Also, from testing dietary supplements to formulating new cancer drugs, mice play a critical role in developing medical wonders. Mice are further used in sensory, aging, behavioural, nutrition and genetic studies along with testing anti-craving medication that could potentially end drug addiction. However, growing concern for the wellbeing of animals and rising awareness pertaining to animal rights will hinder the mice model industry growth.

Growing demand for mice model in cancer research for understanding the genetic basis of tumour development and cancer progression is boosting the market growth. Mice model are also used to check the efficacies of different anti-cancerous agents. Some of the most influential cancer drugs in the field trace their origins to discoveries with mice. For instance, Herceptin, a popular drug for breast cancer patients was developed in mice that enhances the long-term survival of the patient. Mice model have brightened the future of cancerous treatment and cure. Studies with mice have highlighted a variety of exciting potential therapies of cancer, including a vaccine to prevent breast cancer, tiny nanoparticles that delivers toxins to ovarian cancer cells and phototherapy that delivers light to destroy deep tumours. Other factors that have fostered the adoption of mice model are its easy handling and low maintenance. Hence, the above-mentioned factors are responsible for boosting the mice model market demand.

Based on mice type, the market is segmented as inbred, outbred, knockout, hybrid and others. Knockout mice model market is expected to witness a lucrative growth at 9.5% in the upcoming years. The high growth rate is owing to increase in usage of knockout mice model in studying and modelling different kinds of cancer, diabetes, lifestyle disorders, neurological disorders and heart diseases. The other factor that is contributing in the adoption of knockout mice model is the information that these models offer to the researchers regarding similar gene that causes or contributes to specific diseases in humans. These models are also further extensively used in the study of several malaria-induced pathologies. Hence, all the above-mentioned factors are contributing in the segmental growth and thereby propelling the mice model industry demand. 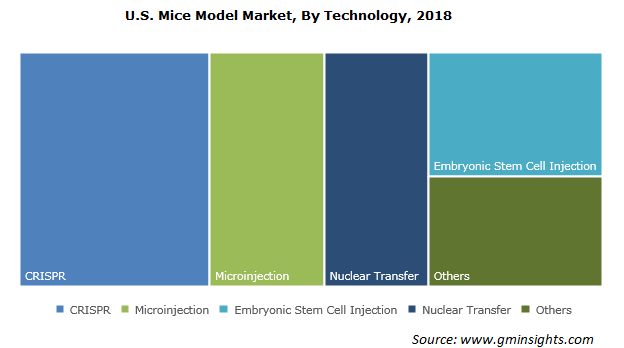 Based on technology, the market is segmented into CRISPR, embryonic stem cell injection, nuclear transfer, microinjection and others. CRISPR technology held significant market share in the year 2018 and is forecasted to expand at 8.1% CAGR over the forecast period. The high growth rate is owing to several factors such as generating custom knockouts & point mutations at significant cost reduction and reduces timelines compared to traditional gene targeting methods. CRISPR technology is further expected to pave the way for large number of new genetic mice model that is mainly used for oncology & neuroscience research. Thus, owing to these benefits CRISPR technology is expected to gain a significant traction thereby, enhancing the market growth in the upcoming years.

Growing application of mice model in research and development will augment the demand and adoption, thereby propelling the market growth

Based on application, the market is segmented into research and development, production and quality control, academics and others. Research and development segment held significant market share and accounted for around USD 4.9 billion in 2018. Rising demand for mice model in research and development activity is significantly growing with each passing year. Mice model are considered as the best models for understanding the pathogenic mechanism of Alzheimer’s disease and offers therapeutic approaches to tackle clinical progression of the disease. Thus, all these factors will positively contribute to segmental growth in the upcoming years.

Based on use, the market is segmented as human and veterinary. The use of animal testing for human research held substantial market share in 2018 and is projected to expand at around 7.7% CAGR from 2019 to 2025. The adoption of mice model for understanding of several diseases such as cancer, cardiovascular diseases, diabetes, and neurological diseases is fostering the segmental growth. Furthermore, genetic similarity between humans and mice is one of the factors that is contributing to the market growth positively.

Based on end-use, the industry is segmented as companies, organizations, academic & research institutes and contract research organizations. The companies segment held the largest revenue in the year 2018 and was valued at around USD 4.3 billion. The high revenue is due to increase in research and development activities in biotechnology and pharmaceutical industry. The demand for mice as a preclinical animal model is owing to several advantages that the mice model possesses over other animal models. With a short gestation period of twenty days, inheritance studies are accomplished in a shorter time frame than other species with longer gestation period. Hence, all these factors are contributing in propelling the companies segment market growth positively and is projected to witness a substantial growth over the forecast period.

Presence of key players and rapidly increasing animal testing in biomedical research in the U.S. will boost the global market size 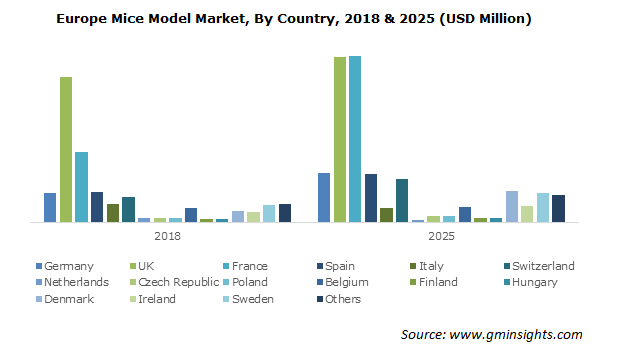 U.S. dominated the North America mice model market outlook with revenue of around USD 5.7 billion in the year 2018. Presence of major pharmaceutical and biotechnology companies, along with established research and development institutes will enhance the industry growth in the country. For instance, in the U.S. each year around 90 million mice are used for research purposes. The ongoing research on cancer and neurological disorders is propelling the market growth in the country. For instance, in 2019, according to the Alzheimer’s Association, Alzheimer’s is the sixth leading cause of death in the U.S. and around 5.8 million Americans living with Alzheimer’s. Furthermore, after every 65 second an individual in the country develops is diagnosed with the disease. Pharma companies are consistently developing new drugs in order to cure these diseases; therefore, mice are a preferred choice of researchers for understanding these diseases. Hence, the aforementioned factors are will play vital role in propelling the market growth.

UK market held the largest revenue share in 2018 and was valued at around USD 145 million. The high revenue share is attributed to the growing adoption of mice for research and development in the pharmaceutical companies. In the year 2018, around 2.7 million mice were used for the research purpose across the UK. These models are used to study atherosclerosis and understanding the abnormalities in embryo development. Thus, rise in number of these models for testing is expected to augment the market share in the upcoming years.

Some of the leading players in the industry include Charles River, Envigo, genOway, Transviragen Inc., Janvier Labs, Taconic Biosciences Inc. and Transpogen Biopharmaceutical, Inc. These players have been engaging into partnerships and collaborations, acquisitions & mergers to increase the product portfolio and reinforce their market position.

The mice model market research report includes an in-depth coverage of the industry with estimates & forecast in terms of revenue in USD from 2014 to 2025, for the following segments:

The use of mice as model organisms is the ability to model human disease in mice for research in biomedical science and psychology. One of the essential factors for using the model in research is its 95% genetic similarity with the humans.
The United States was leading the global industry with USD 5.7 billion revenue share in 2018.
Companies like Charles River, Envigo, genOway, Transviragen Inc., Janvier Labs, Taconic Biosciences Inc. and Transpogen Biopharmaceutical, Inc. are dominating the global market in the next few years.