Animal model is defined as the use of animals in research and development activities in order to understand the several biological, pharmacological and chemical phenomena. The animals and humans share significant physiological and organic structure, wherein, some of the animals share almost similar genetic structure to the humans. Hence, the animal models are used by the researchers and scientist in order to study and find cure for diseases, develop new products and test the end products before being used on humans.

Animal model have been used in experimental research to enhance human knowledge and find the solutions to complex biological and biomedical questions. New drugs are investigated in animals for safety and efficacy before they are examined in people. Animals are artificially induced with diseases in order to mimic the human condition and then used for conducting experiments. However, rising concern for the welfare of the animals and growing awareness pertaining to animal rights will impede the use of animal models hampering the market demand.

Rise in the discovery and development of new medicines, increasing demand for precision medicines and ongoing preclinical trials that require animal models are a couple of factors boosting the market growth. The increasing number of preclinical trials in pharma industry can be attributed to continuous development of new drugs and the requirement of animal models for drug testing. The analogous relationship to humans is the major factor for choosing animal model for research and development purpose. In the U.S. around 7,493 preclinical trials were conducted in 2017 as compared to 6,861 preclinical trials in 2016, around 9% increase since the last year. Moreover, the market demand for the use of non-human primates as models in scientific research continues to grow owing to their genetic similarity with humans. These animals are used to study various neurological disorders such as hepatitis, Parkinson’s disease, AIDS and among others. Thus, growing animal research studies along with rise in the demand for humanized animal models are some of the factors that are fostering the market growth from 2019 to 2025.

Based on animal type, the market statistics for animal model is segmented as mice, rats, fish, birds, cattle, pigs, amphibians, guinea pigs, dogs, cats, rabbits, monkeys, sheep, hamsters and others. Mice animal model market held the majority of market share in the year 2018 and was valued at around USD 7 billion. The high revenue share is attributed to growing usage of mice models to study various complex disorders such as lifestyle disorders, neurodegenerative disorders, and cancer research. Furthermore, mice models are utilized to gain insight into the pathogenesis of disease or to evaluate the efficacy of potential therapeutic regimens thereby boosting the segmental growth.

Based on the technology, the market is segmented into CRISPR, embryonic stem cell injection, microinjection, nuclear transfer and others. CRISPR technology held significant market share in the year 2018 and is forecasted to expand at a 9.1% CAGR over the estimation period. The CRISPR-based genome editing technology has several benefits such as increased speed, cost-effective and direct generation of mutants on a large variety of genetic backgrounds. Also, in comparison with traditional gene targeting technique, CRISPR  /Cas9, bypasses the usage of embryonic stem cells, creating a powerful platform for generating new mouse models. Thus, owing to these advantages CRISPR technology will witness a significant growth in the analysis timeframe.

Based on the application, the animal model market is segmented into research and development, production and quality control, academics and others. Research and development segment accounted for around USD 9.5 billion in 2018. The use of animals in basic research that falls under research and development segment aim to assist the researchers in understanding how animals develop and function at the physiological, behavioural, molecular and cellular levels. These researches have led to unexpected clinical benefits such as understanding of diseases like narcolepsy in mice & dogs and myasthenia gravis in rabbits that gave powerful insights pertaining to these diseases. Aforementioned factors will positively contribute to segmental growth over foreseeable future.

Based on end-use, the market is segmented as companies, organizations, academic & research institutes and contract research organizations. The companies segment held the majority market share in the year 2018 and was valued at around USD 8 billion. The growing research and development activities in pharma industry, and the usage of animals over the past century in order to advance the knowledge of diseases have boosted the adoption of animal models. Testing new drugs in order to assure the safety of drugs before moving into the clinical phase with human subjects are some of the factors that have gained a significant traction in the market. Hence, owing to these factors the companies segment is expected to witness a significant growth over the analysis period.

Presence of major industry players and rapidly increasing animal testing in biomedical research in the U.S. will boost the global market demand for animal model 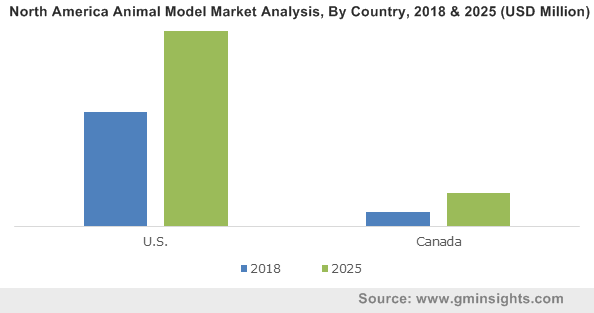 U.S. dominated the North America animal model market with revenue of around USD 7.5 billion in the year 2018. The presence of major pharmaceutical, biotech companies, along with established research and development institutes will enhance the animal model industry demand in the country. For instance, in the U.S. each year around 100 million animals are used for the research purposes. The rising number of investments by the government for the development of innovations in mice models will further spur the market growth. Furthermore, the growing usage of animal models for the development of the new therapy methods for the treatment of various diseases has uplifted the market growth in the country.

South Korean market demand is forecast to show around 11% over the forthcoming years. The high growth is due to rising spending on research and development that has soared to more than 4% of its gross domestic product (GDP). Growing number of animals used in cosmetics test in the country is another factor that is driving the market outlook. According to the statistics from the Ministry of Food and Drug Safety, in 2018, around 4,140 animals were used in cosmetics tests which were almost double the figure of 2016 that was 2,106. Thus, the rise in the number of animals for testing is expected to witness the significant growth in the upcoming years.

Some of the leading players in the animal model industry include Charles River, Envigo, genOway, Harbor BioMed, Horizon Discovery Group plc, Janvier Labs, Taconic Biosciences Inc. The Jackson Laboratory, Trans Genic Inc. These players have been engaging into mergers, acquisition, partnerships and collaborations to expand their product portfolios and reinforce their market position.

The animal model market research report includes an in-depth coverage of the industry with estimates & forecast in terms of revenue in USD from 2014 to 2025, for the following segments:

The market size of animal model exceeded USD 13.4 billion in 2018.
The industry share of animal model is expected to register over 8.6% CAGR up to 2025.
Animal model is defined as the use of animals in research and development activities in order to understand the several biological, pharmacological and chemical phenomena.
The animals and humans share significant physiological and organic structure, wherein, some of the animals share almost similar genetic structure to the humans. Hence, the animal models are used by the researchers and scientist in order to study and find cure for diseases.
The South Korean industry for animal model will register over 11% CAGR from 2019 to 2025.
Charles River, Envigo, genOway, Harbor BioMed, Horizon Discovery Group plc, Janvier Labs, Taconic Biosciences Inc. The Jackson Laboratory, Trans Genic Inc. are the leading players operating in the global market.