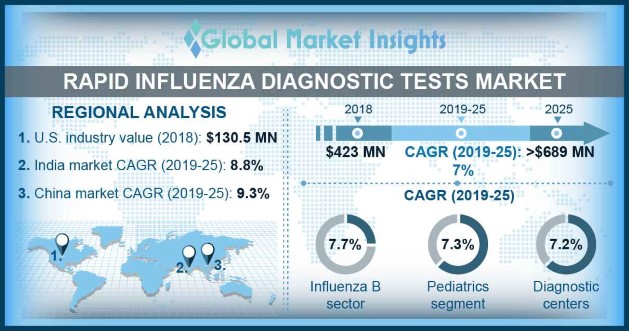 Increase in number of government programs to counter the growing influenza outbreaks across the globe will boost the rapid influenza diagnostic tests market growth over the forthcoming years. Rise in geriatric population will also play a key role in augmenting the market growth, as old people are considered more vulnerable to the influenza virus. Recent technological developments in manufacturing of advanced influenza diagnostic tests will act as a major driving factor for the growth of market across the globe. Also, growing prevalence of chronic disorders such as cardiovascular disease and diabetes across the globe will increase the probability of number of people suffering from influenza. As per the International Diabetes Federation (IDF), the prevalence of diabetes is estimated to reach around 435 million by the year 2030. Hence, aforementioned factors will enhance the growth of the market over the estimation period. 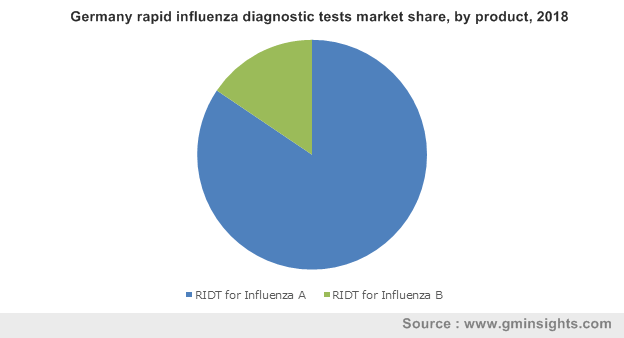 RIDT for Influenza A was valued at USD 352.5 million in the year 2018. Increase in number of people suffering from influenza across the globe will positively impact the rapid influenza diagnostic tests market growth. As per the recent research studies, Influenza A is known to be a highly communicable respiratory disease. It has resulted in several epidemic outbreaks, that have led to around 30,000 deaths per year in the U.S. annually. The major reason for the outbreak of Influenza A is due to virus that is often known as bird flu or avian flu. Increase in number of influenza A cases across the world will result in boosting the demand and adoption rate of influenza diagnostic tests, augmenting the market growth.

RIDT for Influenza B is estimated to grow at 7.7% over the forecast time period. Influenza is one of the major health burdens and sixth leading cause of death in the U.S. The most common host for Influenza B virus is humans. Influenza virus is known to mutate at slower rate as compared to Influenza A and are categorized by strains and not by subtypes. Also, these viruses take significant time to change their genetic makeup as compared to influenza A and hence, drastically reduce the risk of outbreaks. Increase in prevalence of people suffering from influenza B will augment the growth of rapid influenza diagnostic tests market growth in the near future.

Rapid influenza diagnostic tests in pediatrics segment is estimated to show substantial growth at 7.5% over the forecast timeframe. Increase in burden of influenza in children will stimulate the market growth in the near future. As per the Centers for Disease Control and Prevention (CDC), mortality, morbidity and hospitalizations related to seasonal influenza is high among the children below two years of age as compared to the adults. Also, rate of hospitalization in children without any primary health conditions is high in influenza season that usually occurs during winter season in the Northern hemisphere. Hence, rise in number of children with influenza will spur the rapid influenza diagnostic tests market growth in the near future.

Rapid influenza diagnostic tests in adults was valued at USD 324.2 million in the year 2018. Growing incidence of influenza in adults will augment the market growth over the forecast timeframe. As per the World Health Organization (WHO), around 7.5% adults across the globe are affected by influenza every year. Influenza prevalence is less in younger adults and results in less frequent hospitalization as compared to pregnant women, pediatrics and adults above 65 years of age. Growing number of adults suffering from influenza will result in rise in demand and adoption rate of rapid influenza diagnostics tests, fueling the business growth in the near future. 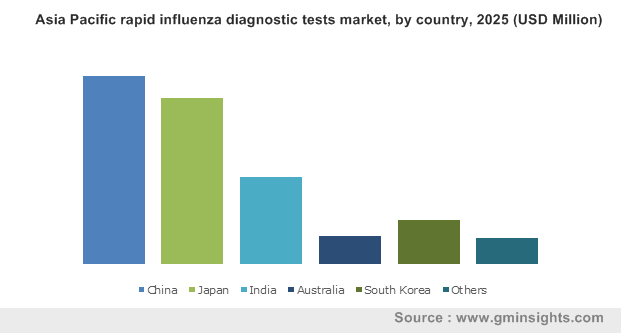 U.S. dominated the North American market and was valued at USD 130.5 million in the year 2018. U.S. is estimated to show similar market trends over the forecast timeframe owing to increase in prevalence of influenza along with rise in hospitalization. U.S. occupies major market share in the North America region owing to high patient population. As per the Center for Disease Control and Prevention (CDC), around 30,000 Americans were hospitalized for influenza between 2017 to 2018. Growing government initiatives in order to prevent influenza outbreak in the region will further propel the rapid influenza diagnostics tests market growth. For example, CDC records and manages the prevalence of influenza in the country through its national influenza surveillance system. Hence, rise in prevalence of influenza, state-of-art facilities, favorable government initiatives and presence of major players in the region will augment the rapid influenza diagnostic tests market.

Indian market is estimated to witness momentous growth at 8.8% during the forecast period. The market growth in the country is attributed to increase in infection via avian influenza A, rise in awareness among the people regarding influenza and recent growing R&D in the country. As per the recent statistics published by National Centre for Disease Control (NCDC), the number of seasonal influenza cases registered in India were around 6,700 and 226 people have died in the beginning of the year 2019. Growing concerns regarding rise in influenza prevalence in the region will further boost the growth of rapid influenza diagnostics tests market over the forecast timeframe.