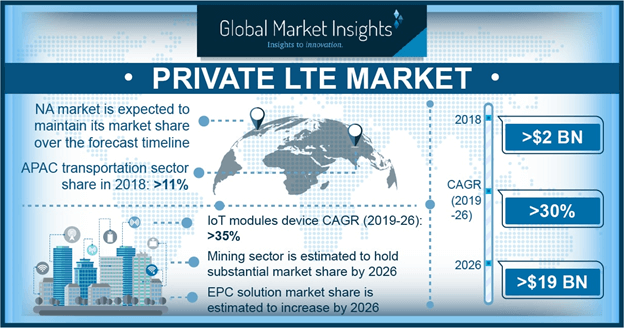 Private LTE includes core network servers and cell sites, which provide independent cellular network to a specific organization. It caters to customized network demand for mission-critical applications, reducing latency in the network. Private LTE is favorable for some distributed-enterprise use cases that include airports, oil/gas extraction, ports, railroads, factories, amusement parks, agriculture, warehouses, elements of smart cities, stadiums, and mines. It can also be deployed across extremely remote areas with poor cellular coverage.

The private LTE market growth is attributed to the increasing deployment of private LTE networks among public safety agencies. These networks enable them to improve situational awareness, reduce response times, and obtain more accurate information. To effectively respond to emergency situations, the public safety agencies as well as the Emergency Service Provider Organizations (ESPOs) are deploying private LTE networks to deliver secure mission-critical voice, video, and data. For instance, in October 2018, Halton Police in Canada teamed up with Motorola Solutions and deployed public safety LTE wireless networks for first responders. With the addition of a secure wireless network, the responders were able to share information for situational awareness. The growing demand for secured private networks with low latency and high operational efficiency at a reduced cost is expected to propel the deployment of private LTE networks across several end-use firms. However, interoperability issues between various network platforms is a prominent industry challenge.

Growing demands for EPC solution to reduce the cost of deployment

EPC solution market share is estimated to increase over the forecast timeline. The widespread adoption of private LTE technology among enterprises & industries increases the demand for EPC solutions to address the CAPEX & OPEX concerns of these organizations while deploying dedicated networks. Several companies operating in the telecom market are offering solutions based on EPC technology to reduce the cost of deployments, allowing more flexibility in the networks. For instance, in March 2019, AT&T launched FirstNet EPC that provides public safety agencies with the ability to adjust network resources according to their needs. It provides the first responders with an authority to check in on the network any time through a custom portal that offers complete visibility into the operations of the security center. 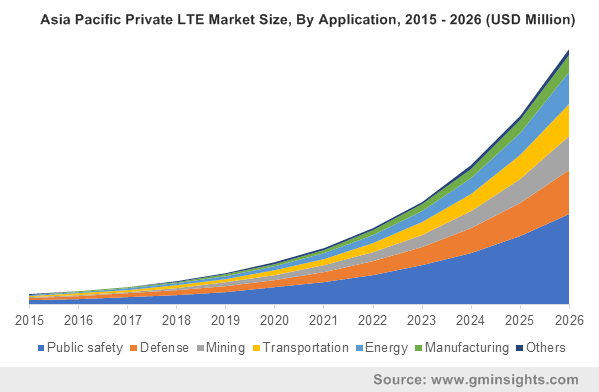 The transportation sector in Asia Pacific held over 11% private LTE market share in 2018 and is projected to grow over the forecast timeline. The demand for communication systems delivering high data capacity in conventional railways, metros, buses, and new driverless trains, significantly enhancing safety and management in rail operations along with improved service quality for passengers. The private LTE solutions provide service for various transportation applications such as real-time surveillance, data transmission for signaling systems, remote maintenance & monitoring, internet for passenger, and passenger information system. The transportation sector will significantly contribute to market growth.

The integration & maintenance is estimated to hold a substantial revenue share in the market over the forecast period. The integration service providers work closely with the vertical domains and operators to integrate the latest LTE solutions into their networks, augmenting the overall business performance. Enhanced requirements for the integration of private LTE networks into public safety departments also drive private LTE market demand. In September 2019, the U.S. Federal Communications Commission (FCC) announced that Federated Wireless, Sony, Google, Amdocs, and CommScope were approved to begin offering initial commercial services, which is called Citizens Broadband Radio Services (CBRS). The commencing of this service will further propel the market revenue for integration & maintenance services.

Backhaul architecture is expected to gain a market share over the forecast timeline due to immense popularity among the Mobile Virtual Network Operator (MVNOs), who prefer these networks to offer services in the remote areas. The technology will increase the number of connected devices, reduce network latencies, and offer an ultra-reliable network for a seamless service experience. The 5G technology and private LTE are expected to have a massive impact on the backhaul architecture. Market players are developing backhaul modem to gain market share by entering unserved and underserved markets. For instance, in May 2019, HCL Technologies introduced a high-throughput and fully configurable backhaul modem for XILINX All Programmable Zynq UltraScale MPSoC devices. The solution enables telecom OEMs to meet the stringent requirements of the next-generation networks. The use of this infrastructure will further propel the private LTE market size. 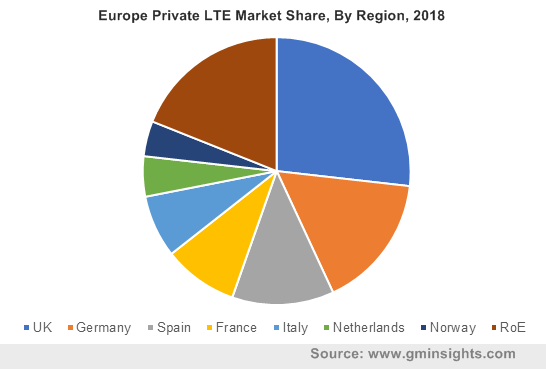 Europe market value is estimated to proliferate over the forecast timeline due to the majority of the public safety agencies in countries such as Norway, Poland, and Finland rely on TETRA networks for emergency services communications and are upgrading the network capabilities by enabling integration with advanced wireless solutions including broadband and LTE. For instance, in July 2019, BDBOS, a German public -safety network, announced its expansion of the digital radio network with high-performance data services. The spectrum enables security & rescue teams to deploy communications services in their mission-critical applications. The telecom companies operating in the industry have expressed their need to attain a certain spectrum to meet the needs of next-generation networks as data continues to grow.

The companies operating in the industry are developing own private LTE network by partnering with other players in the ecosystem. These firms are deploying technology in their campuses to test the compatibility of various devices ranging from smartphones to IoT. This will help companies learn about the loopholes and drawbacks of technology. For instance, in October 2019, Syniverse, a business & technology service provider for the telecommunication firms started developing & deploying its own private LTE networks at its headquarters. The company partnered with Federated Wireless and Ruckus Wireless to develop own private LTE using Syniverse’s Evolved Packet Core (EPC). The firm is anticipated to test the compatibility of devices ranging from IoT to smartphones with technology. This will help Syniverse gain market share over the forecast period.

The private LTE market research report includes in-depth coverage of the industry with estimates & forecast in terms of revenue in USD from 2015 to 2026 for the following segments:

The market growth is attributed to increasing deployment of private LTE networks among public safety agencies. These networks enable them to improve situational awareness, reduce response times, and obtain more accurate information.
Europe market share is estimated to proliferate over the forecast timeline due to majority of the public safety agencies in the region rely on TETRA networks for emergency services communications and are upgrading the network capabilities by enabling integration with advanced wireless solutions including broadband and LTE.
The transportation sector in Asia Pacific held over 11% market share in 2018 and is projected to grow substantially over the forecast timeline. The private LTE solutions provide service for various transportation applications such as real-time surveillance, data transmission for signaling systems, remote maintenance & monitoring, internet for passenger, and passenger information system.