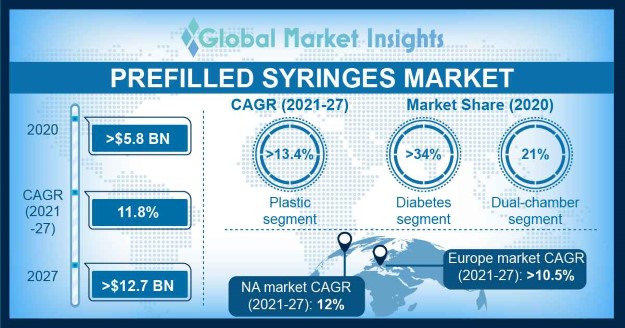 Growing demand for advanced drug delivery devices for accurate dosing and improved safety will propel the market growth. Increasing prevalence of diabetes and rheumatoid arthritis, and escalating adoption of biosimilars in developed regions are some other factors that will fuel the market expansion. Additionally, the COVID-19 pandemic and similar other historical public health emergencies have shown importance of advanced drug delivery systems during tough times.

Advances in prefilled syringes technology will escalate the market demand

The single-chamber design segment in the prefilled syringes market exceeded USD 4.6 billion in 2020 an account of advantages pertaining to single-chamber prefilled syringes over vials such as precise dosing and safety. Moreover, simple storage and ease of usage associated with single chamber design will increase its preference over the forecast period, thus also proving beneficial for the overall industry expansion.

North America prefilled syringes market is predicted to showcase around 12% growth rate till 2027 owing to the rising geriatric population base susceptible to chronic diseases in the U.S. and China. High acceptance of patient safety measures along with rapid adoption of prefilled syringes in this region will further enhance the market expansion. The market will also prosper due to the presence of major industry players with strong distribution network that are associated with prefilled syringes business.

Some of the prominent companies functioning in the prefilled syringes market include Gerresheimer, Stevanato Group, Baxter International, Catalent, Becton Dickinson (BD), Fresenius Kabi, SCHOTT, and others. These market participants are undertaking several organic and inorganic growth strategies to capture a higher revenue share in this industry.

The prefilled syringes market research report includes an in-depth coverage of the industry with estimates & forecast in terms of revenue in USD from 2016 to 2027, for the following segments:

The global prefilled syringes industry size was over USD 5.8 billion in 2020 will reach a valuation of over USD 12.7 billion by 2027.
The glass-based prefilled syringes market size had surpassed USD 4.1 billion during 2020 due to their wide use for the delivery of highly viscous medications across distinct therapeutic areas.
The industry share from single-chamber design segment had reached USD 4.6 billion in 2020 with benefits like precise dosage and improved safety.
The diabetes segment held over 34% of the global market share in 2020 and will grow owing to the constant use of medications during treatment of the disorder.
North America prefilled syringes industry share will register around 12% CAGR between 2021-2027 with consistent rise in geriatric population prone to chronic disorders across the U.S.
Customize this Report
Inquiry Before Buying