Biosimilars Market size surpassed USD 30 billion in 2021 and is estimated to register around 14% CAGR between 2022 and 2030. According to a recently published article, various drugs losing their patents, governments focusing on decreasing healthcare expenditure are likely to drive the overall business landscape. 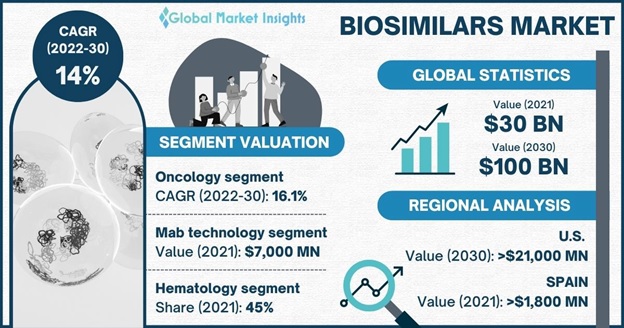 The cost effectiveness of biosimilars makes them a preferred choice for treating various chronic and rare diseases globally. Hence, cost-effectiveness is a major factor to boost the product demand for this market. According to a recently published article, the sales for follow-on biologics such as trastuzumab, rituximab, and bevacizumab, which are indicated for various cancers have been rapidly rising globally. The company also estimated that the use of these drugs over the next decade would save around USD 100 billion, globally. The loss of protection (LoP) events of original drug brands over the forthcoming years is another driver which will facilitate the growth of the biosimilars industry.

Patent expiry of the blockbuster biologics will provide manufacturers the necessary go-ahead to develop novel products. For instance, as per the recently published article in July 2021, it was illustrated that around 15 best seller drugs such as Humira, and Keytruda, are losing their patent in the forthcoming decade. Thus, the market for subsequent entry biologics is set to witness major development due to the patent expiry.

FDA defines biosimilars as a highly similar biological product that has essentially no differences from an already approved FDA reference product, meaning the biosimilar and the reference product are structurally and functionally similar in nature. These products are made using state-of-the-art technology to compare characteristics of the target product and reference product such as their purity, bioactivity, and chemical identity. Minor differences in the clinically inactive components such as a stabilizer or a buffer are acceptable.

However, the availability of alternative medicines poses significant threat for the biosimilars market. These drugs are structurally modified biologic drugs which lead to changes in the efficacy and safety of the drug. Thus, the complex biologics whose mechanism of action is unclear, can be risky.

Furthermore, the process of developing the drugs is significantly difficult and employs high investments, procedural competences, expertise in clinical rials, quality control systems and much more. The manufacturers are mandated to invest in systematic clinical trials and post-approval monitoring of these drugs for safety. Manufacturers also pose challenges in controlling the variability during the production of biosimilars as opposed to their reference products. They are assessed for high quality standards in terms of safety and efficacy. Regulatory bodies across the globe mandate the requirement of supplementary preclinical and clinical data to illustrate the manufacturing process to ensure the safety and efficacy of the product. Thus, to ensure the absence of variability between the target products and their reference drugs is a tedious process, which requires numerous additional efforts from the manufacturers. Hence, the aforementioned parameters will impede the industry growth.

The COVID-19 pandemic rendered catastrophic effects on the world’s economy, which did not spare the healthcare ecosystem. High influx of funds in innovating treatment for the coronavirus led the pharmaceutical industry into an overdrive. The demand for IL-6 targeted tocilizumab rose exponentially due to its application in treating severe COVID-19 cases during the peak of the pandemic. This led to a snowballing effect wherein three more biological drugs, anakinra, the IL-1 receptor antagonist, rilonacept, the soluble decoy receptor and canakinumab with anakinra, the neutralizing monoclonal anti-IL-1 β antibody were commercialized in the U.S. and were investigated as a likely treatment for coronavirus. There was an unprecedented demand for these drugs for the emergency use in treating severe COVID-19 cases globally, which further led to the demands for fast approvals of biosimilars of these drugs. Market players thereby focused on research and development of novel products, not only for the treatment of coronavirus, but for other applications as well. Thus, the COVID-19 pandemic proved to be an accessory in the fast-growing demand for biologic medical products and positively impacted the biosimilars market statistics.

Rise in demand for biosimilars can be attributed to their cost-effectiveness.

Increase in demand for biosimilars will result in promoting the business growth in the future. According to the American Journal of Managed Care (AJMC), the biosimilar drugs are priced 20% to 30% lower than their reference drugs. The study conducted by the AJMC revealed that the use of these drugs will lead to savings of USD 102.5 billion, from 2014-2025. Their lower cost of results in effective treatment of patients as well as cost-cutting of the treatment will be a major growth factor. Also, the price competition between follow-on biologics and reference drugs induces a downward effect on the prices of the reference biologics, thereby augmenting the business expansion.

The 2010 Affordable Care Act (ACA) empowered the FDA to develop a specialized regulatory pathway for the approval of biosimilars, wherein the FDA also indicated that the manufacturers would require lesser costs and decreased approval times compared to the reference product manufacturers. The European Union (EU) also devised a separate pathway for the approval of biosimilars. These regulations by the FDA and EU in turn ensured price competition amongst the manufacturers, and lesser prices for the payers. The cost-effectiveness of these drugs also improves the overall healthcare spending via two ways, the lower unit price of a biologic due to its competitor drug, increased accessibility to variety biosimilars for the patients. Thus, the overall competitive costs of the subsequent entry biologics are projected to aid their demand over the analysis period. 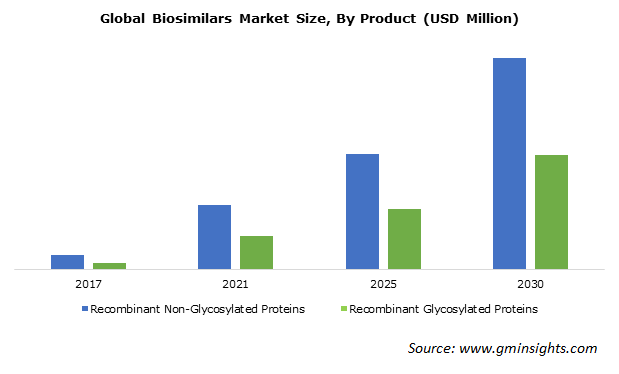 The recombinant non-glycosylated proteins segment dominated the market with a revenue share of around 65% in 2021. Amongst the recombinant non-glycosylated proteins, granulocyte colony-stimulating factor (filgrastim) accounted for the highest market share and was valued at around USD 9,650 Million in 2021. This high market share is primarily contributed by the rising prevalence of cancer patients and high treatment adoption rate. The technological advancements have led to cancer being a somewhat manageable disease during the recent times. The chemotherapy and radiotherapy prescribed to cancer patients leads to some of the major side effects such as neutropenia or low white blood cells.

Filgrastim is majorly used to treat the neutropenia caused by cancer medications by aiding the bone marrow to produce new granulocytes. Filgrastim forms a major part of the supportive therapy in treating cancer patients. For instance, according to the American Cancer society, around 200,000 new cases of breast cancer and 60,000 new cases of leukemia were diagnosed in the U.S. in 2022. Thus, the rising prevalence of cancer is one of the major drivers for the demand for biosimilars industry, for treatment as well as adjunctive therapies, globally.

Biosimilars used for diverse applications will help the industry landscape

By application, the biosimilars market is segmented into hematology, oncology, autoimmune diseases, growth hormone deficiency, diabetes, and others. The hematology segment accounted for around 45% revenue share in 2021 and was valued at USD 13,600 million during the same year. These drugs are used in hematological conditions because of cancer therapies and for hematologic malignancies such as leukemia. Rituximab is an approved treatment for both non-Hodgkin lymphoma (NHL) and chronic lymphocytic leukemia (CLL). According to the Leukemia & Lymphoma society, leukemia was the sixth major cause of cancer deaths in males in the U.S. and more than 900,000 new cases of lymphoma were diagnosed in the U.S. in 2021 alone. The rising prevalence of leukemia is directly proportional to the high demand for biologic medical products globally and is expected to help the market surge over the analysis period.

The in-house manufacturers segment surpassed USD 23,000 million in 2021. This can be majorly attributed to the fact that key players of this industry are the manufacturers of the products themselves. For instance, the Biocon biologics, an Indian biopharmaceutical company is of the major manufacturers and exporters of the target products across the globe. The rising demand due to the drugs’ effectiveness in numerous applications is expected to surge over the analysis period. Manufacturers are always focused on R&D activities in improving their already approved products and developing novel drugs. The upcoming patent expiry of blockbuster biologics also add up to the numerous opportunities for growth in this business. All the aforementioned factors prove in-house manufacturing to be a more efficient to develop the products.

Product approvals to spur the regional revenue growth of the business

U.S. biosimilars market is anticipated to reach over USD 21,000 million by 2030. This high share can be attributed to several new product approvals in the U.S. in the past few years. Since 2020 till April 2022, around 9 drugs were approved by the FDA, bringing the total approved biosimilars in the U.S. to 33. Additionally, the uptake of these drugs in the U.S. is trending upwards with numerous companies announcing strong sales in 2021. According to a report published by recent research article, filgrastim, rituximab, bevacizumab, trastuzumab have captured more than half of their respective market. The infliximab drug, which experienced a slow start also managed to capture somewhere less than one fourth of the U.S. by the end of second quarter in 2021. The approval of the first ever interchangeable biosimilar of insulin glargine, Semglee also helped to expand the business in the U.S. All the aforementioned factors are expected to positively impact the regional market statistics.

Some of the key market players operating in the biosimilars market include Biocon Biologics, Sandoz, Amgen, Viatris, Amgen Inc., Samsung Bioepis, among others. These players concentrate on strategic developments such as partnerships, new product launch & commercialization, vertical integration for market expansion. Furthermore, these players are heavily investing in R&D activities that enables them to innovative & capitalize on these products that further helps to garner maximum revenue in the industry.

Biosimilars market research report includes an in-depth coverage of the industry with estimates & forecast in terms of revenue in USD from 2017 to 2030, for the following segments:

Global biosimilars market size surpassed USD 30 billion in 2021 and is predicted to record around 14% CAGR during the forecast period of 2022-2030.
The recombinant non-glycosylated proteins segment captured around 65% revenue share of global biosimilars industry in 2021 due to the rising percentage of cancer patients who are opting for this treatment.
The hematology segment accounted for 45% revenue share of global biosimilars market in 2021 as these drugs are used for hematologic malignancies like leukemia.
U.S. biosimilars market value is anticipated to cross USD 21 billion by 2030 as the government has increased the approval rate for several pharmaceutical products in recent years.
Customize this Report
Inquiry Before Buying