The rapid growth of the semiconductor industry is justified by the fact that nearly 25,710 laborers are employed in semiconductor processing industries in North America. The photoacid generators market is expected to witness an upsurge in the coming years owing to the widespread use of photoengraving & lithographic process. This is mainly attributed to the cost effectiveness and excellent performance parameters of these two processes. 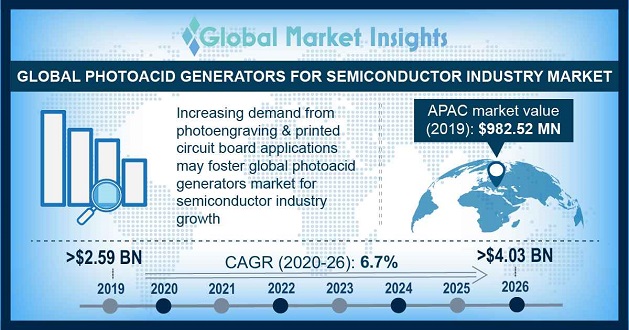 Increasing efforts by industry players to invest heavily into research and development to provide technologically more advanced semiconductor products are likely to further boost the photoacid generators market growth. Moreover, the increasing trend of original equipment manufacturers to assign the task of product design and development to Electronic Manufacturing Service (EMS) partners to reduce overall costs is likely to promote the growth of semiconductor industry.

Increasing preference of youngsters towards the use of gaming devices, mobile phone, laptops and other high-tech electronic gadgets with technologically more advanced features is expected to raise the photoacid generators market demand. Rising demand for consumer electronics such as robots, mobile radio, and residential appliances coupled with changing consumer preferences towards leading a high-tech lifestyle and the need for internet utilization may further contribute to the growth of the market.

The high cost of manufacturing PAG due to the presence of iodonium or sulfonium salts of fluorometallate anions -) or [BAr4F]-anions, which suffer from certain drawbacks such as toxicity, hydrolysis or tough synthesis is likely to hamper the photoacid generators market revenue to some extent during the forecast period. The high cost of PAG acids may decline the growth of the market further. For instance, in the U.S., PAG acids cost around USD 80/kg, which increases the overall production cost of semiconductors. 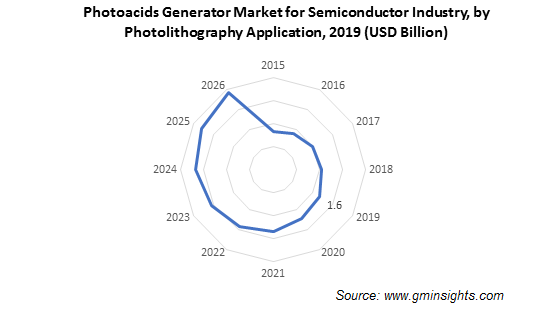 The photoacid generators market is segmented by application into photolithography, photoengraving, printed circuit boards and others. Photolithography is further classified by type into EUV, I-Line, ArF and KrF. EUV is further sub-divided into ionic PAG and non-ionic PAG.

Photolithography application segment is expected to witness an upsurge owing to increasing demand from consumer electronics and increasing consumer preference towards the use of technologically advanced electronic gadgets. Moreover, the increasing use of photolithography process in fabrication of PCB and microprocessors coupled with the rise in production of computer chips and integrated circuits (IC) may further boost the photoacid generators market sales. Photolithography application accounted for a market size of USD 1.6 Billion in 2019 growing at a CAGR of 7.2% throughout the assessment period.

Increasing demand for ionic PAG for manufacturing Integrated Circuits (ICs) through EUV processes may augment the share of ionic PAG in EUV applications. Increasing application of triaryl sulfonium salts in UV protective coating used on electronic devices is likely to boost the photoacid generators market demand. EUV application is expected to reach USD 98.8 Million by 2026 from USD 59.19 Million growing at a CAGR of 7.6% throughout the forecast period.

I-Line photolithography is expected to surpass USD 467.82 million by 2026 growing at a CAGR of 7.2% throughout the forecast period. The multipurpose functionality of aryldiazonium salts for chemical synthesis may boost the photoacid generators market demand. The increasing applications of diaryliodonium as electrophilic arylating reagents in reactions with various nucleophiles is expected to boost the growth of ionic PAGs in I-Line photography application.

The property of Diazonapthoquinone (DNQ) to convert to a derivative that is liable to etching on coming in contact with light may raise the demand for DNQ as a non-ionic PAG in the semiconductor industry. Non-ionic PAG in I-Line application is expected to reach USD 135.90 Million growing at a CAGR of 6.8% during the assessment period.

The increasing demand for ArF from microelectronic chip manufacturing and production of semiconductor ICs will be a major contributor toward industry growth. Increasing applications of triphenylsulfonium perfluorobutanesulfonate as an ionic PAG in photolithography may also promote the growth of the photoacid generators market in the coming years. Increasing demand of oxime sulphonates in mass production of semiconductor chips is likely to drive the demand for non-ionic PAGs in ArF application. ArF application segment garnered a valuation of USD 939.78 in 2019. 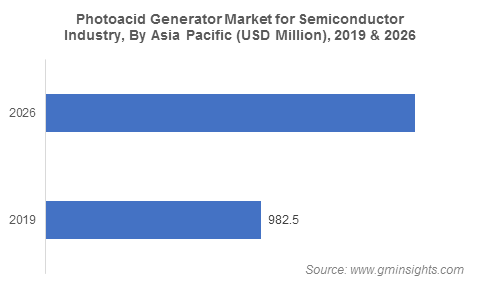 The presence of major market players in East-Asian countries, mainly China, Japan, South Korea and Taiwan is expected to further boost the market growth in the region. Presence of Taiwan-based, world-leading ODMs such as Foxconn and Quanta or foundries such as Taiwan Semiconductor Manufacturing Company [TSMC] makes Taiwan a lucrative market for semiconductors, thus promoting the photoacid generators market growth.

As per a report published by the semiconductor Industry Association, sales of electronics and semiconductor equipment was over USD 282 billion in 2018. China alone accounted for about 56% of total semiconductor industry in Asia Pacific and 34% of the total global market. The increasing consumption of consumer electronics and technologically advanced electronic gadgets such as mobile phones, laptops and tabs is expected to further foster the photoacid generators market growth in the region.

Acquisition and partnerships among industry participants to accelerate market competitiveness

The market may witness consolidation in the form of acquisitions & joint ventures, and mergers which may strengthen product portfolio and augment share for global photoacid generators market. Besides players are also investing in research and development activities to develop better quality products and sustain their position in the market.

In February 2016, JSR Micro NV, a wholly owned subsidiary of JSR Corporation a leading materials company entered a joint venture with imec, a world-leading nanoelectronics R&D center to enable manufacturing and quality control of EUV lithography materials for the semiconductor industry. This strategic joint venture would enable the company to enhance its product offerings in the EUV Lithography segment.

The global photoacid generators market report includes in-depth coverage of the industry with estimates & forecast in terms of volume in Tons & revenue in USD Million from 2015 to 2026 for the following segments:

In 2019, Asia Pacific led the global photoacid generators industry, with a market size of USD 982.52 million. APAC market may depict 7.1% CAGR through 2026, driven by rising demand for cloud computing and mobile communications.
Rising deployment of organic electronic devices may increase halogen based compounds demand as non-ionic PAGs in KrF application. KrF application segment may hit USD 488.34 Million by 2026, with an anticipated 7.6% CAGR through 2026.
Increasing demand of oxime sulphonates in mass production of semiconductor chips is likely to drive the demand for non-ionic PAGs in ArF application. ArF application segment garnered a valuation of USD 939.78 in 2019.
Ionic PAG market size from I-Line photolithography application segment may cross USD 467.82 million by 2026 with a targeted 7.2% CAGR, owing to diaryliodonium being robustly used as electrophilic arylating reagents in reactions with nucleophiles.
Global non-ionic PAG market share from I-Line application may hit USD 135.90 Million with 6.8% CAGR through 2026, powered by rising demand for DNQ as a non-ionic PAG in semiconductor industry.
Photolithography application held USD 1.6 Billion of market size in 2019 and may depict 7.2% CAGR through 2026 driven by rising deployment of photolithography for fabricating PCB and microprocessors.
In 2019, EUV application was valued at USD 59.19 Million and will cross USD 98.8 Million by 2026 with a projected 7.6% CAGR through the assessment timeline, due to rising ionic PAG demand for manufacturing ICs via EUV processes.
Customize this Report
Inquiry Before Buying