Methyl Ethyl Ketone (MEK) Market size was estimated at over 1.4 million tons in 2014 and is likely to exceed 1.9 million tons by 2022, with gains at over 4%. Increase in paints & coatings demand owing to growth in construction spending, particularly in Asia Pacific and Middle East & Africa, is likely to drive the industry over the forecast period.

Methyl ethyl ketone market is widely used as solvent in paints & coating applications owing to properties such as low viscosity, strong solvency and high evaporation rate. It is mainly used with polyurethane, epoxy, acrylic and polyester coatings due to miscibility with hydrocarbons without any effect on its characteristics. 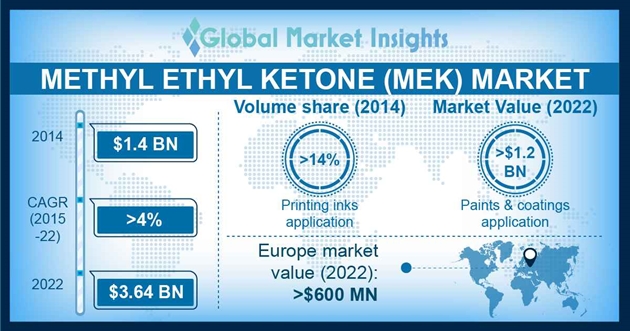 Global increase in vehicle sales over the past few years and expected production rise over the forecast period is likely to drive methyl ethyl ketone market share for paints & coating applications. It is also used as solvent in automotive paints industry which is essential for durable coating. Global vehicle (commercial & passenger) production was close to 84 million units which is expected to surpass 100 million units by 2018.

It is used in conjunction with alcohol for pharmaceutical industry to manufacture products such as anesthetics, antiseptics, lotions and medical drugs. Increasing number of healthcare facilities coupled with advancing medical research is likely to drive demand for pharmaceutical applications. Breaking quaternary structure of proteins and increase drug penetration are major factors for its use in pharmaceutical applications. Favorable crude and downstream petrochemical supply is expected to result in an attractive methyl ethyl ketone market price trend over the forecast period.

Stringent environmental norms over health concerns are likely to challenge industry growth. The EPA enacted the 33/50 Program which invites the voluntary reduction of the emissions of certain high priority toxic materials which includes MEK.

Printing inks application accounted for over 14% of the total volume in 2014 and is likely to witness significant growth rate up to 2022. Methyl ethyl ketone (MEK) is extensively used and preferred solvent in printing industry owing to advantages offered such as excellent drying times, adhesion with substrates such as plastics, metals & glass and allowing formulation of specialized inks. Growth of end-use industries such as food processing, pharmaceuticals and cosmetics are anticipated to drive the methyl ethyl ketone market demand for printing ink applications. 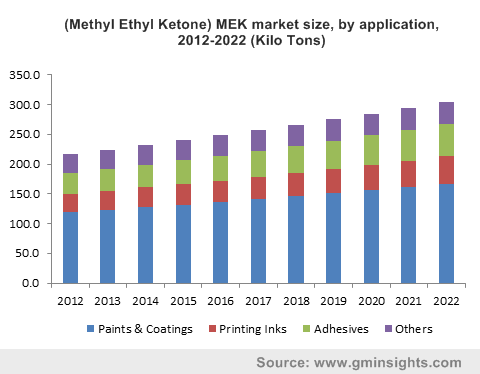 APAC market size was dominant with China being the largest consumer base in 2014. China accounts for more than 35% of the total installed capacity. Growth of end-use industries such as construction, automobiles and electronics is likely to drive the methyl ethyl ketone market share in the region.

North America industry was majorly driven by the U.S. and occupied a share of over 18% in 2014. North America is likely to witness moderates growth rates during the forecast period owing to recovery of industries post the recession coupled with emphasis on using green solvents driven by strict environmental norms.

MEA occupied a smaller chunk of the global share with countries such as Saudi Arabia, Qatar, Bahrain and UAE methyl ethyl ketone market expected to witness an increase from paints & coatings demand owing to growth of construction industry.

Methyl ethyl ketone market report includes in-depth coverage of the industry, with estimates & forecast in terms of volume in Tons and Square Meters and revenue in USD from 2015 to 2022, for the following segments:

In 2014, the methyl ethyl ketone industry size valued more than 1.4 million tons and is forecast to surpass 1.9 million tons with more than 4% gains through 2022.
Methyl Ethyl Ketone Market is likely to depict a CAGR of 7% over 2022.
Paints and coating application dominated the methyl ethyl ketone market size with a valuation of USD 1.2 billion in 2014 and is projected to witness significant gains through 2022.
In 2014, the Asa Pacific methyl ethyl ketone industry size was dominant with China being the major customer base. It accounted for over 35% of the complete installed capacity due to expansion of construction, electronics, and automobiles sectors.
Printing inks application accounted for more than 14% of total revenue in 2014 and is projected to witness a noteworthy growth rate through 2022, owing to the growth of end-use industries like pharmaceuticals, food processing, and cosmetics.
Customize this Report
Inquiry Before Buying