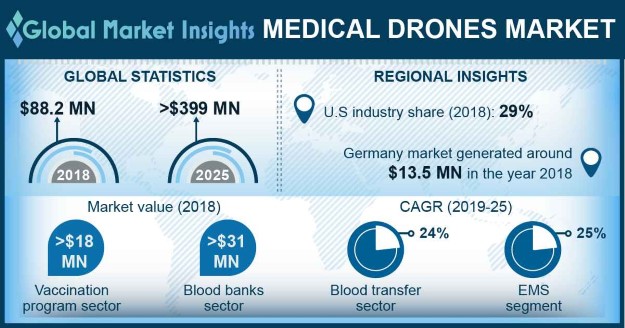 Growing applications of drones in healthcare sector will prove beneficial for medical drones market growth. Drones cater to urgent needs of patients with the delivery of required medicines, vaccines, antivenin and blood products in local areas. Rapid delivery helps healthcare professionals to deliver treatment quickly that could save patient’s life. Moreover, they can deliver medicine to bedside of a patient that results in less error in medication administration. Such wide range of applications of drones will augment business growth over forecast period.

Increasing government initiatives aimed at developing Unarmed Arial Vehicles will encourage technological innovations. For instance, in 2018, government of Tanzania and DHL partnered to launch medical drone delivery program. Zipline is also working to deliver distribute blood, life-saving medications and vaccines. Government’s main objective behind these initiatives is to save lives of people by providing medications in the hour of need. However, complications associated with medical drones may hinder the industry growth to some extent.

Blood transfer segment is anticipated to witness around 24% growth over the analysis period. Drones are used in transferring blood samples between healthcare facilities to accelerate HIV diagnosis in infants. Moreover, drones can cover three hours of distance in around fifteen minutes. As a result, in case of emergencies they play pivotal role in transferring blood to patients. Furthermore, blood is required in all major surgeries and during childbirth. Many patients die if they are deprived of blood during emergency cases trauma cases. As a result, increasing need for quick delivery of blood will increase adoption of drones augmenting the segment growth.

Vaccination program segment was valued more than USD 18 million in 2018 and it is anticipated to witness lucrative growth in near future. The growth can be attributed to advantages offered by medical drones in delivering vaccines to remote areas in less time. Some remote areas such as Cook’s Bay (Canada) are only accessible through boat that makes it difficult to deliver necessity vaccines to kids and pregnant women. Moreover, various associations such as UNICEF are funding medical drones in order to make vaccines available during emergency cases and in remote areas, thereby fueling segment growth.

Emergency medical services (EMS) is anticipated to grow around 25% over the forecast timeframe. Developing and under-developed countries are facing challenges to have access to treatment in emergency cases such as cardiac arrest and vehicle accidents. EMS is responsible for timely provision of appropriate interventions, rapid assessment and prompt transportation to nearest health facility. Drones have potential to transform emergency services to save many lives. Transferring of vaccines, blood, medications, etc in less time will help doctors to provide quality treatment. Thus, increasing usage of medical drones in EMS will augment its demand that will drive segmental growth.

Blood banks segment was valued more than USD 31 million in 2018. Blood transfer in underdeveloped countries is a huge task due to unfavourable road conditions. Medical drones transfer blood, plasma and platelets from blood banks to hospitals and clinics located in remote places. Timely blood supply help to avoid complications during emergency cases such as childbirth, surgeries, organ transplant and cerebrovascular diseases. As a result, blood banks are increasingly implementing drones to deliver blood that should escalated the segment growth. 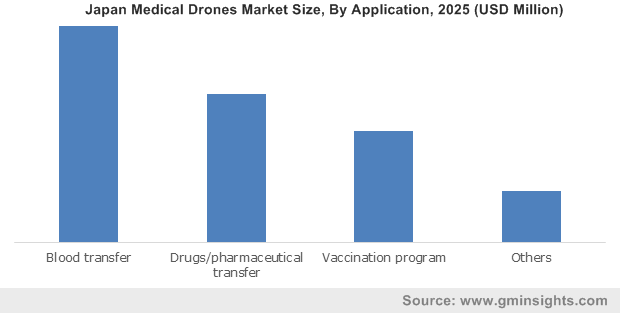 Germany medical drones market was valued around USD 13.5 million in 2018. Significant growth can be attributed to initiatives undertaken by leading companies. German logistic company DHL has launched small drones that will transfer medications to coastal areas of country. It has developed advanced drone that don’t require runway to take flight. Additionally, it has temperature-controlled storage unit that delivers medicine at desirable temperature. Thus, growing usage of medical drones in delivering medications in Germany will prove beneficial for market growth. 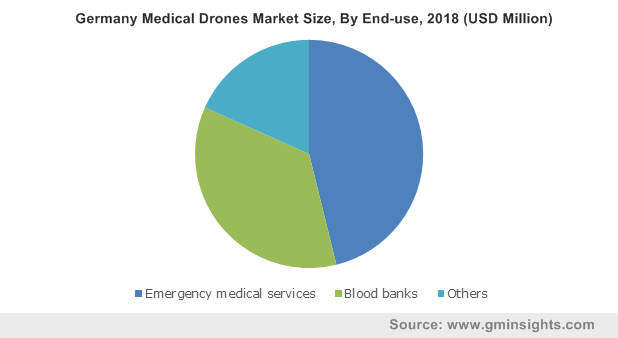 The U.S. medical drones market accounted for around 29% revenue share in 2018. Several environmental factors often make it difficult to deliver biological components on time in emergency cases. Drones serve as an effective alternative for transporting blood during emergency situations. Increasing usage of drones for medical deliveries coupled with favourable government initiatives will surge its demand over foreseeable future.

Prominent industry players operational in medical drones market are DHL, DJI, Embention, Flirtey, Matternet, Vayu and Zipline. Industry players are implementing strategies such as expanding distributional channels in untapped locations, collaborations and new product launches to garner higher revenue shares and sustain in the industry. For instance, in April 2019, Zipline planned expansion in drone delivery in Ghana. These drones will deliver vaccines to remote areas. This activity will help company expand its operation in Africa region.

Medical Drones industry can be traced back to late 1800 and early 1900 for military operations. Initially drones were used to spy on countries during cold war. The first target drone was developed between 1933 and 1935 at RAF Farnborough by combining fuselage with wings and engine. Drones were also used in battlefield surveillance, target practice and anti-submarine warfare. Applications of drones in healthcare were limited until past few years. Currently, drones are being used in healthcare sectors, however the industry is still in budding stage. They are used in transporting important blood products and emergency medications up to 5 pounds in remote areas. In 2016, medical drones started delivering necessary medications and blood products in Rwanda helping people getting access to biologics, that saved life of people in need. Traditionally, regulatory policies have kept restriction over the usage of drones to some extent. However, several countries are now accepting drones in healthcare and developing regulatory policies for usage of drones. Government is undertaking several initiatives to develop medical drones in order to offer service in niche areas. As a result,  industry should experience lucrative growth opportunities over foreseeable future.