Sperm Bank Market size is projected to experience substantial progress from 2020 to 2026. Sperm bank is an enterprise or facility that purchases, stores, and sells human semen. Sperm bank services provides an opportunity to lesbians couples, single women or heterosexual couples to conceive a baby. The growing range of services that is available through sperm banks allow more couples to have choices over the issues of reproduction. Thus, the market is anticipated to witness a substantial growth in the upcoming years. 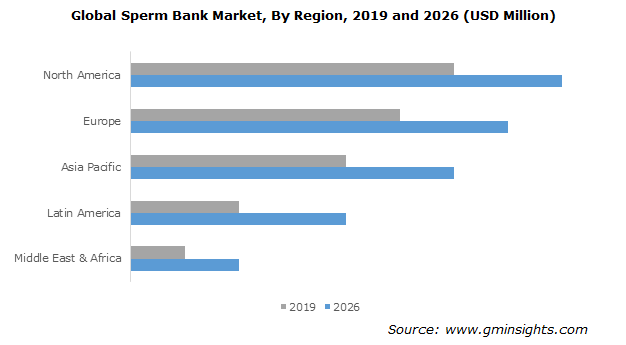 Growing incidence of obesity is one of the leading factors that causes infertility. Obese women are prone to develop high risk for reproductive health such as infertility, miscarriage and conception rates. Rising concerns of male infertility owing to insufficient sperm volume is anticipated to propel the demand for sperm bank services. According to the recently published article, 17% couple in the U.S. deal with infertility and around 30% of the infertility cases are due to male infertility in the U.S. Hence, owing to these factors the sperm bank market revenue is expected to witness a significant growth in the forecast period.

Growing government initiatives to offer better reimbursement scenario and rising incidence of infertility cases are driving the market growth. Rising lifestyle changes coupled with other factors such as genetic factors, exposure to certain chemicals and toxins, problems with sperm or egg production are projected to drive the market growth. Furthermore, growing acceptance of Gay, Bisexual, Lesbian, Transgender (LGBT) community is one of the factors that is boosting the sperm donations across various countries. Hence, the above-mentioned factors are expected to witness a substantial growth in the upcoming years.

Based on donor type, the sperm bank market is segmented as known donor, anonymous donor, client donors and directed donors. The known donor market is expected to witness a significant growth in the upcoming years. This is due to the fact that various countries such as UK, Australia, Sweden and others have introduced a mandate that supports the right to the offspring to know their biological parent. Furthermore, the identity of known donors ensures the availability of the medical background of the donor. Thus, the adoption of sperms from known donors is expected to contribute to the segment growth.

On the basis of service type, the market is bifurcated into sperm storage, semen analysis, and genetic consultation. Sperm storage segment is forecasted to show substantial growth over the forecast period owing to advantages such as rising prevalence of infertility, modernization in cryopreservation techniques and growing demand for IVF procedures. Hence, the above-mentioned factors will boost the sperm bank market demand in the upcoming years.

U.S. sperm bank market share is estimated to hold a majority market share in 2019 owing to the growing prevalence of infertility population in the country. According to the Centers for Disease Control and Prevention, around 6.1 million women in the U.S. aged between 15-44 experience difficulty in conceiving. The major reason that causes infertility is due to fertility problems in women and men. The other factors that causes infertility in women in the U.S. are smoking, stress, high alcohol consumption, diabetes, poor diet and among others. Hence, all the above-mentioned factors are impelling the market growth in the country.

Some of the major market players involved in the global sperm bank market share are Cryo-Save AG, Androcryos, New England Cryogenic Center, Indian Spermtech, European Sperm Bank, Seattle Sperm Bank, Fairfax Cryobank Inc., London Sperm Bank, Xytex Corporation and among others. The key players are emphasizing on major industry strategies such as mergers & acquisitions and are taking a few initiatives to maintain a competitive edge in the market. For instance, in 2018, California Cryobank, one of the leading donor egg and sperm bank announced that it was acquired by GI partners from leading healthcare investors NovaQuest Capital and Longitude Capital.