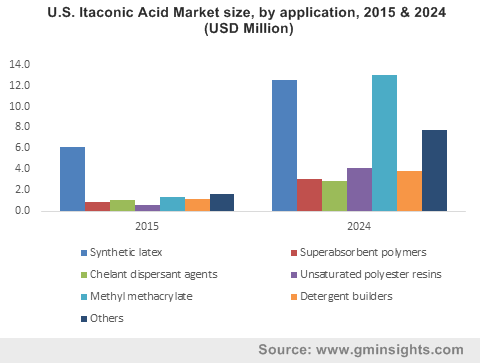 Mitsubishi Rayon and its subsidiary Lucite International are working on multiple approaches to produce bio-MMA. Lucite has already patented MMA production routes from Itaconic acid and plans to commercialize production and use by the end of 2016. However, there are multiple routes under development and are competitive. For instance, Evonik is also working on two processes which includes multi-catalytic process and metabolic routes. The industry is still at controversial stage which route will win the battle which is largely influenced by production cost.

Superabsorbent polymers are recognized as potential segment owing to its ability to replace acrylic acid and to use polyitaconic acid through polymerization. Itaconix, the U.S. based company is focusing to adopt this biotechnological route. However, several companies including Arkema, Cargill, and Novozymes are working on bio-based acrylic acid which may affect the industry growth.

Fluctuation in raw material supply such as sugar, glucose, and corn starch may impact itaconic acid market price trend. The addressable market relies on production cost for applications in which the chemical can be used as replacement. Other major chemicals which can be substituted includes sodium tripolyphosphate (in phosphate-free detergent builders’ production) and maleic anhydride (in UPR production).

Synthetic latex accounted for over 50% of the global itaconic acid market size, mainly employed in synthetic latex for polymer stabilization and is used in order to improve the final product quality i.e. SBR latex. As per industry estimates, the application expects stagnant growth. However, significant change would occur if a novel product enters the market.

Strong PMMA market growth forecast is likely to fuel itaconic acid demand in the production of MMA. The industry expects the segment to surpass USD 80 million valuation by 2024. The MMA demand is largely driven by new applications such as LCD screens, mobile phone screens, monitors, and video equipment. China remains to be great potential for the MMA.

Unsaturated polyester resins (UPR) which is mainly consumed in marine, construction, and transportation industries is foreseen to be an attractive potential application. Itaconic acid is a potential green chemical to substitute maleic anhydride in UPR production owing to its similar structure and has potential to be a good substitute.