Hydrogen peroxide market size was valued at around $4.8 billion in 2019 and will exhibit a growth rate of over 5.7% CAGR from the period of 2020 to 2026. The growing demand for pulp & paper across the globe coupled with the propelling product use in the HPPO process in propylene oxide production are major factor attributing to this growth. 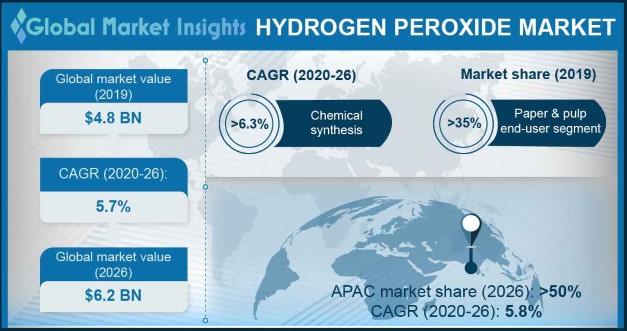 Hydrogen peroxide is a compound that has a combination of oxygen and hydrogen and is widely used across various industrial verticals. The compound possesses various properties such as antiseptic and efficient bleaching properties which makes them highly suitable in paper & pulp and the healthcare industry.

Hydrogen peroxide are also used for various personal hygiene and healthcare applications. It is used in the treatment of skin as an antiseptic for minor cuts and burns and as a mouth rinse solution for the removal of mucus and other mouth irritations.

Some of the niche applications hydrogen peroxide market include laundry, gardening, and others. Hydrogen peroxide is an excellent oxidizing agent and hence is widely used in deodorizing clothes and in the removal of stains. The product is an excellent low cost laundry bleach that can be used in all washable & die-stable fabrics.

The product like any other oxygen-based bleaches easily breaks down in water and is more environment friendly than chlorine bleaching agents. Moreover, hydrogen peroxide is effective solution against plant and protein-based stains in clothes.

The hydrogen peroxide market value is continuously growing due to its corresponding growth in its several end-user industries. The product consumption has witnessed a substantial increase over the past few years due to the growing demand from the chemical and wastewater treatment industry. The paper and pulp sector are major market for hydrogen peroxide and shall display a moderate growth rate over the forecast period.

The overall hydrogen peroxide market shall flourish in terms of revenue at a CAGR of over 5.5% over the forecast time span due to the growing awareness among end-user industries regarding its versatile properties of hydrogen peroxide along with being environment-friendly, as it breaks down into water and oxygen after the reaction.

Hydrogen peroxide is widely used for Propylene Oxide (HPPO) process, peracetic acid production, flame retardants, herbicide production, organic peroxide initiator, and various others. It is an indispensable part of the chemical industry, which is witnessing a tremendous growth past few years due to the increasing private sector involvement and geographical expansion by key contributors. However, health concerns for the exposure of H2O2 is anticipated to be a major downside to the growth of the hydrogen peroxide market share. 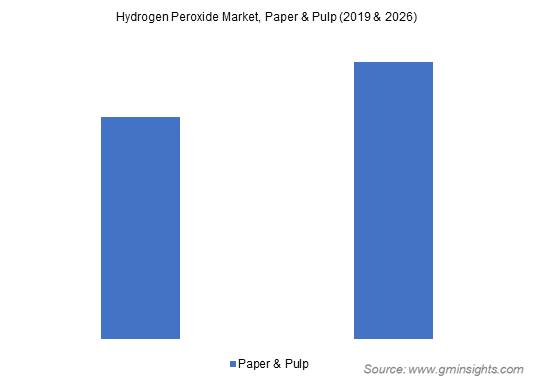 The paper and pulp sector is the biggest hydrogen peroxide market segment in terms of volume, accounting for over 35% of the total share in 2019. Hydrogen peroxide is used as a versatile bleaching agent in chemical pulp, mechanical pulp bleaching sequences, and in paper recycling with printed ink removal. It is one of the most important chemicals applied in multi-stage processes in bleaching of kraft pulp. Applications of H2O2 increase the brightness level of the paper by emanating low residue of halogenated compounds. It is applied as an exclusive bleaching agent in sulfite pulp brightening.

Mechanical pulp, which is derived from the conventional ground wood process is also bleached with H2O2 to very high brightness levels. It is used in combination with caustic soda for stabilization and buffering and as a chelant for sequestering of heavy metal trace in wood pulp.

In paper recycling, the removal of printing ink is most important when fibers are reused in the production of tissue grades or printing papers. Fiber brightening is done mainly with hydrogen peroxide. Small amounts of hydrogen peroxide are sufficient to improve the brightness and prevent alkaline yellowing. 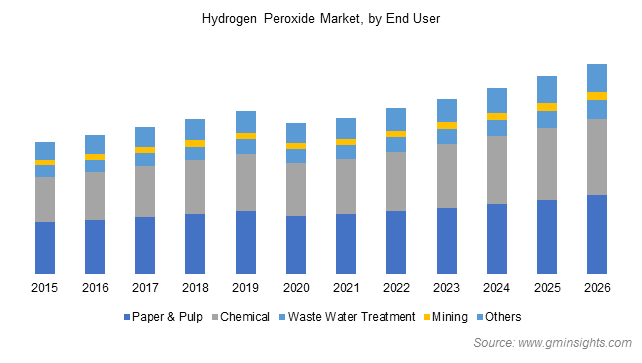 Chemical synthesis is another important application segment of hydrogen peroxide market, which shall grow at a prominent CAGR of over 6.3% during the assessment period. Hydrogen peroxide is economical as well as an environment-friendly oxidizing agent, which has found several applications in the chemical industry. Due to its low molecular weight, the product is an efficient oxidizing agent on a weight per weight basis. It offers the advantage of being soluble in water, organic solvents, or in the substrate itself. 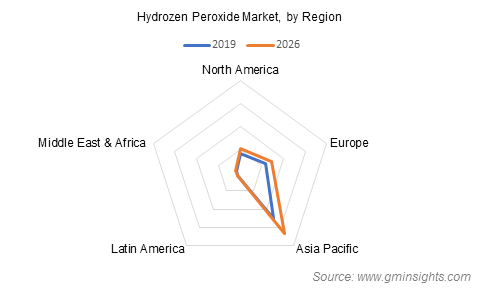 Asia Pacific was mainly led by China in 2019 and is anticipated to exhibit the same trend throughout the assessment period. Asia Pacific will hold a market share of over 50% in terms of revenue in 2026, with the highest growth rate of 5.8% from 2020 to 2026. Rising demand for hydrogen peroxide in paper & pulp and chemical businesses is substantially attributing to this growth.

Rapid industrialization and urbanization in countries including India and Indonesia, have driven the growth of the manufacturing sector that largely comprises chemical manufacturing and processing companies. Moreover, the increasing use of paper in hygiene tissue papers and food packaging is also likely to accelerate hydrogen peroxide market trends in paper and pulp processing over the forecast timeframe in this region. In addition, the growing HPPO plants in this region shall positively impact product market growth in this region for the projected timespan.

Hydrogen Peroxide market research report includes in-depth coverage of the industry with estimates & forecast in terms of volume in kilo tons & revenue in USD million from 2016 to 2026, for the following segments: