Hydrazine Hydrate Market size generated around USD 355.7 million in 2015 and is forecast to witness gains at CAGR of 4.9% to 2024. Rising demand of polymer foams in polymer industry will have a great influence on the product business throughout the forecast timeframe.

Its application in a wide range of products which includes food containers, foamed core pipes, vinyl sheets, and structural foam wood grain furniture will propel the hydrazine hydrate market growth. The global polymer foam market volume was recorded at over 2,000 kilo tons in 2015 and will have a decent growth at CAGR above 4% from 2016 to 2024. The growth in the end-user industries such as building & construction, packaging, automotive, and furniture & bedding industries will drive the market for polymer foams in the coming eight years. 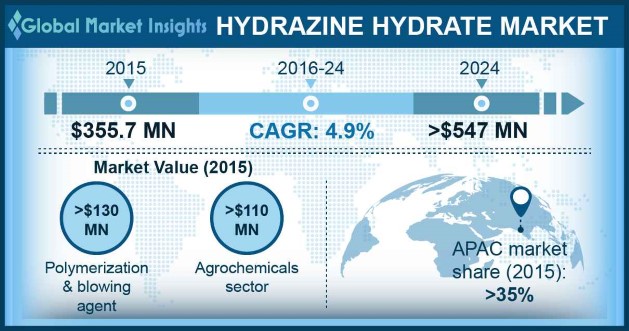 The growing need for agrochemicals owing to demand for better quality agricultural product for food and other purposes is another factor that will drive the global hydrazine hydrate market in next few years. Higher growth rate of the global population in comparison to the growth in arable lands is a matter of concern.

As per the World Bank, farmers all around the world need to increase their crop yield by almost 50% per hectare by the end of 2050. This will encourage the market for agrochemicals in the forecast period. The global agrochemical industry recorded a revenue of over USD 70 billion in 2015 and is anticipated to grow at a CAGR more than 6% from 2016 to 2024. The extensive use of hydrazine hydrate for manufacturing of several insecticides, pesticides and fungicides owing to its chemical nature will boost the hydrazine hydrate demand. Hydrazine also finds application in foliar treatment of potatoes to prevent them from sprouting during storage.

However, the toxic nature of the chemical will pose a threat to the market growth as a result of several environmental and industry usage norms imposed by OSHA and National Institute for Occupational Safety and Health (NIOSH), USA. Experimental results showing the carcinogenic properties of hydrazine hydrate will also restrain the market growth from 2016 to 2024. It has been classified as Group 2B by the International Agency for Research on Cancer (IARC). Furthermore, disposal of the wastes is also an environmental concern and is expected to hamper the hydrazine hydrate market growth in the forecast timeframe.

Polymer & blowing agents sector accounted for more than one-third of the global hydrazine hydrate market share in 2015. With growing demand of polymer products in several applications including automobile, electronic gadgets and other fields, the hydrazine hydrate used in polymers and blowing agents is likely to show a healthy growth from around USD 135,000 thousand in 2015 at around 5% CAGR from 2016 to 2024.

It was followed by the agrochemical sector which accounted for over 30% of the global market share owing to the growing global population and their nutritional needs. The increasing usage of insecticides, pesticides, and fungicides to enhance the crop growth will fuel the hydrazine hydrate market from 2016 to 2024. Global Agrochemicals was estimated at over USD 110,000 thousand in 2015, the majority of which was used in the Asia Pacific. 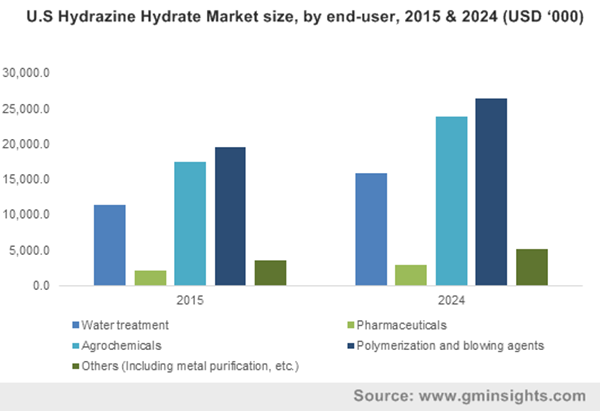 Asia Pacific, led by China, had the highest share of the global industry in 2015 accounting to over 50% of the total volume share. It is expected to have a firm growth throughout the forecast period. Increasing demand of hydrazine hydrate in polymer and agrochemical industries in China, India and certain South East Asian countries is expected to have a high influence in the coming eight years.

North America led the market till the late 1990s, but with stringent regulations owing to the health hazards and experimental trials on rodents, the growth rate started to reduce. It will have a slower growth rate in the forecast timeframe as compared to Asia Pacific, Latin America and Middle East & Africa. However, in terms of revenue, North America recorded over USD 60,000 thousand of the hydrazine hydrate market in all end-user industries in 2015.

The increasing demand of polymer products and mergers of corporates to increase the production capacity and meet the demand effectively is indicating a healthy growth in the hydrazine hydrate market from 2016 to 2024.

The hydrazine hydrate market research report includes in-depth coverage of the industry, with estimates & forecast in terms of volume in tons and revenue in USD from 2013 to 2024, for the following segments:

The above information has been provided on a regional basis for the following:

The market for hydrazine hydrate was valued at over USD 355 million in 2015 and will surpass 4.9% CAGR up to 2024, with increased use in structural foam wood, foamed core pipes, vinyl sheets and food containers.
Hydrazine hydrate industry share from the polymers & blowing agents sector will register nearly 5% CAGR through 2024 due to high demand of polymers from electronics, automotive and other industries.
APAC accounted for around 50% of the global volume in 2015 owing to the growth in hydrazine hydrate consumption across the agrochemicals and polymer industries in China, India as well as many Southeast Asian economies.
Nearly 30% of the global hydrazine hydrate demand was captured by agrochemicals sector due to the rising production of pesticides, insecticides and fungicides for improving crop yield.
Customize this Report
Inquiry Before Buying