Fuel Cell Market size valued at USD 3.5 billion in 2019 and the annual installation is anticipated to exceed 400 thousand units by 2026. Surging investments toward development of hydrogen infrastructure coupled with increasing demand for fuel cell electric vehicles will provide favorable opportunities for the market players. 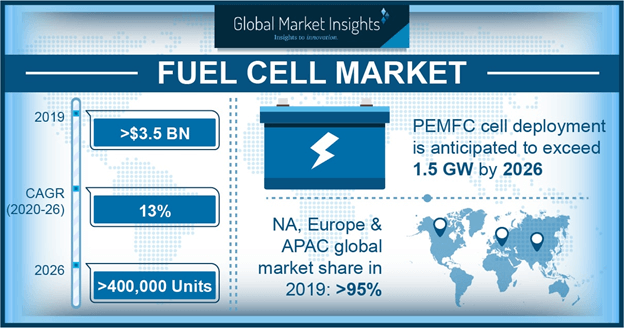 The high cost of cells, lack of proper infrastructure, hydration and storage are some of the major concerns associated with the product installation. Favorable government subsidies and norms toward adoption of renewable energy technologies and rising investments for electrification of off-grid and remote areas will augment the deployment of product globally.

PEMFC cell deployment is set to reach 1.5 GW by 2026. Increasing demand for reliable and uninterrupted electricity supply across remote and off-grid areas with growing sale for fuel cell electric vehicles (FCEV’s) will augment the market growth. Light weight, high efficiency, excellent dynamic and high-power density are some of the key features which will boost the product demand.

Accelerating demand for portable power sources in military applications, forklifts, commercial warehouses, consumer electronics and movable battery chargers is likely to spur the DMFC segment growth. DMFC uses polymer sheath as an electrolyte and platinum-ruthenium catalyst as an anode. The reaction between them separates hydrogen from liquid methanol and reduces the use of fuel reformer.

High energy density, comparatively low cost and wide temperature range are some of the key features which will support the product adoption.

Increasing adoption of fuel cell electric vehicles as an efficient alternative to conventional automobiles along with upsurge in investments toward research & development will enhance the demand across transport applications substantially. Wide use across light vehicles, ferries, forklifts, two & three vehicles, small boats, goods handling vehicles and trams will positively impact on the market revenue.

As per the DOE there were 6,500 fuel cell vehicles across the U.S. in 2019 when compared with 4,000 in 2015. Moreover, ongoing deployment of fuel cell in e-bikes, UAVs, and in numerous commercial vehicles will also complement the industry growth.

Increasing demand for electricity on account of rapid commercialization and industrial development is poised to spur the stationary fuel cell market expansion. Upsurge in demand for space heating across residential establishments, hospitals, telecommunication base stations, data centers, schools, hotels and tetra networks will positively influence the demand. However, growing need for large scale multi-megawatt units to provide electricity to remote and off-grid areas will propel the business growth.

Europe, North America and Asia Pacific collectively accounted for around 95% market share in 2019. Extensive research and development programs being undertaken by manufacturers along with ongoing funding by government organizations and private institutions including DOE, Credit Suisse, New Enterprise Associates and DAG Ventures has provided favorable opportunities for the market.

Rapid commercialization of Fuel Cell Electric Vehicles (FCEV) impelled by increasing consumer base and development of hydrogen fueling infrastructure has been a key strategic advantage for the development of fuel cell across APAC. Furthermore, major market players including Daimler and Hyundai are focusing towards the technological advancement in design and development of product has also led to more efficient and comparatively low-cost product across the regions.

The Asia Pacific fuel cell industry is projected to witness a substantial growth through 2026 led by rapid commercial area development coupled with growing energy demand. Increasing power consumption and government backed electrification programs across the emerging economies to drive the market growth. The ongoing investments by industry players including Hyundai toward the development of hydrogen infrastructure will complement the market outlook.

The leading industry participants are focusing toward strategic alliance and public-private partnerships with various companies as a part of their key strategy outlook. In addition, increasing funding and extensive research & development activities have led to an increase in the profitability landscape of these players and enhanced their business presence.

The market research report for fuel cell includes in-depth coverage of the industry with estimates & forecast in terms of “Units”, “MW” and “USD” from 2015 to 2026, for the following segments: