Erdosteine Market size surpassed USD 90 million in 2018 and may expect consumption of over 1.2 kilo tons by 2025. 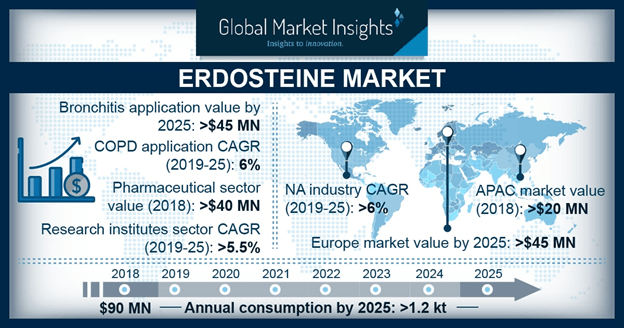 Increasing smoking trends in various delivery forms such as regular cigarettes, vaporisers & electronic cigarettes owing to stressed lifestyles may stimulate erdosteine market size. Regular smoking habits cause outbreaks of common respiratory diseases such as smoker’s cough & bronchitis which leads to mucus thickening as it acts a barrier against allergens and bacteria causing congestions. In 2017, an estimated 14% of the U.S. adults were current cigarette smokers out of which 75% smoked every day. Smoking causes COPD which damages air sacs, airways, and the lining of lungs. Growing usage of tobacco in the age group of 18 to 24 years which accounted for around 16.5% in 2017 which in turn drive the young crowd to try these products. Furthermore, 16 million Americans are diagnosed with COPD and is the leading cause of death in the U.S. Erdosteine improves oxidative stress as it decreases viscoelastic properties and bacterial adhesion to the cell membrane, and a scavenging effect on free oxidant radicals, thereby fuelling the product demand.

Increase in respiratory disease is attributed to the increase in air pollution. People breathing poor air can have coughs and asthma symptoms. Exposure to polluted air directly leads to the development of medical conditions which includes bronchitis, respiratory infections, heart diseases, cancer and strokes. In the EU over 430,000 people die every year prematurely as a result of breathing polluted air. Mucolytic medicines aid in treating symptoms of acute flare ups in diseases such as asthma & chronic bronchitis. Erdosteine is used in manufacturing various pharmaceutical drug to avert these diseases caused by pollution. These drugs also improve lung function owing to its antioxidant and anti-inflammatory properties.

Erdosteine market size from chronic obstructive pulmonary disease (COPD) application may register gains close to 6% up to 2025. Increase in air pollution owing to rise in manufacturing & automobile sector will boost market growth. Rise in air contaminants reduces the elastase inhibitory capacity in lungs and promotes pathogenic bases propagation which is the major cause for COPD such as emphysema and refractory asthma. Rising cases of immunosuppressed individuals owing to allergies will increase the risk of common respiratory problems such as common cold & nasopharyngitis which in turn may accelerate the overall market size.

Erdosteine Market, By End Use

Erdosteine market demand from pharmaceutical sector was valued at over USD 40 million in 2018. Increasing respiratory diseases cases owing to rise in air contaminants such as particulate matter, nitrogen oxides, sulphur oxides, nitrates, ground level ozone, volatile organic compounds, and carbon mono oxides will boost the industry. These contaminants increase the risk of bacterial infections which triggers excessive mucus production thus causing severe congestions and respiratory problems. Erdosteine is available in sachet, suspension, capsule and dispersible tablet forms which has benefitted the healthcare authorities and companies for the effective diagnosis and prevention of COPD and bronchitis. Increasing aging population and the rising number of individuals diagnosed with the chronic illnesses such as cardiac disorders, diabetes, and respiratory diseases may boost the pharmaceutical market.

Research institutes end-use segment may grow significantly at over 5.5% over the forecast timeframe. Rise in technological and medical research trends across top universities in the U.S. and Europe such as John Hopkins Medical School, Harvard Medical School, Cambridge School of Clinical Studies and Columbia University will stimulate the overall market share. Various clinical studies across labs are underway to substantiate the efficacy for mucolytic based drugs in various respiratory and cardiovascular diseases. Increase in private & government funding across various medical research segments will stimulate the market growth.

North America, driven by Canada and the U.S. erdosteine market size may register significant growth over 6% up to 2025. Growing consumer consciousness towards clinical efficacy and low side effect characteristics of medicines may drive regional market. Favourable regulation by FDA regarding organ drug approval and its usage for treating various COPD’s such as refractory bronchitis and emphysema is likely to drive industry growth.

Europe driven by UK, France, and Germany erdosteine industry demand may surpass USD 45 million by 2025. Increasing geriatric population and extreme winter temperatures will boost the overall market in the region. Extreme winters in Europe and rising cases of weak immune systems will increase the prevalence of common cold. EU Commission adopted regulations regarding clinical efficacy and safety of mucolytic drugs before authorizing in the market.

Asia Pacific led by India, Japan, and China market size was valued at over USD 20 million in 2018. Rapid industrialization, population growth and increase in smoking trends owing to sedentary lifestyles will boost the regional market demand for respiratory drugs. Rising asthma & bronchitis cases owing to increase in pollution level of metropolitan cities from vehicle and factory smoke in India and China will increase cheap & over the counter drugs demand owing to its anti-inflammatory and free radical scavenging properties.