Electric Household Appliances Market size surpassed USD 350 billion in 2016 and is poised to witness over 8% CAGR till 2024. The global industry shipments were over 600 million units and are set to cross 1 billion units by 2024.

The market demand is driven by growth of organized retail sector coupled with need for modernized appliances across APAC region. The increasing demand for air conditioners, refrigerators, and washing machines, can be attributed to improving living standards and increasing number of households across the globe. 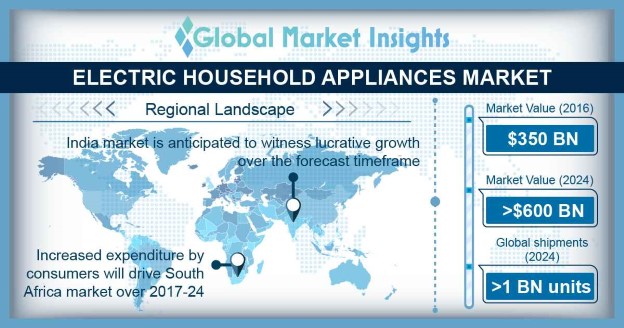 Major appliances, such as washing machines, refrigerators, and air conditioners, have continued to sustain robust demand in APAC on account of high consumer demand. As regional economies are advancing, consumers have started utilizing modernized devices and adopting technologies to improve the household.

The low-level adoption is translating to an untapped potential for the market players. Steady growth is predicted in the developing markets while rural regions are set to outdo the trends due to improving lifestyles and rising purchasing power.

The active participation from government organizations will provide significant opportunities for the industry participants. The economic downturn and poor export performances are anticipated to inhibit the electric household appliances market growth.

The air conditioners product segment is anticipated to rise during the forecast period impelled by rising temperatures and increasing income levels of the middle-class population. The construction activities followed by the improving living standards of the people will provide opportunities for the segment growth.

The cooking appliances segment is gaining popularity owing to increasing disposable incomes and lifestyle changes of consumers, reducing the price gap amongst the products offered by various companies. The cooking appliances consist of small products, such as coffeemakers, food processors, blenders, which are generally designed for countertops. These are less expensive and are used for specialty purposes.

India market is expected to witness a signficant demand through 2024 led by increasing disposable incomes and a significant rise in the demand in rural areas. In addition, government initiatives and the presence of a number of companies in India have also fueled the industry growth.

Government initiatives, such as Make in India campaigns, have caused many manufacturers to boost their local production capacity and set up new production facilities in the country. Furthermore, the increase in working women population has contributed to rise in the demand for electric cooking appliances and automatic washing machines.

The trend of increased spending of consumers is expected to drive the South Africa electric household appliances market revenue. South Africa is leading its regional counterparts in terms of cropping up of manufacturing centers.

Vicinity to Indian and Atlantic oceans, large population, and cheap labor are attracting several manufacturers from Europe and Asia Pacific. This is expected to reduce the cost of products, thus propelling the demand further. After catering to Asia Pacific markets, the technology product firms are now shifting their bases to Africa. Additionally, declining poverty levels are further driving the market in the region.

Industry players include LG, Samsung, Electrolux, Whirlpool Corporation, Siemens AG, Walton Group, etc. Due to increasing demand for energy-efficient products, these industry participants are actively developing devices with more features such as temperature detection. R&D activities are also quite prevalent throughout the market.

Various programs, such as the home energy action program, are being undertaken by the government bodies to deliver energy-efficient devices to low-income households. With countries directed toward minimizing the carbon emissions levels, several programs and policies are boosting innovations in product development efforts.

The market research report on electric household appliances includes in-depth coverage of the industry with estimates & forecast in terms of revenue in USD and volume in units from 2013 to 2024, for the following segments: