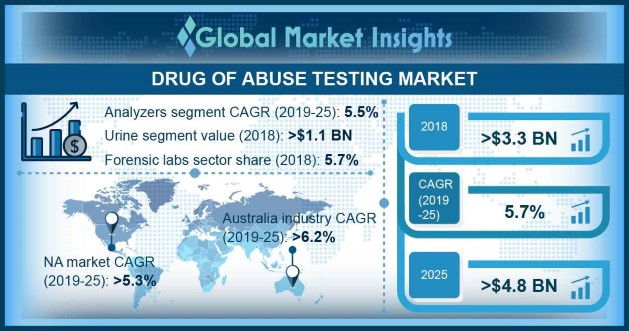 Drugs of abuse are chemicals that generally produce specific effects in the user’s brain, mainly in reward circuitry of brain. In general, drugs of abuse either produce good feelings or relieve bad feelings within seconds to minutes after administration. Drugs can be administered by various routes such as inhalation, oral ingestion, oral absorption, subcutaneous, intravenous or intramuscular injection, and others. Generally, drug tests do not detect drug use. Instead, drug tests identify specific drug classes or drugs in biological matrices that are represented in particular test panels. Drugs can be detected using any sample, the most common samples for usual testing purposes include blood, urine, hair, oral fluid, nails, breath and sweat.

Drug testing was widely used in the U.S. in 1950s in hospital emergency rooms to rapidly diagnose and treat patients with drug overdose. With the development of thin layer chromatography, testing for drugs of abuse with urine sample became feasible in large populations. In 1970s, the development of automated immunoassay technologies conducted in laboratories allowed large scale urine drug testing in the criminal justice system and addiction treatment. Immunoassay was the first drug testing technology to be automated. In 1980s, in context of the cocaine epidemic, drug testing became widespread in the civilian workforce to discourage drug use that could impair workforce safety and productivity.

Furthermore, in the 21st century, testing of drugs became increasingly widespread. The drug testing was added to alcohol testing for drivers arrested for being impaired and involved in serious accidents. Presently, testing for drugs of abuse in medical practice is rapidly growing in the area of pain management. This is majorly due to the increased use of opioids to treat chronic pain as well as morbidity and mortality related to the misuse of these drugs.

Favourable regulatory scenario in developed economies for drug of abuse tests will propel the overall business demand. For instance, FDA regulates drugs of abuse tests that are sold to healthcare professionals and consumers in the U.S. Also, it reviews several tests to avoid inaccuracy in results, thereby accelerating the drug of abuse testing market growth. Evaluation of performance, design of tests and sample collection systems to ensure precise results further fosters huge demand for these tests and systems. Additionally, FDA also reviews the test instructions and package inserts to safeguard test specificity and accuracy. Hence, above mentioned aspects should augment the drug of abuse testing industry growth.

However, dearth of trained laboratory professionals may hinder the drug of abuse testing market growth over forthcoming years.

The product segment covers analyzers, rapid testing devices, and consumables. Analyzers segment will witness around 5.5% CAGR over the analysis period. Analyzers are further fragmented into breath, immunoassay and chromatographic analyzers. Increasing adoption of breath analysers for detecting drug consumption coupled with technological advancement will drive the segmental growth. The launch of technologically advanced devices including COBAS INTEGRA in the industry has improved patient’s convenience. Additionally, manufacturers are aiming at improving drug detection devices, as it provides precise and quick results in the minimum amount of time will positively impact the industry expansion.

Sample segment is divided into urine, saliva, hair and others. Urine segment accounted for over USD 1.1 billion in 2018. Urine test is considered as the most common form of alcohol and drug testing. It may be performed as part of pre-employment screening, especially for employees in certain occupations. Presently, urinalysis is the least invasive and legally acceptable form of drug testing. Urine test result shows the absence or presence of drug metabolites in a person’s urine. Drugs that are generally screened in a urine drug test include cocaine, marijuana, amphetamines, methamphetamines, opiates, and others. Quest Diagnostics, Alere, and CRL are some of the largest clinical testing laboratories in the U.S. that provides urine collection services for several major businesses globally. 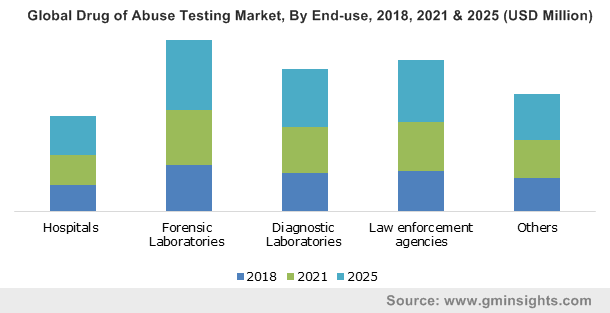 U.S. market accounted for over 0.9 billion in 2018. According to the WHO, drug overdose is one of the major causes of death that will surge huge demand for analyzers and rapid testing devices in the country. For instance, in 2017, around 70,237 deaths were accounted due to drug overdose in the U.S. Several such factors will thereby augment the market growth over the coming years. Thus, the U.S. government has established its own platform for hosting several drug of abuse challenges for better patient care.

The drug of abuse testing market research report includes an in-depth coverage of the industry with estimates & forecast in terms of revenue in USD from 2014 to 2025, for the following segments: