Deep Brain Stimulation Devices Market size surpassed USD 1.1 billion in 2021 and is expected to witness 14.1% CAGR through 2022 to 2030, driven by the increasing demand for minimally invasive surgical procedures and rising geriatric population. As technology continues to progress, overall treatment efficacy will also continue to improve. 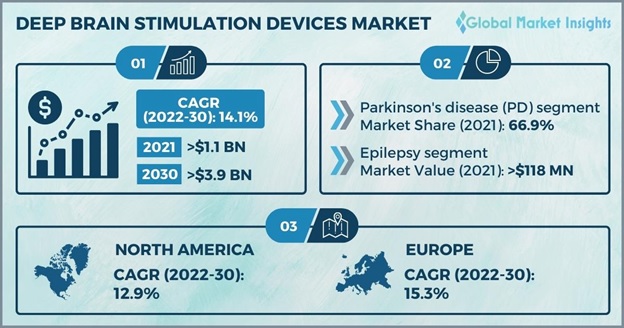 Deep brain stimulation devices are used to provide treatment for movement disorders associated with Parkinsons disease (PD), dystonia, essential tremor, and other neurological disorders. This technique is gaining popularity as an effective treatment modality, especially in conditions that cannot be treated with medications alone.

Deep brain stimulation technique has been approved by the U.S. FDA (Food and Drug Association) for treatment of Parkinsons disease (PD), obsessive-compulsive disorder, dystonia, and epilepsy, which enhances its overall industry demand. While the impact of COVID-19 has mostly been negative in several sectors, the market witnessed a moderately negative impact. Due to the increasing number of COVID-19 cases, lockdown and limited access to hospitals, and fewer patient visits, industry revenues have been impacted adversely.

For instance, according to the World Health Organization (WHO), key facts 2022, around 50 million individuals across the globe have been affected by epilepsy. Similarly, approximately 5 million people are diagnosed with epilepsy each year globally. In low to middle-income countries around 139 per 100,000 people are diagnosed with epilepsy each year, this figure is estimated to be 49 per 100,000 people in high-income countries. A large number of people and families across several parts of the world suffer from epilepsy, which further creates conditions conducive for industry’s expansion.

Moreover, according to the U.S. CDC (Centers for Disease Control and Prevention), nearly 5.8 million Americans were identified to be suffering from Alzheimer’s disease in 2020 and this figure is projected to increase to 14 million by 2060. This trend is slated to generate a robust demand pool for deep brain stimulation techniques, bolstering the overall market outlook further, as it is a fast-developing field offering successful treatment for neurological disorders. Apart from a growing demand pool, failure in medications, due to severe side effects that outweigh benefits, is making deep brain stimulation a procedure of choice among patients.

Increasing incidence of Parkinson’s disease will foster the market statistics

Based on application, the Parkinson's disease (PD) segment is expected to foresee notable gains. The disease is a neurological disorder that causes difficulty in walking, shaking, stiffness, coordinating as well as balancing. Symptoms of Parkinson's typically appear gradually and worsen as time passes. People may have difficulty talking and walking as the disease progresses. The Parkinson's disease segment accounted for around 66.9% of the market share in 2021, and the trend will continue to build momentum in coming future owing to the rising number of cases.

According to the Parkinson’s Foundation, every year more than 10 million people worldwide are diagnosed with PD. Around one million individuals in the U.S. are living with Parkinson's disease, and this number is expected to rise to 1.2 million by 2030. Consequently, due to large population suffering from this disease, the demand for deep brain stimulation devices is also on the rise in the market. 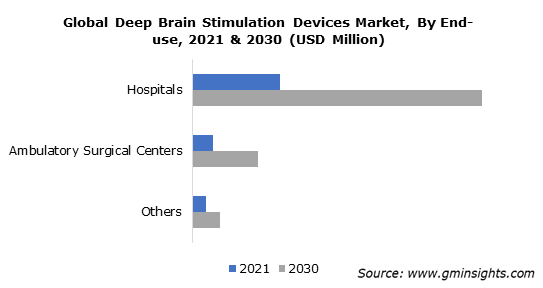 With respect to end-use, the market is divided into hospitals, ambulatory surgical centers, and others. Among them, the hospitals segment accounted for over USD 906 million in 2021 owing to the rising prevalence of various neurological conditions that can be treated effectively by under-skilled healthcare professionals in hospital settings.

Similarly, availability of better treatment facilities and advanced deep brain stimulation devices is a key reason that is driving patients to seek neurological treatment at hospitals. Hospitals also employ the highest-quality of professional staff, including experienced and skilled neurologists, nurses, and technicians that collaborate to give patients the best surgical care in a pleasant environment that further secures the market progression.

North America deep brain stimulation devices market share is expected to grow at a 12.9% CAGR across the projected timeframe. Increasing occurrence of neurological disorders, high R&D expenditure, product approvals from the US Food and Drug Administration (FDA), and technological advancements are major factors that accelerate market progress in North America.

For instance, in 2021 researchers at the MIT (Massachusetts Institute of Technology) developed a method to stimulate deep cells in the brain using multiple electric fields. This method has been shown to selectively stimulate deep brain cells without affecting the activity of overlying structures. Such ongoing technological advancements in the deep brain stimulation devices market, along with other factors such as availability of advanced infrastructure across the region and favorable medical insurance policies, are proving beneficial to market.

The deep brain stimulation devices market report includes in-depth coverage of the industry with estimates & forecast, in terms of revenue in USD from 2022 to 2030, for the following segments:

Rising geriatric population and the subsequent growth in the occurrence of neurological disorders across the globe will foster deep brain stimulation devices market size by 2030.
Parkinson's disease, which affects more than 10 million people globally, is expected to emerge as a major determinant fueling DBS devices adoption across the world.
The hospitals end-use segment accounted for over USD 906 million in 2021; driven by the increasing number of patients preferring hospitals due to their better treatment facilities, the segment is slated to witness notable gains by 2030.
Driven by increasing neurological disorders, rising product approvals from the FDA, high R&D expenditure, and technological advancements, the North America DBS devices market would emerge as a key regional growth ground for the overall market.
Customize this Report
Inquiry Before Buying