Cardiac Ablation Market size was valued at more than 3 billion in 2021 and is poised to progress at a CAGR of over 14.2% CAGR between 2022 and 2030 owing to the growing technological advancements coupled with rising demand for minimally invasive procedures globally. 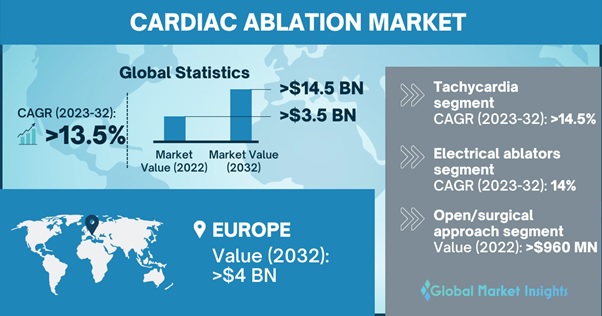 Increasing elderly population base across the world is further boosting the market size growth. According to the World Health Organization (WHO), 1 in 6 people in the world will be over 65 years of age by 2050. Thus, aforementioned factors will boost the cardiac ablation market share during the forecast period.

The COVID-19 pandemic negatively impacted the cardiac ablation industry. The setback occurred owing to stringent lockdown regulations imposed by authorities as well as disturbances experienced in manufacturing and supply-chain operations during the pandemic period. Moreover, the increased risk of hospital-acquired infections further restricted the growth of the market.

The process of scarring the tissue of the heart to block irregular heart signals is called cardiac ablation. Cardiac ablation is usually performed to treat rhythm problems of the heart also known as arrhythmias. The procedure involves threading of long flexible tubes/catheters through the blood vessels of the heart.

An increase in elderly population base across the globe is boosting the cardiac ablation market growth. According to the National Library of Medicine, elderly people aged over 80 years are more prone to suffer from atrial fibrillation (AFib), which is one of the most common types of arrhythmias. Moreover, as per the Centres for Disease Control and Prevention estimates, nearly 12.1 million people in the U.S. will suffer from AFib by 2030. Thus, rising geriatric population base coupled with escalating number of atrial fibrillation cases will generate lucrative opportunities for market development.

The cardiac ablation market by product is segmented into radiofrequency (RF) ablators, electrical ablators, cryoablation devices, ultrasound ablators, and others. The radiofrequency (RF) ablators segment accounted for a largest market share of more than 40.5% in 2021 and to witness significant growth over the coming years owing high adoption rate due to various advantages such as cost effectiveness, better efficiency, and ease-of-use related to this type of devices.

Based on approach, the industry is subdivided into catheter-based and open/surgical. The catheter-based segment held a revenue of about USD 2.5 billion in 2021. The increasing prevalence of atrial fibrillation is the major factor driving the segmental expansion.

According to the European Heart Journal, nearly 12 million people are estimated to suffer from arrhythmia in the U.S. by the year 2050 and around 17.9 million in Europe by 2060. Moreover, as compared to open-heart surgeries, catheter-based surgeries offer faster recovery and limited complications such as bleeding and infection. 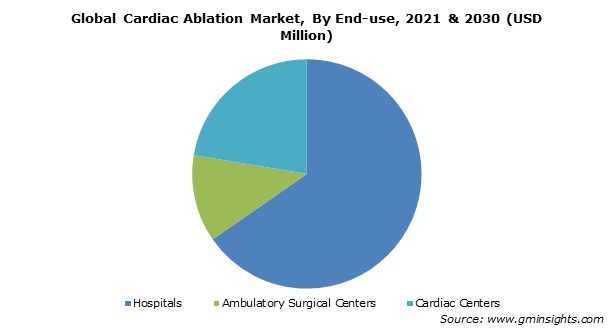 Cardiac ablation market by end-use is segmented into hospitals, ambulatory surgical centers, cardiac centers, and others. The hospitals segment held a largest revenue share of about USD 1.5 billion in 2021 and is anticipated to witness substantial growth during the forecast period. The healthcare expenditure has increased phenomenally over the recent years. Moreover, technological advancements in minimally invasive surgeries coupled with rising number of people opting for surgeries is further driving the segmental growth.

Innovative product launches in cardiac ablation industry will increase the demand for these devices by hospitals, thereby, boosting the product demand. For instance, in January 2021, Medtronic announced the U.S. Food and Drug Administration (FDA) approval for its DiamondTemp Ablation (DTA) system intended to use for the treatment of atrial fibrillation. The strategy helped the company to strengthen its product offerings, thus generating more revenue especially from the hospital segment.

According to the National Institute of Environmental Health Sciences, the probability of suffering from chronic disease drastically increases with age. The increasing number of people suffering from heart diseases in North America will further add to market growth. For instance, as per the Centres for Disease Control and Prevention (CDC) data, more than 650,000 people in the U.S. die due to cardiac disease annually.

The cardiac ablation market report includes an in-depth coverage of the industry with estimates & forecast in terms of revenue in USD from 2017 to 2030 for the following segments:

The global cardiac ablation industry size was valued at over 3 billion in 2021 and is anticipated to surpass USD 11.2 billion by 2030 due to the rise in technological advancements and the growing demand for minimally invasive procedures globally.
The radiofrequency (RF) ablators product segment held close to 40.5% of the cardiac ablation market share in 2021 and will grow with rising adoption to offer cost-effectiveness, better efficiency, and ease of use.
The cardiac ablation industry share from the catheter-based approach segment was valued at over USD 2.5 billion in 2021 owing to the higher prevalence of atrial fibrillation.
North America accounted for over 42% of the cardiac ablation industry share in 2021 and will see expansion with the strong presence of key market players, favorable reimbursement scenarios, and the increasing number of medical centers in the region.
Customize this Report
Inquiry Before Buying