Extracorporeal Membrane Oxygenation Market size crossed USD 540 million in 2021 and is set to register over 2% CAGR between 2022 and 2030. Growing adoption of unhealthy habits such as excessive smoking, tobacco consumption, and alcohol consumption contribute to the existing burden of lung diseases, fuelling the global market demand. 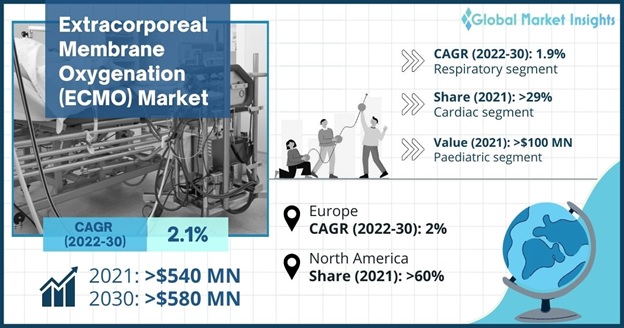 A large patient population base is suffering from lung and heart diseases in highly populated countries such as China and India. This is expected to offer numerous industry growth opportunities in these countries. According to the latest data published by the World health organization in 2020, around 10% of the total deaths in India is caused by lung disease. Thus, an increasing number of patients suffering from pulmonary disorders will lead to the growing adoption of advanced ECMO devices.

Aforementioned factors will contribute to overall industry growth. Increasing use of ECMO in hypertension-related cardiac stroke, SCAs, and other chronic vascular diseases will further accelerate the market expansion.

The pandemic positively impacted the extracorporeal membrane oxygenation market growth. Sudden increase in COVID-19 cases across the globe during the initial period of 2021 resulted in continued requirement of extra life support. The weakened respiratory health owing to lung infection and long-term symptoms lead to an increased risk of respiratory failure, thereby creating the need for ECMO devices during pandemic.

Additionally, veno-venous extracorporeal membrane oxygenation (VV ECMO) has been used as a life-saving therapy for COVID-19 patients. Thus, the continued surge in COVID-19 patients led to an increase in demand for ECMO devices globally.

Extracorporeal membrane oxygenation is also known as extracorporeal life support. It is a life-supporting system that provides respiratory and cardiac support to the patients suffering from severe respiratory failure.

Increasing awareness among patients regarding the importance of cardiopulmonary assistance for severe cardiac and respiratory conditions will accelerate the adoption rate of ECMO therapy. The introduction of patient awareness programs regarding ECMO device and its application in emerging economies has resulted in surge in its demand.

For instance, the Latina Preventive Heart Disease (LPHD) program was introduced in Latin America with an aim to spread awareness regarding advanced therapies and instruments for CVD diseases. Such initiatives helped ECMO industry to flourish in this region. Moreover, during the pandemic, ECMO machines were used to treat critical COVID-19 patients creating awareness about the device globally. Thus, growing awareness and patient education about ECMO will positively impact the market dynamics.

Based on modality, the extracorporeal membrane oxygenation market is segmented as veno-arterial (VA), veno-venous (VV), and arteriovenous (AV). The veno-venous (VV) segment was valued at USD 200 million in 2021. Veno-venous ECMO device improves the oxygen level and creates proper blood flow while reducing cardiac effort and providing hemodynamic support. With the increasing burden of cardiopulmonary illnesses, demand for veno-venous ECMO modality is expected to boost in upcoming years. Moreover, continued developments in veno-venous modality will further aid the segmental growth by providing effective therapy. The advantages of these devices, such as decreased rate of recirculation, ease of mobilization, and lesser danger of bleeding, will further fuelling the overall market statistics.

The respiratory segment is estimated to witness over 1.9% CAGR during the forecast period. The risk of respiratory failure among patients suffering from various respiratory disorders is a major contributor to segment’s growth. Further, increased tobacco consumption and smoking affects lung health and lead to sudden respiratory failure or chronic diseases.

Expanding geriatric population base prone to suffer from respiratory illnesses is said to stimulate the demand for respiratory treatment significantly over the upcoming period. Thus, increasing in disease burden will impel the product adoption rate over the forthcoming years.

The extracorporeal membrane oxygenation market based on patient population is segregated into infant, paediatric, and adult. The paediatric segment was valued at over USD 100 million in 2021. The ECMO device is used to treat diverse types of diseases in children, including meconium aspiration syndrome, pneumonia, congenital diaphragmatic hernia (CDH), and respiratory distress syndrome (RDS).

According to the Extracorporeal Life Support Organization (ELSO) registry, more than 33,000 paediatric patients received ECMO support internationally in 2021. Thus, increase in prevalence of chronic and infectious diseases among pediatric population will accelerate the segmental growth in upcoming years.

North America region held more than 60% market share in 2021. The increasing prevalence of cardiopulmonary disorders, adoption of unhealthy habits including tobacco consumption, and smoking, coupled with expanding geriatric population base in the region are major factors contributing to the regional market expansion.

Moreover, in 2020, pandemic became the leading cause of death for the population aged between 45 to 84 years. The ECMO machine replaces the function of lungs and/or heart, thereby allowing these critically ill adult patients to recover faster. Therefore, the increasing number of critically ill patients coupled with growing usage of ECMO machine will boost the regional market statistics.

The extracorporeal membrane oxygenation (ECMO) market research report includes in-depth coverage of the industry with estimates & forecasts in terms of revenue in USD from 2017 to 2030 for the following segments:

Global extracorporeal membrane oxygenation (ECMO) market size was valued at more than USD 540 million in 2021 and is predicted to record over 2% CAGR during the forecast period of 2022-2030.
Global ECMO industry size from respiratory applications will observe over 1.9% CAGR through 2030 because patients diagnosed with lung diseases are at a higher risk of suffering from respiratory failure.
Global ECMO market share from the pediatric segment was valued at over USD 100 million in 2021 because these devices can treat a wide range of diseases in children, such as pneumonia, meconium aspiration syndrome, congenital diaphragmatic hernia (CDH), and respiratory distress syndrome (RDS).
Braile Biomedica, Fresenius Medical Care AG & Co. KGaA, Abbott Laboratories, Abiomed, Edwards Lifesciences Corporation, Getinge AB, Eurosets, and Nipro, among many others, are the top manufacturers of ECMO instruments.
Customize this Report
Inquiry Before Buying