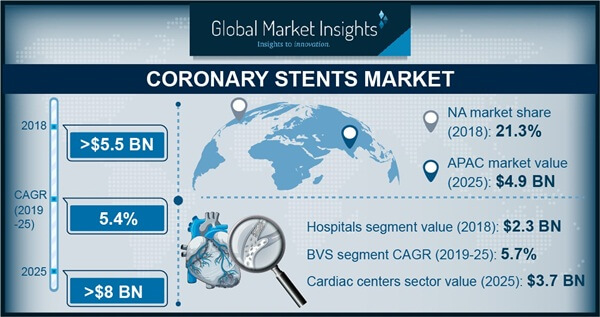 A coronary stent is a small, mesh-like metal tube that expands in the coronary arteries. The stent is used to open a blocked or narrowed blood vessel that supplies oxygenated blood to the heart. These stents are inserted into the clogged or narrowed artery and then expanded with the help of a balloon catheter to open coronary arteries and lower the chances of heart attack. As per the clinical guidelines, patients with more than 70% of the artery blockage are only eligible for coronary stents.

Coronary stents were used for percutaneous coronary intervention since the late 1980’s. Numerous upgradations have been incorporated to improve the treatment outcome after the introduction of first coronary stent. With introduction of drug eluting stents, the limitations of conventional bare metal stents were resolved. Companies are currently involved in numerous clinical trials to study the treatment outcome of novel stents that are bioresorbable. Also, changing government policies to reduce the prices of coronary stents to offer affordable treatment options to the patients will boost industry expansion.

Pervasiveness of coronary artery diseases (CAD) and rising demand for percutaneous coronary intervention (PCI) procedures will propel cardiovascular stents business growth. Major causes of CAD include adoption of unhealthy diet and sedentary lifestyle. For instance, between 1990 and 2016, the death rate due to cardiovascular disorders in India rose by 34%. Growing prevalence of CVD will lead to high adoption rate of coronary stents during PCI procedures. Also, with advancements in the treatment outcome of PCI procedures due to development of advanced stents, the market is estimated to show positive growth trajectory in the future.

However, product recall due to safety issues along with few post-surgery complications will limit the market growth. Also, dearth of skilled healthcare personnel and infrastructure in developing economies will further limit market growth.

Drug eluting stents are the most preferred coronary stents 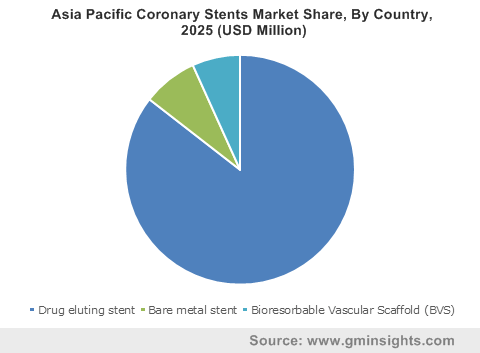 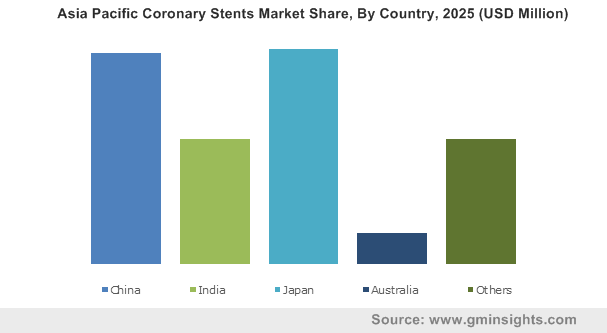 North America coronary stents market accounted for revenue share of 21.3% in 2018. The major growth driving factors are favorable reimbursement policies along with launch of technologically advanced products. Majority of the companies are focusing on launch of next generation of coronary stents to meet the growing demand of the patient population. Furthermore, increasing demand of minimally invasive surgical procedures will further assist in driving the market growth.

Novel product approvals in Europe and the U.S. will drive market growth

Major companies in the coronary stents market include Abbott, Terumo, B Braun, Medtronic and Boston Scientific Corporation. New product launch, collaborations, acquisitions and mergers are few of the strategies adopted by these players to capture high revenue share in coronary stents industry.

Coronary stents market research report includes an in-depth coverage of the industry with estimates & forecast in terms of revenue in USD from 2014 to 2025, for the following segments: