Clear brine fluids market size exceeded USD 1.1 billion in 2018 and will grow at a CAGR of 6.3% from 2019 to 2026. Increasing product usage owing to its suitable physiochemical properties in the oil and gas industry across the globe will primarily augment the market share over the forecast timeframe.

Proliferating oil and gas sector accompanied with increasing drilling rigs for gas extraction will significantly drive the industry expansion. Oil and gas manufactures focus on increasing their production capacities to cope up with the rising consumer requirement that will propel clear brine fluids market share. 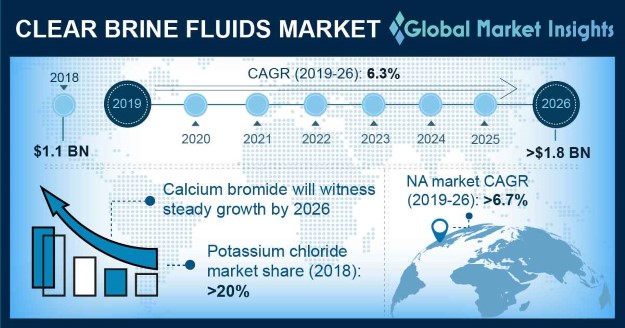 Clear brine fluids are salt-based solutions that find applications in completion processes and drilling operations for petroleum and gas sector. It also aids to control high-temperature and high-pressure in the reservoir during conventional drilling processes further reducing the damage and hazards. Key raw materials including sodium, calcium, cesium, chlorine, potassium, and bromine are used in the manufacture of multiple types of clear brine fluids.

Depleting natural gas and crude oil sources are forcing companies to increase their focus towards alternative sources of energy that will support the product share over the projected timeframe. Industry players involve in developing energy products from unconventional resources including shale gas/oil, gas hydrates, coal bed methane and tight gas sands. The product requirement for the extraction of such sources from the reserves will accentuate the volume share.

Increasing consumer preference and rising production of shale gas in the countries including the U.S., China and Argentina will positively influence the oil and gas industry size. For instance, according to U.S. Energy Information Administration, in 2017, the shale gas production registered over 18,589 Billion Cubic Feet as compared to 17,032 Billion Cubic Feet in 2016. Proliferating exploration activities of shale gas reserves in countries including UK and Canada will considerably stimulate the clear brine fluids market. 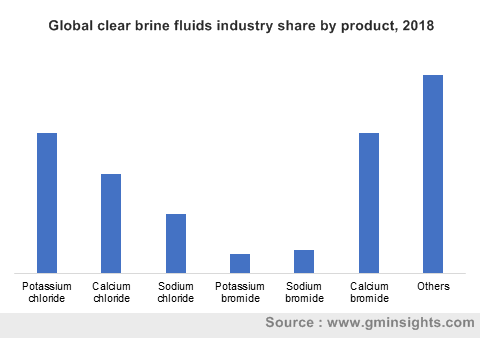 Potassium chloride accounted for over 20% share in 2018 owing to the increased application in oil and gas sector. These brines are widely used in the drilling and completion process for stabilization of water-sensitive shale/clays from high pressure developed in the reservoirs. They also serve as an economical source of potassium for inhibitive water-based completion and drilling fluids. Increasing investments for gas exploration in countries with adequate reserves will further escalate the product size.

Calcium chloride will register for considerable share in the market owing to the high requirement of workover fluids and completion fluids for drilling operations. The product is majorly preferred for industrial use owing to the increased cost effectivity as compared to the alternative brine fluids. Calcium chloride is majorly used in workover operations and oilfield completion in the oil and gas sector. The inhibitive properties of calcium chloride in clear brine fluids for inhibit clay swelling, migration and hydration of swelling clays will support the product size.

Calcium bromide will witness steady growth in the clear brine fluids market share owing to the density range from 8.4 lb/gal to 15.2 lb/gal suitable for improved operations in drilling rigs. Increased resistance to the formation of chloride ion will stimulate its application in oil and gas industry. Calcium bromide-based brine fluids are employed as a workover, completion, packer, or spike fluid in several applications for drilling. The fluid is extensively used for reducing formation damage due to clay swelling and dispersion that will accentuate the product share over the forecast timeframe. 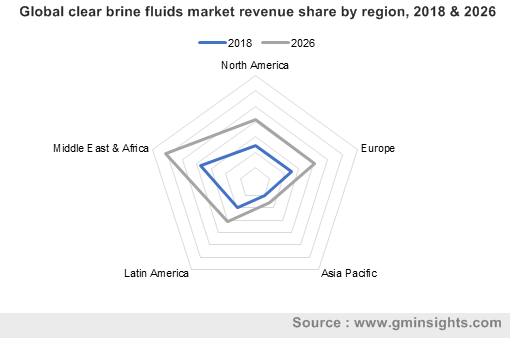 Middle East and Africa accounted for a significant share owing to several crude oil reserves in the countries including Saudi Arabia, Iran and Kuwait. Presence of major oil companies including Saudi Aramco, Arabian American Oil Company and Exxon Saudi Arabia will escalate the industry share. Moreover, the increasing exports from the region will propel the production of crude oil and unconventional energy sources further supporting the product growth over the study timeframe. However, political instability in the countries including Syria and Libya will affect the volume growth in the region.

North America will witness a considerable growth over 6.7% in the clear brine fluids market size owing to the proliferating shale gas sector in countries including the U.S and Canada. Advancement in technologies of drilling rigs including hydraulic fracturing and horizontal drilling for gas exploration will significantly support the product share over the study timeframe. Moreover, the increasing product use in the shale gas reserves will also contribute to the volume size. Industry players also engage in R&D investments for development of petroleum-based product to cater the wide-ranging applications in the end user industries.

Industry players involve in implementing strategies to cope up the end user requirement and increasing their revenue generation across the globe. For example, in October 2019, Sinomine Specialty Fluids signed a mutual agreement with Equinor ASA for the supply of drilling and completion fluids manufactured from cesium format. This contract will support to enhance their production capacity and increase their business share to gain competitive edge. Furthermore, prominent players operating in the marketplace includes Schlumberger, Halliburton, Albemarle Corporation, Israel Chemicals Limited, Tetra Technologies Inc., etc.

The clear brine fluids market report includes in-depth coverage of the industry with estimates & forecast in terms of volume in kilo tons and revenue in USD million from 2016 to 2026, for the following segments:

Clear brine fluids market will observe a CAGR of 6.3% over 2019-2026 with increasing product usage owing to its suitable physiochemical properties in the oil and gas industry.
Potassium chloride segment will expand significantly through 2026 on account of increasing product demand in oil and gas sector.
North America will witness a CAGR of over 6.7% through 2026 owing to the expanding shale gas sector in countries including the U.S and Canada.
High product demand due to the presence of several crude oil reserves in the countries including Saudi Arabia, Iran and Kuwait makes Middle East and Africa a prominent hub for the industry.
Customize this Report
Inquiry Before Buying