Cell Line Development Market size was valued at around USD 5.8 billion in 2021 and is expected to witness around 10.1% CAGR from 2022 to 2028. Cancer has become more common over the last decade due to changes in food habits, lack of physical activities, and overall lifestyle. Furthermore, technological advancements along with growing vaccine production will increase the demand for cell line development. 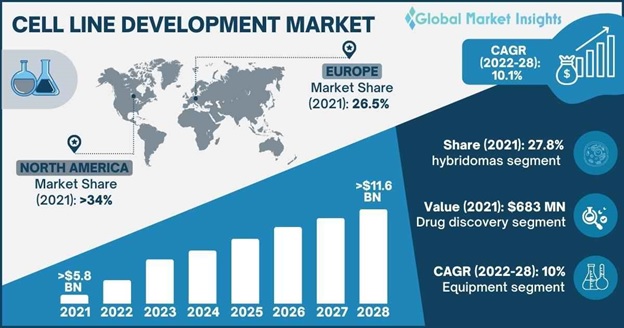 Additionally, rising innovations in biologics and increased demand for targeted therapies like monoclonal antibodies will further boost the market. The monoclonal antibodies are widely used in treatment of cancer. The World Health Organization (WHO) declared COVID-19 as a pandemic in March 2020. Since then, the mortality rate due to chronic conditions has increased exponentially. Thus, the impact of COVID-19 on the cell line development industry is observed to be positive. The pandemic called for the need of vaccines in a large scale thus boosting the production requiring cell line development procedures.

Cell line development is a process of developing highly productive, stable cell lines essential for the production and manufacturing of bio-therapeutics. These are single-celled derived and used to produce vaccines, monoclonal antibodies, and fusion proteins. The development process involves screening thousands of clones to find those that yield a high amount of biproduct and exhibit desired critical quality attributes. These properties of cell lines increase their use in the production of biological drug substances. Such scenarios increase the demand for cell line development.

The increase in the prevalence of cancer in low-income and middle-income countries is one of the major factors driving the cell line development market share. According to the International Agency of Cancer Research, in 2020, 9,503,710 new cancer cases were found in Asia. Aging, global warming, and unhealthy lifestyle lead to physiological changes triggering cancer. The cell line development plays an important role in development of therapeutic monoclonal antibodies and novel-antibody based therapies. Thus, rise in various types of cancer, acceptance of targeted therapies, and technological advancements in cell line development will upsurge the business growth. 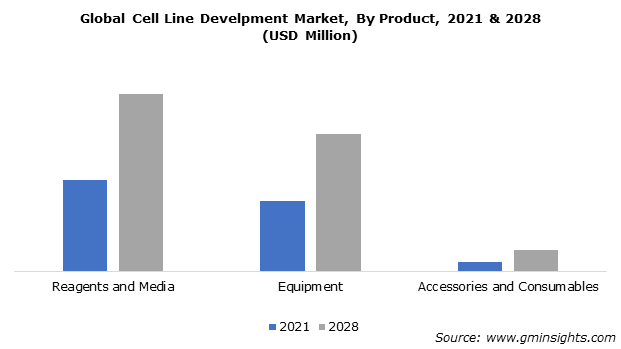 Furthermore, the quality of reagents and media affects the experimental results and the production of biotherapeutics. The segmental growth is driven by increasing product approval and new product launches. For instance, in April 2020, CEVEC Pharmaceuticals GmbH announced the launch of the ELEVECTA platform, that will produce stable cell lines for AAV (Adeno-associated viral) vector for gene therapy. The technology increases the production of viral vectors, used in the production of monoclonal antibodies and recombinant proteins. 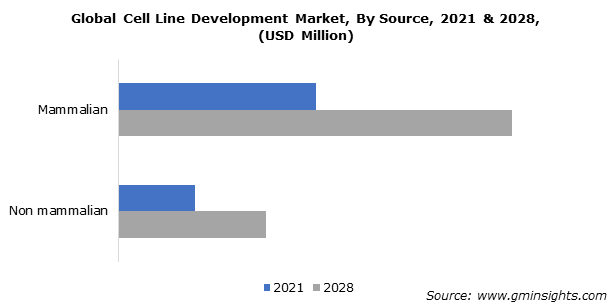 By source, the cell line development market is fragmented into mammalian and non-mammalian cell lines. Among them, the mammalian segment accounted for over USD 4.1 billion in 2021 owing to the frequent use of human cell lines in the expression systems. The mammalian cells undergo post-translational modifications. These modifications are highly exploited in the biomedical research industry.

Furthermore, they are also used in drug discovery programs for assay development. The proteins expressed by recombinant cells are used for screening of target-based identification of compounds. It helps in proper drug screening and development processes.

Based on application, the cell line development market is divided into bioproduction, drug discovery, toxicity testing, tissue engineering and research. The bioproduction segment accounted for around USD 2.7 billion in 2021. Increasing R&D expenditure to produce antibiotics, vaccines and other biological substances will accelerate the segmental as well as market growth.

According to WHO, as of January 2022, in total 9 different vaccines have been produced against coronavirus. This rise in production will flourish the market growth. Thus, factors such as increased awareness about vaccination, and production of antibiotics to combat various diseases demand for cell line development.

North America cell line development business captured over 34% market share in 2021 and is expected to grow significantly during the forecast years. High regional growth is owing to increased R&D expenditure due to technological developments. These advances are followed by new drug discoveries triggering the adoption of different but unique procedures for bioproduction that will drive the market growth.

The cell line development market report includes in-depth coverage of the industry with estimates & forecasts in terms of revenue in USD from 2022 to 2028, for the following segments:

Cell line development market is slated to surpass USD 11.6 billion by 2028 and could grow at a CAGR of about 10.1% from 2022 to 2028 driven by growing vaccine production and constant technological developments.
In 2021, the reagents and media segment captured around 53% of the overall market share and will grow as the product contains supplements and sera that support cell survival, biological function, and proliferation.
The overall market revenue from recombinant cell lines could grow at a CAGR of more than 9.5% over 2022-2028 driven by increasing investment in R&D activities to develop new products and constant technological advancements.
Cell line development market share from bioproduction application was recorded at around USD 2.7 billion in 2021 and will grow owing to soaring expenditure on R&D to produce various biological substances like vaccines, antibiotics, and more.
North America held more than 34% of the global cell line development market share in 2021 owing to novel drug discoveries further encouraging the adoption of different and unique bioproduction procedures.
Customize this Report
Inquiry Before Buying