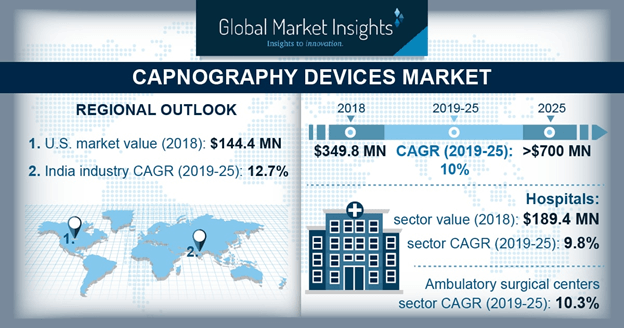 Rise in number of respiratory disease in developed regions will enhance the capnography devices market growth in the near future. Capnography can be used as an alternative to spirometry for evaluating chronic obstructive pulmonary disease (COPD) patients. Capnography is ideal monitoring device for patients with respiratory distress conditions such as COPD, asthma, bronchiolitis, and heart failure.

However, lack of skilled professionals will be one of the major factors responsible for impeding the market growth. Capnography is a complex device that requires trained and skilled professionals. According to the American Association for Respiratory Care, the procedure can be performed only by trained healthcare staff in the hospital, extended care facility, or during transport for mechanically ventilated patients. Hence, above mentioned factor will be a market hindering factor. 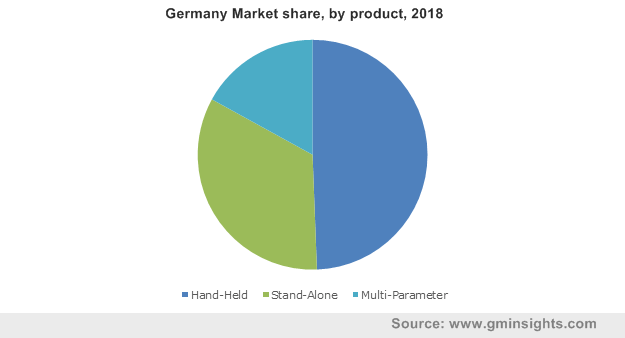 Hand-held capnography devices market was valued at USD 172.8 million in the year 2018 and around 100,000 capnography units were sold across the globe. The growth of hand-held capnometers will be attributed primarily to numerous benefits offered by the device.  These device are small, portable and lightweight devices designed to fit in the palm for easy movement and convenience. Hand-Held devices are used in adults, pediatrics and infant patients for measuring end-tidal carbon dioxide. Several benefits and advantages provided by hand-held capnography devices will augment the demand and adoption rate, fueling the industry growth.

Multi-parameter capnography devices market is estimated to grow at 10.6% in the forthcoming years and around 50,000 units are estimated to be sold by the end of the year 2025. Multi-parameter capnometers are used to measure two or more parameters simultaneously. They are non-invasive, portable capnography devices used to monitor several patient parameters including oxygen saturation, pulse rate, the pressure of carbon dioxide and end-tidal carbon dioxide. Hence, aforementioned factors will play significant role in the market growth.

Side stream capnography technology market held the majority market share of around 70% in the year 2018. Side stream capnography monitors or technology is designed to divert inhaled CO2 through a tube connected to T-piece. A T-piece is inserted in an endotracheal tube or anesthesia mask for sampling purpose. The sample collected in T-piece is passed to a sensor through the tube. Side stream technology allows monitoring of impulsive breathing in non-intubated patients as sampling can be done directly from the nasal cavity. Aforementioned factors will enhance the business growth in the near future.

Original equipment manufacturer (OEM) market was valued at USD 260.9 million in the year 2018. An original equipment manufacturer is an establishment that sells the components or parts of capnography devices to a company so that it resells those devices to its customers under its own brand name. An OEM often purchases from a manufacturing company and sells it to specific consumers. For instance, all capnography device components are not manufactured by companies because some parts may be the products of another company.

Hospitals as an end-use segment was valued at USD 189.4 million in the year 2018. Capnography is primarily used by anesthesiologists to monitor carbon dioxide in patients receiving general anesthesia. The capnography devices are used for monitoring the effectiveness of cardiopulmonary resuscitation and constant monitoring of patients admitted in ICU. Hence, increase in number of surgical and other complicated procedures will augment the growth of capnography devices market.

Use of capnography devices in ambulatory surgical centers is estimated to increase and grow at 10.3% in the near future. Ambulatory care centers also known as outpatient care centers refers to medical services provided to an outpatient basis without hospitalization. The procedural sedation may be required in ambulatory care centers for performing minor operations such as cardiac catheterization, endoscopy, and in case of emergency transfer of patient form care centers to hospitals. Hence, above mentioned factors will play significant role in the market growth. 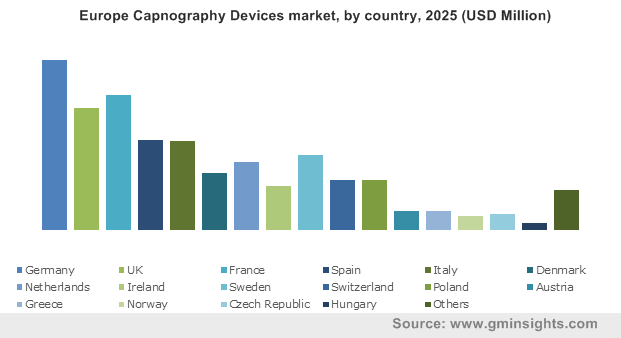 U.S. dominated the North America capnography devices market and was valued at USD 144.4 million in the year 2018. The large market size is attributed to increase in prevalence of cardio-respiratory disease and huge patient population. According to the American Thoracic Society, respiratory failure due to pneumonia and chronic obstructive pulmonary disease is third-leading cause of death in U.S. Hence, increase in number of respiratory disorders and surgical procedures will enhance the market growth in the country.

India is estimated to grow at 12.7% in the near future owing to increase in prevalence of respiratory diseases due to cigarette smoking. As per the World Health Organization (WHO), it is estimated that India is home to around 10% of smokers. The market growth in India is also attributed to improved healthcare system, rise in awareness among the people and growing geriatric population.

Some of the significant market players involved in the capnography devices market include CareFusion, Masimo Corporation, Medtronic, Smiths Medical, among other market players. These players have executed several strategic initiatives such as merger and acquisitions, collaborations, new product launch, new product development and partnerships that have enhanced their financial stability and assisted in evolving as major market players.