Beverage Premix Market size was valued at more than USD 60 billion in 2021 and is estimated to record more than 5% CAGR during the forecast period 2022-2030. Increasing health benefits of green tea and healthy drinks will propel the global industry growth. 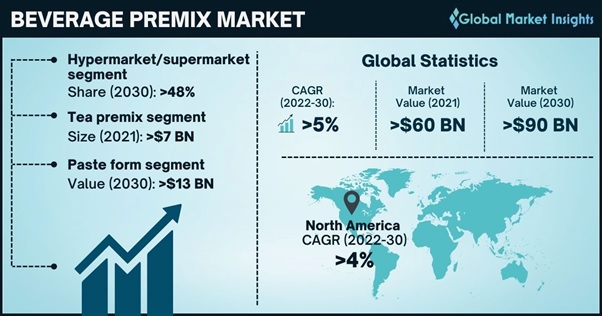 Premixed beverages are becoming popular among fitness enthusiasts as they can save time on preparing their energy drinks from scratch. A growing percentage of people are becoming health conscious and increasing their consumption of beverages such as protein shakes and energy drinks. According to the U.S. Department of Health and Human Services (HHS), men in the age category of 18-34 years are the largest consumers of energy drinks. The department further stated that one-third of teenagers between 12 and 17 years drink these beverages on a regular basis.

This trend has given manufacturers the opportunity to produce beverage premixes in different forms, such as pastes, powders, liquids, and granules to suit varied consumer requirements. For example, health drinks, such as green tea have gained significant momentum in recent years due to the health benefits offered. Green tea contains antioxidants and is consumed by people who want to enhance their metabolism, with the beverage available in several forms as per consumer requirements.

However, rising health concerns regarding the excessive consumption of some drinks might hamper the global beverage premix market demand. The COVID-19 pandemic in 2020 dramatically boosted the demand for health beverages as people wanted to improve their immunity level to avoid getting infected by the virus. But it has also led to overdependence on these drinks. For example, green tea also contains caffeine, and its excessive consumption can cause serious symptoms, such as irregular heartbeat, severe headache, and liver injury. These side-effects can discourage people from buying some beverage options. 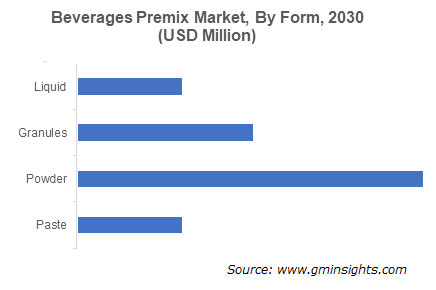 Based on form, the beverage premix market is divided into paste, powder, granules, and liquid. Paste form segment is projected to surpass USD 13 billion by 2030. Beverage premix pastes are easier to store & use and have a long shelf life. Many customers are becoming aware of the benefits of using these pastes. For example, instant coffee manufacturers have taken inspiration from dalgona coffee to produce instant coffee pastes. This mix will help customers save time on making coffee from scratch, while also offering them the advantages of instant coffee. 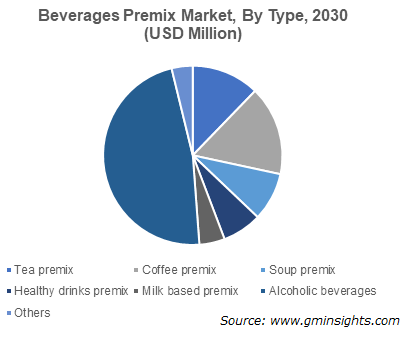 Beverage premix market share from the tea premix segment exceeded USD 7 billion in 2021. The worldwide tea-drinking population is growing at a notable rate every year. According to the Tea Census Report published by the U.K. Tea & Infusions Association (UKTIA) in 2022, the nation imports nearly 100,000 metric tons of tea each year, while consuming over 100 million cups of tea every day. These statistics will bolster the demand for premixed tea products to make the tea-making process faster and more convenient. Since more people are gaining a deeper understanding of the health benefits of drinking the beverage, the demand for premixed tea will rise considerably. 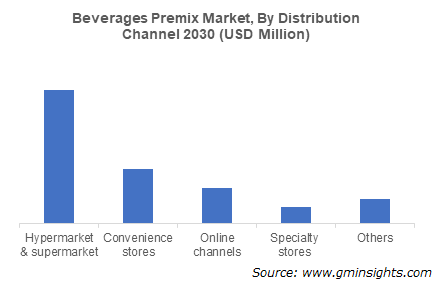 The hypermarket/supermarket distribution channels will capture more than 48% share of the global beverage premix market by 2030. The network of supermarkets and hypermarkets is growing at a strong pace across the developed and developing economies due to factors, such as rising disposable incomes and urbanization. More people are opting to shop from supermarkets as these places offer a variety of products and brands to choose from. As a vast portion of the customers that visit supermarkets belong to urban areas, the demand for instant foods and beverages has skyrocketed. It has prompted hypermarket chain owners to increase their investments in ready-to-drink beverage premixes to suit the unique tastes and preferences of customers. 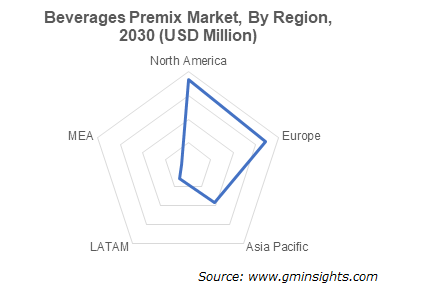 North America beverage premix market value is anticipated to register 4% CAGR through 2030. The demand for premixes is expected to increase across the region with the notable presence of beverage consumers in corporate offices. The network of offices has grown at an appreciable pace as many reputed manufacturers and technology firms have set up their base in the region. Since more employees are increasing their daily coffee consumption, there is a rising need for instant beverage premixes from corporate cafeterias.

The region’s processed food & beverage industry is also expanding at a strong pace due to the growing need for instant foods and drinks. The demand for instant health and leisure beverages has also increased significantly in the region. Several companies are entering into partnerships to launch such products and expand their customer base. For example, in June 2022, Coca Cola teamed up with Brown-Forman Corporation, the parent company of the whiskey brand Jack Daniel’s, to unveil a ready-to-drink pre-mixed cocktail.

For example, in November 2021, Coca-Cola announced the acquisition of BODYARMOR, a range of sports productivity and hydration drinks. BODYARMOR is a new beverage entrant in Coca-Cola’s portfolio with long-term growth potential that works collaboratively to improve the health and nutrition of children. This strategic initiative enhanced Coca Cola’s customer base.

The COVID-19 pandemic in 2020 had a favorable influence on the demand for beverage premixes as more people were purchasing instant foods and drinks in bulk. People turned to panic buying to avoid going out of stock of these essentials products. Online shopping also picked up immense pace during this period, and since ready-to-drink beverages and their premixes are easily available online, their demand witnessed a strong surge. The work-from-home trend also influenced the need for beverage premixes to avoid going outside for coffee or tea requirements.

The beverages premix market research report includes in-depth coverage of the industry with estimates & forecast in terms of volume in kilo tons and revenue in USD million from 2018 to 2030 for the following segments: