Non-Alcoholic Beer Market size exceeded USD 9.5 billion in 2019 and is estimated to register over 7.5% CAGR between 2020 and 2026. Increasing population of non-drinkers and growing adoption of health lifestyles should drive the growth of non-alcoholic beer industry. 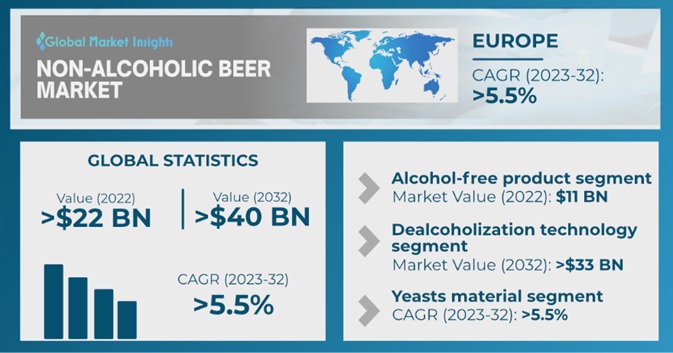 Alcohol-free beer is a non-alcoholic beer with alcohol content free up to 0% and is primarily manufactured by the dealcoholization process. The rising adoption of a healthier lifestyle along with growing awareness of the benefits of alcohol-free beverages is augmenting the product demand in India, Japan, and China. Non-alcoholic beer is a preferred beverage owing to the absence of alcohol by volume (ABV) in the product. A wide range of flavors and the soothing taste are capturing a wide attention of young consumers, adult population, and women boosting product demand.

Increasing awareness against the negative health effects of alcohol consumption is among the major factors boosting non-alcoholic beer market penetration. Growing health-consciousness among consumers for the benefits of consuming malted beverages along with product availability will drive industry outlook. Alcohol consumption has been a social issue for decades in several countries owing to the strong presence of traditional culture and beliefs among a significant section of the population which should support the non-alcoholic beer market trends. 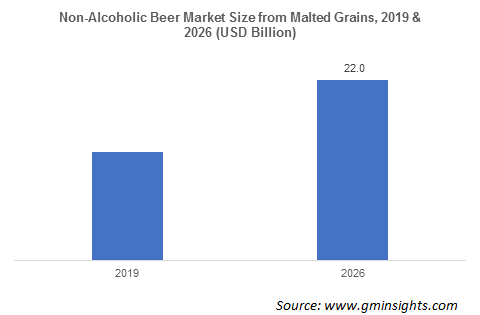 Non-alcoholic malt beer market is likely to surpass USD 22 billion by 2026 on account of significant expansion of the food & beverage industry in developing regions such as Brazil, China and Vietnam. These countries are witnessing rapid urbanization and the adoption of hectic lifestyles which has driven the consumption of convenience food. Consumers also exhibit the willingness to pay higher prices for products which give a statement of higher living standards.

Growing disposable incomes and increasing westernization in emerging economies should increase consumer spending on beverages. Developed nations such as the U.S. and Germany exhibit a high demand for non-alcoholic beverages which has influenced manufacturers to adopt innovative flavors to suit consumer palates and achieve market leadership. Consumers are seeking healthy and convenient food & beverage products which help them unwind from their stressful lives. Non-alcoholic malt beer contains fewer calories than carbonated drinks which makes it a healthy alternative. 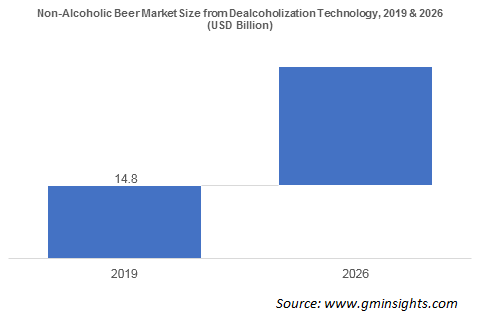 Non-Alcoholic Beer market from dealcoholization technology surpassed USD 14.5 billion in 2019. Delalcoholization of beer is considerably easier as compared to wine owing to its lower alcohol content. Moreover, acidity concentration is a major challenge associated with the production of non-alcoholic beverages and beer has low acidity which enhances the efficiency of the process.

Rising need for generating a strong and natural flavor is fueling the adoption of dealcoholization via the reverse osmosis process. Growing demand for beers with less than 0.5% alcohol content is driving the adoption of vacuum distillation which ensures the effective removal of alcohol. A dealcoholization process consisting of a combination of vacuum distillation and limited fermentation helps produce a desirable non-alcoholic beer with a round, smooth & rich flavor and enhanced foam, which should accelerate non-alcoholic beer market forecasts.

Alcohol-Free Beer market size from supermarkets is poised to surpass USD 8 million by 2026.  Rising investments in supermarket chains along with consumer buying trends that indicate consumers preference toward the acquisition of multiple goods from a single outlet are fostering the industry share. Low product prices and higher discounts in supermarkets benefit consumers, driving product demand through this sales channel in several countries. Additionally, an extensive variety of choices, size, flavors, and price range allow consumers to choose their preferences.

Increasing urbanization along with infrastructure developments is propelling the proliferation of supermarket chains in semi-urban and urban areas. This will positively influence the availability and higher product demand, primarily in developing countries such as Mexico, China, India, and Thailand which exhibit significant economic growth. Supermarkets are increasingly capitalizing on the growing consumption of natural beverages by devoting substantial shelf space to various natural beverage categories which represents ample growth opportunities for the market. 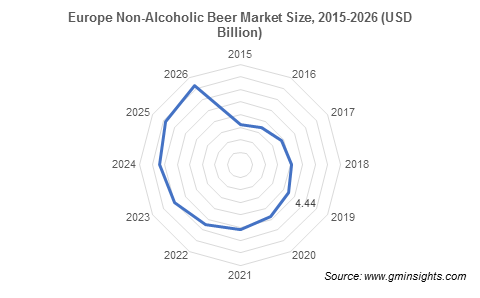 European Non-Alcoholic Beer market exceeded USD 4 billion in 2019 owing to efforts by beer companies to capitalize on the growing interest in the low alcohol varieties by launching products in this segment. Consumption of non-alcoholic beer is growing fast as consumers have become more aware regarding the adverse effects of excessive sugar and calorie consumption & are focusing on healthier lifestyles.

The significant presence of liquor manufacturers and breweries coupled with rising adoption by consumers are primary factors influencing regional market landscape. Increasing promotional activities such as advertisements should boost the market size. Beverage manufacturers in the region are increasingly engaged in advertisements, promotions and new product development. Germany non-alcoholic beer industry is driven by an increasing trend of creative marketing techniques such as manufacturing positioning zero-alcohol beers as isotonic sports drinks.

Global Non-Alcoholic Beer market is moderately fragmented and key players include Coors Brewing Company, Heineken N.V., Anheuser-Busch InBev and Carlsberg Breweries Group. Major manufacturers are primarily engaged in product innovation in beer categories and strategic R&D initiatives. For instance, in April 2019, Heineken announced the launch a non-alcoholic beer Heineken 0.0 primarily in European markets to capitalize on the rising demand for zero alcohol beers despite an overall decline in beer consumption in the region.

The Non-Alcoholic Beer market research report includes in-depth coverage of the industry trends, with estimates & forecast in terms of volume (Million Liters) and revenue (USD Million) from 2015 to 2026, for the following segments:

The market for non-alcoholic beer had reached USD 9.5 billion worldwide during 2019 and is projected to witness around 7.5% CAGR up to 2026.
The global non-alcoholic malt beer industry share is anticipated to cross USD 22 billion in value by 2026 with the increase in demand from developing countries like China, Brazil, and Vietnam.
The market share of dealcoholization technology segment was USD 14.5 billion in 2019 and will expand with the need for generating natural and strong flavor via the reverse osmosis process.
Europe alcohol-free beer market share had surpassed USD 4 billion in 2019 as consumer interest grows in low alcohol products owing to increased focus on healthier lifestyles.