Atrial Fibrillation Devices Market size surpassed USD 5 billion in 2018 and is anticipated to grow at over 14.2% CAGR from 2019 to 2025. Also, the number of atrial fibrillation devices sold were around 1.5 million units in 2018 and will reach approximately 4 million units by 2025. 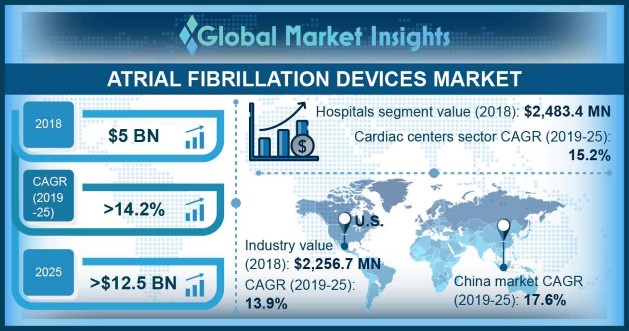 Increasing prevalence of cardiovascular diseases in developing regions owing to surge in sedentary lifestyle and increasing habit of binge eating will fuel acceptance rates in developed as well as in certain areas in developing nations.

However, high price of devices will be one of the major reasons impeding the adoption rates in under-developed and few developing countries. High price factor will continue to hinder the atrial fibrillation devices market value during the forecast timeframe. Also, lack of obligatory infrastructure to conduct smooth atrial fibrillation procedures in certain emerging regions might hamper the industry expansion. 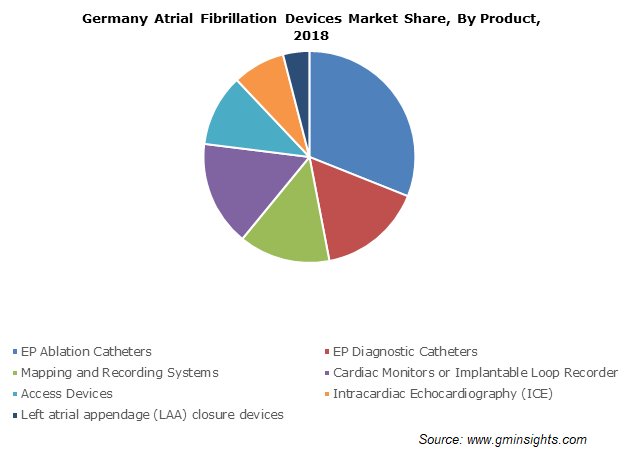 The atrial fibrillation devices market for mapping and recording systems will showcase 14% growth rate through 2025. Modern advanced mapping systems used in AF ablation have revealed promising results and could pave the way to a new epoch of individual ablation and substrate characterization strategies. The recent technological enhancements in the mapping systems have resulted in better visualization of multiple catheters simultaneously, thus, propelling product demand. Increasing adoption rate of these devices in developed and emerging regions has resulted in an upward trajectory of growth.

The hospitals segment in the atrial fibrillation devices market crossed USD 2.48 billion in 2018. A substantial proportion of atrial fibrillation surgeries happen in hospital settings; thus, demand for these devices are the highest. The hospital end-use segment will continue to lead, due to rising number of multi-specialty hospitals and people’s preference for hospitals over other healthcare settings.

The cardiac centers segment is estimated to attain a CAGR of 15.2% till 2025. cardiac centers are being the most preferred setting in developed as well as developing countries. Hence, usage of advanced technologies in clinics and surgical centers should propel the industry progression. 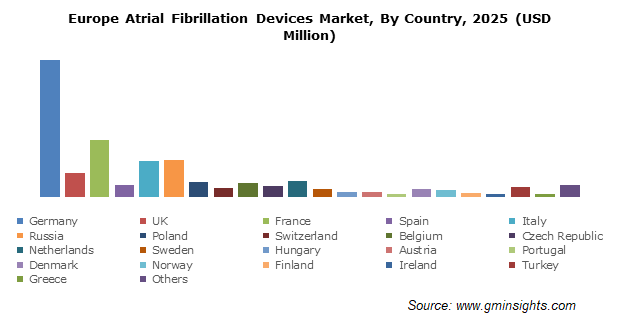 U.S. market size was over USD 2.25 billion in 2018 driven by the country being the primary new technology adopter as well as for being the most developed region to provide state of art facilities for atrial fibrillation procedures. It will witness modest growth credited to relatively low addressable needs.

China atrial fibrillation devices market is poised to expand at more than 17.6% CAGR by 2025 impelled by the rising prevalence of cardiac diseases due to sudden transition of lifestyle-related habits and growing trends of tobacco intake in millennials. Furthermore, expansion of new healthcare facilities, development of hospitals, and growing acceptance of private clinics have spurred the industry revenue. Current unmet need and increasing number of baby boomers who are prone to cardiac diseases are primary factors to stimulate the market progression during the forecast timeframe.

Atrial fibrillation is recognized as one of the common valvular diseases among individuals due to various factors such as high alcohol intake, hypertension, obesity, etc. However, with the growing acceptance rate of advance technology in industry, devices and procedures providing diagnosis and treatment are also increasing. To address the unmet needs globally, few multinational companies started manufacturing innovative offerings to the healthcare industry across the world. With ever growing need in the face of growing cardiac diseases, numerous products were launched in the market. By the beginning of 2000’s, cutting-edge technologies such as advance mapping and recording systems used in catheter ablation procedures were made available by significant medical devices manufacturing firms. An era of expertise has been established lately that makes atrial fibrillation not only curable but also preventable.

Atrial fibrillation devices market research report includes in-depth coverage of the industry with estimates & forecast in terms of revenue in USD million from 2014 to 2025, for the following segments: