Pacemakers Market size exceeded USD 3 billion in 2018 and is expected to achieve over 2.9% CAGR from 2019 to 2025. The major factor driving the market growth is growing number of patients diagnosed with tachycardia, bradycardia and heart blockages. Also, the changes in the lifestyle and increasing number of chronic diseases are also boosting the product demand. 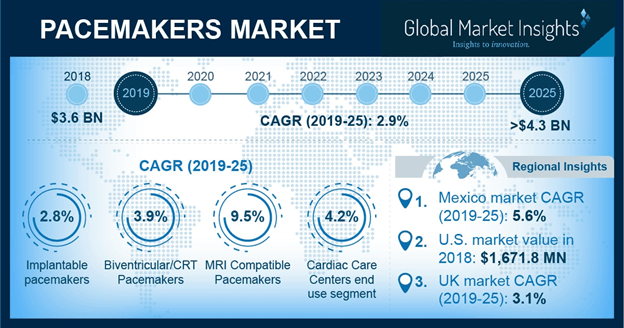 Pacemakers are small electrical devices, that are used to treat arrhythmias which are fitted in the chest or abdomen under the supervision of local anaesthetic with sedation. The pacemakers first entered the modern era with lithium battery in 1969. Initially, it was placed on the ventricle, however, later the demand for dual chamber started soaring high and hence, the development and availability of dual chamber pacemakers expanded the life span and the capabilities of modern pacemakers.

One of the main reasons behind the development of dual chambers was to monitor electric impulse activity in the atrium and anticipate whether pacing needs to synchronize the electrical activity with the heart’s intrinsic impulse activity. Hence, the purpose of device is to assist patients with a complete atria-ventricular block, a disorder where the heart activity is very little. 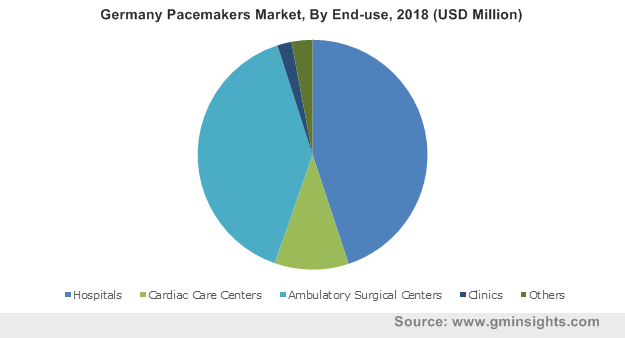 Recent technological advancements in pacemakers are boosting the demand for these products. According to the Diagnostic and Interventional Cardiology, in 2018, all the U.S. pacemaker vendors provide MRI-safe device technologies that are cleared by FDA for commercialization.  Several advancements have been taken place in the recent past years in modifying pacemaker devices such as dynamic pacemaking, microprocessor-controlled devices and transitional tissue welding, that are fuelling the pacemakers industry growth. Furthermore, according to a recent article, around 600,000 pacemakers are implanted annually to treat bradycardia patients and 3 million people are presently living with pacemaker across the globe. Hence, these advancements are expected to rapidly spur the adoption in the forthcoming years.

However, high cost of the device, lack of experienced professionals and poor reimbursement scenario in emerging economies are expected to impede the growth of the market.

Growing demand for implantable pacemakers will thrive the market growth

Implantable pacemakers market demand accounted for the largest revenue size of USD 3,189.1 million in the year 2018. The high market share is owing to rising demand for implantation of cardiac pacemakers that has improved the quality of life of several patients across the globe. In addition, the presence of multiple leads that allow physiological functioning of the heart normally are also contributing towards the market growth. Also, according to a recently published article, around 85% of implantable are used as compared to 15% of external. Thus, with burgeoning demand for the implantation of pacemakers, the market is expected to witness a significant growth trajectory.

Biventricular devices market is forecasted to grow at 3.9% over the estimation period. The significant growth is attributed to couple of factors such as technological advancement of devices for cardiac disease management, rising awareness and initiatives pertaining to cardiovascular diseases and high burden rate of heart failures. Hence, the adoption of these devices in heart failure patients is boosting the market growth in the future. 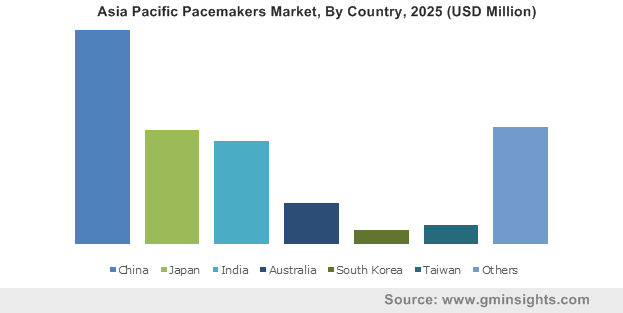 MRI compatible pacemakers market revenue is estimated to grow at a robust rate of 9.5% over the forecast timeframe. The rapid growth is owing to rise in usage of implantable pacemakers that would require magnetic resonance imaging during their lifetimes. According to the recent published article, around 75% of patients are presently living with implantable cardiac electronic device that need magnetic resonance imaging throughout their life. Furthermore, in the recent past years, various centres have started providing MRI to patients with cardiac pacemakers. Thus, owing to such developments, it is anticipated that MRI compatible pacemakers is expected to witness momentous market growth in the upcoming years.

Tachycardia application is estimated to show highest growth at 4.4% over the analysis period. The spur in the tachycardia pacemakers market size is owing to the rising prevalence of atrial fibrillation, atrial flutter, rise in ageing population, changing lifestyle and some of the related risk disorders such as hypertension and hyperthyroidism. According to a recently published article, in 2014, around 2 million patients are affected with tachycardia in the U.S. Thus, the demand for pacemakers in order to cure tachycardia is expected to bolster the market growth significantly.

Pacemaker implantations in patients of 65+ years of age accounted for the largest revenue size of USD 2,947.5 million in 2018. The spur in the market share is owing to the rising prevalence of chronic diseases such as heart attacks, diabetes, hypertension and atrial fibrillation. According to a recently published article, around 80% to 85% of the pacemakers are implanted in the geriatric population across the globe. Thus, the demand for pacemakers in order to cure arrhythmias is expected to boost the market growth significantly in the coming years.

Implantation of pacemakers in cardiac care centers is estimated to grow at 4.2% over the forthcoming years. The upsurge in the market share is owing to several factors such as accessibility to the treatment at ease and growing number of patients approaching to these centres due to proper reimbursement facility. Also, availability of well-trained team of cardiologists and well-equipped centres are some other factors that are contributing in the cardiac care centres market growth and expected to project a lucrative growth over the forecast period.

U.S. dominated the North America pacemakers market share and was valued at USD 1,671.8 million in the year 2018. Rising number of FDA approval for advanced pacemakers, increasing incidence of cardiovascular diseases, growing geriatric population, rising healthcare expenditure, and accessibility to technologically advanced products are some of the factors that are propelling the market growth positively in the country. Furthermore, various medical device manufacturers that are involved in research & development of modifying pacemakers are also expected to foster the market growth in the country.

Mexico is estimated to expand at a pace of 5.6% CAGR during the forecast period. Growing geriatric population, high prevalence of cardiovascular diseases, rising awareness pertinent to availability of modified pacemakers, increasing number of patient suffering from arrhythmia in the country are expected to bolster the market growth positively in the future.

Few of the notable industry players operating in global pacemaker market share are BIOTRONIK, Boston Scientific, Pacetronix, Medtronic, Abbott, OSCOR Inc., among others. Players have been engaging in product launch strategies, mergers & acquisitions and collaborations in order to expand their product portfolio and gain competitive advantage.

The Pacemakers Market research report includes an in-depth coverage of the industry with estimates & forecast in terms of revenue in USD and volume in Units from 2014 to 2025, for the following segments:

The market size of pacemakers surpassed USD 3 billion in 2018.
The industry share of pacemakers is projected to expand at 2.9% CAGR through 2025.
Heart conditions like tachycardia are growing at an exponential rate. Growing prevalence of atrial flutter, atrial fibrillation, changing lifestyles, rise in geriatric population, and hyperthyroidism and hypertension disorders would drive the adoption of pacemakers for the treatment.
The North America is likely to witness immense growth led by the U.S. owing to increasing FDA approval for more advanced pacemakers, rise in cardiovascular diseases, growing geriatric population, rising healthcare expenditure, and easy access to technologically advanced products.
High device cost, poor reimbursement scenario across emerging economies and shortage of experienced professionals are likely to impede pacemakers demand.