Artificial Disc Market size surpassed USD 1.6 billion in 2019 and is projected to achieve over 18.6% CAGR up to 2026. Growing awareness among people regarding benefits of disc replacement procedure over spinal fusion surgeries will further upsurge the industry growth. 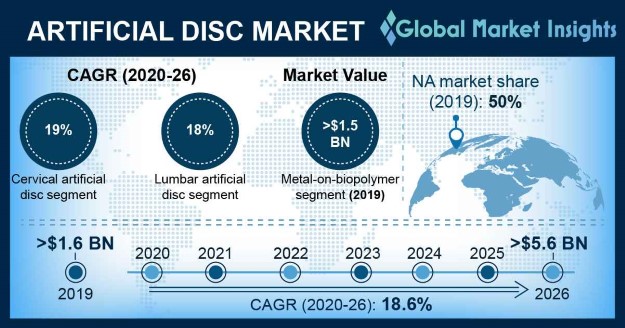 Disc refers to a soft cushioning structure made of cartilage-like tissue, situated between the individual bones of the spine. An artificial disc, commonly known as spine arthroplasty device or disc prosthesis, is a device implanted into the spine to emulate functions of a normal disc. These compressible discs, that are primarily made of metal or biopolymer, or a combination of both, aid in retaining movement and flexibility. Artificial disc is a rapidly growing segment of the spinal implants market.

Artificial Disc Replacement (ADR) is an incredible step in the evolution of spinal surgery. Charite, the first disc implant used in total disc replacement, was created in Germany in 1982. Further, Fernstrom created and implanted the first cervical artificial disc prototype in 1966. Size constraints, proximity to the spinal cord and functional complexity of the intervertebral disc led to slow development of cervical arthroplasty as well as its implementation in the clinical practice. Focus on cervical disc arthroplasty underwent a resurrection in the 1990s.

In 1991, the first generation of Cummins-Bristol ball-and-socket, a metal-on-metal type implant was developed, that required excessive disc space distraction during insertion and led to subsequent facet joint separation. Later, a new type of metal-on-plastic artificial disc was invented by Bryan to overcome the drawbacks of initially available discs. In January 2000, the first Bryan cervical disc was implanted, wherein, around 6000 patients were treated with these procedures. Moreover, several artificial discs have been evaluated in the FDA-controlled IDE prospective randomized clinical trials. Large number of new artificial discs in the IDE stage of investigation have led to several opportunities for industry growth over the past few years. 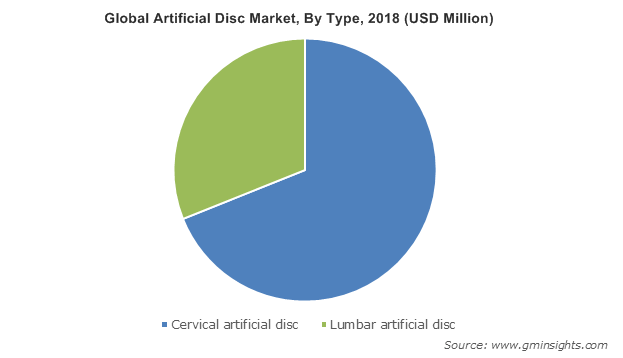 Increasing prevalence of orthopaedic diseases in developed as well as developing economies is the key factor that will drive artificial disc market revenue during the forecast period. Degenerative disc diseases (DDD) are often attributed to upright and bipedal locomotion that exerts mechanical stress on the vertebral column. DDD is directly co-related with age. High adoption of sedentary lifestyle coupled with increasing number of baby boomers worldwide prone to various musculoskeletal diseases will thus accelerate the market growth.

Rising awareness among people regarding technologically advanced spinal discs coupled with high demand for minimally invasive surgeries will serve to be another key driver that will surge the artificial disc business growth. Development of advanced products such as Mobi-C multi-level artificial disc will fuel its adoption in patients having issues at two consecutive spinal disc.

Moreover, cervical-total disc replacement (C-TDR) procedure has proved to be clinically superior in almost all parameters in clinical trial as compared to anterior cervical discectomy and fusion. This will increase adoption of disc replacement surgeries among the patient population, thereby boosting the market growth. However, high out-of-pocket spending required for artificial disc replacement procedures may hamper industry growth during the forthcoming years.

Artificial discs are segmented into cervical and lumbar artificial discs. Lumbar artificial disc market segment is estimated to witness around 18% CAGR over the forecast period due to rapidly growing geriatric patient pool suffering from orthopaedic diseases. Low back pain (LBP) is one of the major disabilities among the geriatric population that limits functionality and decreases the quality of life. Increasing prevalence of LBP will increase the demand for lumbar total disc replacement (LTDR) procedures, thereby boosting the lumbar artificial disc segment growth. Growing applications of LTDR procedure in patients with discogenic pain and degenerated lumbar spine will further spur the market size. 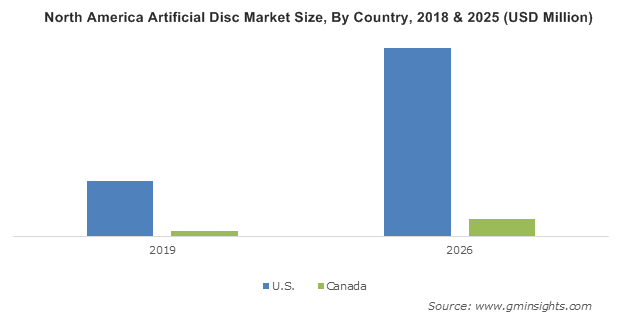 North America held more than 50% of total artificial disc market share in 2019 and is estimated to show significant growth over the analysis period. Growing prevalence of degenerative disc diseases in the region due to high adoption of sedentary lifestyle is the key factor that will spur the market size.

U.S. artificial disc demand accounted for around USD 800 million in 2019. Market size is attributed to rising prevalence of DDD and surge in number of people undergoing disc replacement procedures in the country. Strong foothold of key industry players in the U.S. will subsequently increase the demand for new and advanced devices among people, thereby driving the regional market growth during the forthcoming years. Moreover, partial government support for disc replacement procedures due to its advantages over the traditional methods will further augment the regional artificial disc industry growth.

The artificial disc industry research report includes an in-depth coverage of the industry with estimates & forecast in terms of revenue in USD from 2015 to 2026, for the following segments:

The market size of artificial disc exceeded USD 1.6 billion in 2019.
The industry share of artificial disc is expected to grow at 18.6% CAGR during 2020-2026.
An artificial disc, commonly known as spine arthroplasty device or disc prosthesis, is a device implanted into the spine to emulate functions of a normal disc.
Lumbar artificial disc industry is estimated to witness around 18% CAGR over the forecast period due to rapidly growing geriatric patient pool suffering from orthopaedic diseases, says a GMI report.
According to this report, North America is dominating the artificial disc market which covered more than 50% of the overall revenue share in 2019 and U.S. accounted for around USD 800 million.
The growth is attributable to the advantages offered by metal-on-biopolymer disc over the metal-on-metal disc such as better biocompatibility, high degree of rotation, flexible movement of spine as well as easy insertion.
Customize this Report
Inquiry Before Buying