Alternative Protein Market size exceeded USD 60.45 billion in 2021 and is estimated to grow at over 18.5% CAGR between 2022 and 2028 owing to the increasing concern towards pet health, feed manufactures are coming up with the feed products with high nutritional value. 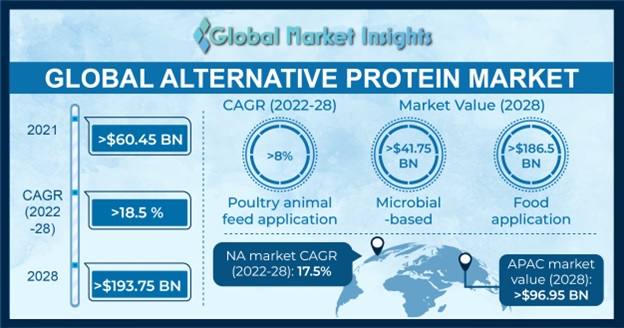 Alternative proteins are non-meat proteins that are obtained from various sources such as plants, fungi, and insects. Proteins sourced from insects, plants, and microbials are widely used to replace conventional animal-based proteins. Alternative proteins are used in dairy-free and meat-free diets such as meat analogs and various animal feed products. Consumer interest in health, ethical considerations, and minimal intake of protein calories are a few factors which is expected to boost the demand for alternative proteins.

Consumers are becoming aware of the importance of clean protein in their daily diet for energy and weight management which is anticipated to positively impact the alternative protein market growth. Surge in clean protein consumption along with increased awareness and adoption of sustainably sourced proteins by consumers is likely to fuel product demand. The alternative protein provides several health benefits such as increasing the nutritional constitution of the body and strengthening the immune system which should proliferate alternative protein market for food application which should favour market growth. 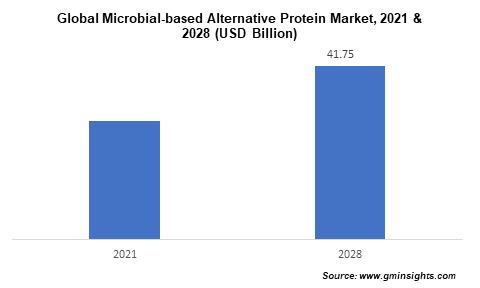 Global microbial-based alternative protein market is expected to grow over USD 41.75 billion by the end of 2028, attributed to the high adoption of sustainable sources for food and animal nutrition.  Growing health awareness among consumers for a consuming high protein diet along with rising environmental concerns among the population should foster market growth.

Increasing consumer awareness about personal health and fitness along with the increasing demand for dietary supplements should escalate microbial-based alternative protein demand. An increase in demand for microbial-based protein in food & beverage products due to health benefits including stimulation of the immune system and digestion is expected to fuel product demand. 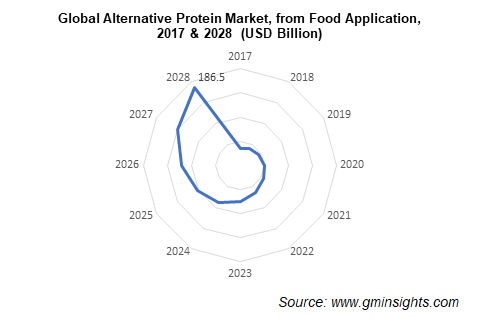 Global alternative protein market from food applications will surpass over USD 186.5 billion by 2028. Increasing awareness among consumers about the harmful health effects of meat & meat products is driving the demand for meat analogs, which should positively impact the alternative protein market. Plant-based protein sources, such as soy protein, are widely used in burger patties, minces, and sausages as they offer acceptable quality attributes of meat analogs in terms of taste & texture.

Texturized vegetable proteins offer elastic, spongy texture, and a wide array of other texture properties that are favorable for utilization in meat analogs products. Also, meat analogs provide advantages of better shelf life and safety as compared to meat products; therefore, alternative proteins are used in various food products. Consumer focus on sustainability, growing health concerns, and the craving for great taste in meat analogs are a few factors driving the demand for meat analogs, which is expected to positively impact the alternative protein market growth. 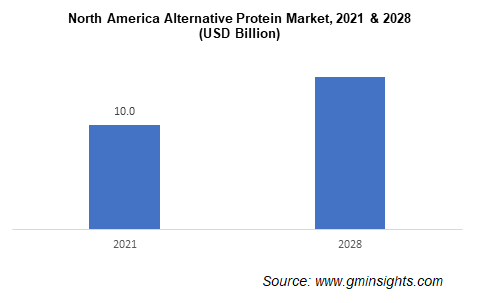 North America alternative protein market value exceeded USD 10 Billion in 2021 and is estimated to witness growth at around 17.5% CAGR through 2028 owing to the growing demand for nutritious ingredients along with increasing consumer attention toward preventive healthcare. Consumers in the American region are concerned about the ingredients used in food products, especially sustainability and health impacts, due to increased focus on sustainability and healthy diets.

The increasing demand for protein food products coupled with demand for healthy food ingredients has led manufacturers incorporate proteins from alternative sources. According to the Food & Agriculture Organization of the United Nations (FAO), edible insects contribute to food & security livelihood, improve livelihood, can diversify diets, and have a lower ecological footprint as compared to other protein sources.

Significant investments in R&D for product innovations in food & beverage sector along with a focus on animal nutrition and animal health should contribute towards regional industry growth. Increase in poultry meat consumption for high protein intake and as a less harmful source of animal protein as compared to red meat is driving the demand for poultry feed which is likely to escalate the alternative protein market revenue.

In August 2021, Hamlet Protein announced the launch of HP FiberBoost, a pure fiber product containing functional fibres produced specifically for dietetic use in piglets. The strategic initiative was aimed to enhance the company’s product offerings.

In April 2021, Archer Daniel Midland Company announced the opening of an innovation lab in Singapore dedicated to plant-based proteins. The strategic initiative was aimed to increase production of alternative proteins and meet the growing demand for food & beverages in the APAC region.

The alternative protein market report includes in-depth coverage of the industry with estimates & forecasts in terms of volume (Kilo Tons) and revenue in USD (Million) from 2022 to 2028 for the following segments:

The global alternative protein industry size had crossed USD 60.45 billion in 2021 and is projected to record an 18.5% CAGR between 2022 and 2028 driven by the thriving focus of feed manufacturers to come up with feed products that have high nutritional value.
The microbial-based alternative protein market is expected to surpass USD 41.75 billion by 2028, ascribing to the higher adoption of sustainable sources for food and animal nutrition.
The alternative protein market share from the food application segment is likely to exceed USD 186.5 billion by 2028 due to the growing consumer awareness regarding the harmful health effects of meat & meat products.
The alternative protein market in North America had crossed USD 10 billion in 2021 and is poised to observe a 17.5% growth rate through 2028 owing to the increasing need for nutritious ingredients and the growing consumer attention toward preventive healthcare.
Customize this Report
Inquiry Before Buying