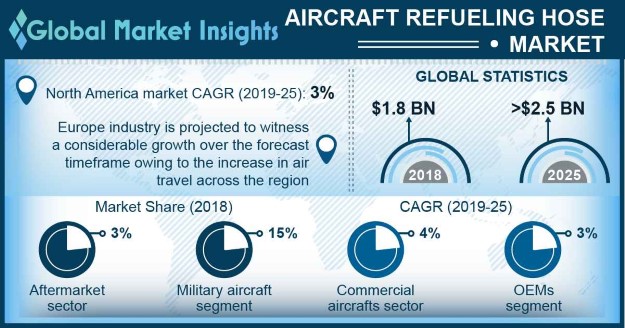 The rising aircraft production due to increasing air passenger traffic along with proliferating defense budget across the globe are boosting the aircraft refueling hose market size over the projected timeframe. The ability of these systems to easily refuel aircraft in land and even in air during flight journey coupled with a significant reduction in flight journey downtime further supports the industry size expansion over the projected timeframe.

Governments across the globe are increasing their defense budget and expenditure to strengthen their military operations. For instance, the U.S. government announced a defense budget allocation of around USD 716 billion for 2019. Moreover, the expansion of commercial aviation due to increasing air passenger traffic is providing a positive outlook for the aircraft refueling hose market. For instance, Boeing announced a delivery of 806 aircraft in 2018, reducing backlogs and enhancing their business share.

Advancements in technologies along with stringent regulatory norms require industry participants to continuously invest on R&D for boosting their revenue share. Industry players are continuously investing on innovative technologies and partnering with scientists and research organizations for developing advanced systems and expanding their aircraft refueling hose market size. For instance, in 2016, Russian scientists announced the development of an advanced laser refueling system capable of fueling aircraft and small satellites.

The aircraft refueling hose market is expected to witness strong competition owing to the adoption of multiple strategies including new product development, mergers & acquisitions, and portfolio diversification by industry participants to gain higher visibility in the market. For instance, in 2016, Husky Corporation completed its acquisition of S.U.R.&R, a supplier of refueling parts and repair kits. This strategy enabled the company to offer a range of aircraft refueling hoses along with products and repair services in the aftermarket. 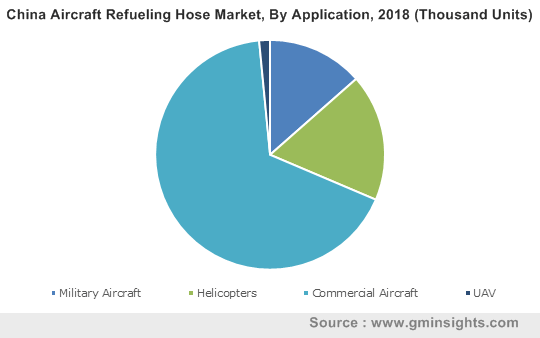 Military aircraft accounted for a considerable volume share at around 15% in 2018. This can be attributed to the rising military expenditures across the globe. Industry players are focusing on introducing technologically-advanced and lightweight aircraft refueling hoses for improving the system efficiency. Additionally, the advent of aerial refueling systems along with probe and drogue refueling technologies with hoses contribute significantly toward improving operational efficiency and reducing flight downtime.

Helicopters was valued at over USD 300 million in the aircraft refueling hose market size in 2018. This can be credited to the increasing demand across diversified applications including tourism, military, and personal travel. Additionally, the ability of helicopters to perform diversified operations including vertical take-off & landing along with easier manoeuvring & hovering around places with limited open areas will expand the business share.

Commercial aircrafts grew significantly at around 4% CAGR over the forecast timeframe. The improving tourism sector along with the rising disposable income are some of the major factors boosting the commercial aircraft industry growth. The proliferation of low-cost aircraft carriers offering expanded air travel networks across multiple countries at affordable fares is enhancing the aircraft refueling hose market size. Airliners are continuously investing on expanding their aircraft portfolio for catering to the growing air passenger traffic. For instance, in 2019, Brazil-based Azul announced the renewal of its aircraft fleet with new orders of Airbus A320neo and Embraer 195-E2 aircraft.

OEMs will grow significantly at around 3% CAGR in the aircraft refueling hose market size. This can be credited to the rising aircraft production and deliveries across the globe. OEMs are continuously focusing on introducing lightweight and durable hoses with a focus on improving safety and complying with stringent regulatory norms. Moreover, advancements in materials along with superior fire resistance capabilities are few major advancements in aircraft refueling hoses, contributing to the increasing segment share.

The aftermarket aircraft refueling hose accounted for a revenue share at around 3% in 2018 owing to the requirement for periodic repairs, which may lead to replacement in these aircraft. Additionally, stringent regulations mandate the replacement of such components & parts to ensure appropriate refueling, expanding the segment share. The continuous usage of these hoses contributes significantly towards wear, tear, and probable cracks in the materials, further accentuating the segment growth. 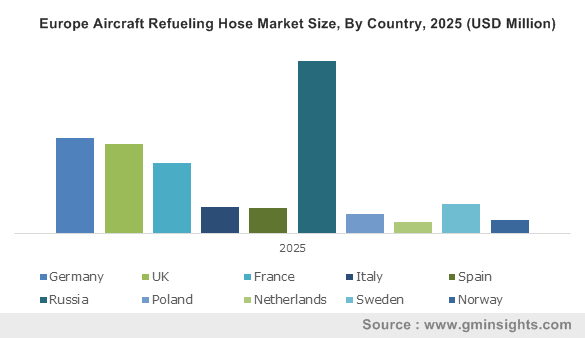 The Europe aircraft refueling hose market size will grow significantly owing to the rising air travel across the region. The proliferating air passenger traffic owing to the rising demand for low-cost air carriers along with improving tourism sector will further expand the reginal share over the study timeframe. Airliners across the region are focusing on expanding their aircraft fleet for catering to the rising air passenger traffic. For instance, in 2017, Surf Air announced the expansion of its network routes and business aircraft fleet with innovative, low-cost, and subscription-based all-you-can-fly-model to target a wide air traveling customer base.

North America will account for a significant share in the aircraft refueling hose market size. The proliferating defense budget along with the rising air passenger travels are some of the major factors supporting the regional growth. For instance, the U.S. Pentagon is proposing a defense budget amount to USD 718 billion for FY 2020. Moreover, Canada defense expenditure accounted for around USD 16 billion in 2018, positively influencing the regional share over the study timeframe.

Aircraft refueling hose market players are developing innovative processes that contribute towards offering reliable aircraft refueling hose with higher efficiency. Additionally, manufacturers are also focussing on introducing lower weight hoses that contributes positively towards improving the system efficiency. Rising demand for advanced hoses through retrofitting from regions such as North America and Europe due to higher consumer spending on business jets and military jets is further strengthening the market size. Moreover, industry players are expanding their operations and production facilities for maximizing their revenue. For instance, in December 2015, Apache Inc inaugurated its new production and distribution facility in Dallas, Texas for producing aircraft refueling hoses.

The market size of aircraft refueling hose was valued at USD 1.8 billion in 2018.
The industry share of aircraft refueling hose is estimated to exhibit over 4.5% CAGR from 2019 to 2025.
Surging air passenger traffic on account of availability of low-cost airlines and a booming tourism sector are driving the deployment of aircraft refueling hoses in Europe.
Eaton, Parker Hannifin Manufacturing, JGB Enterprises, Delafield Corporation, Husky Corporation, Apache Inc. and Aero-Hose Corp are some of the major industry players.
Strict regulatory norms are encouraging manufacturers to invest in R&D to introduce safe and compliant aircraft refueling hoses which will have a positive impact on the industry size.
The OEM distribution channel segment in the market will grow significantly at around 3% CAGR till 2025 led by advancements in materials along with superior fire resistance capabilities.
Customize this Report
Inquiry Before Buying